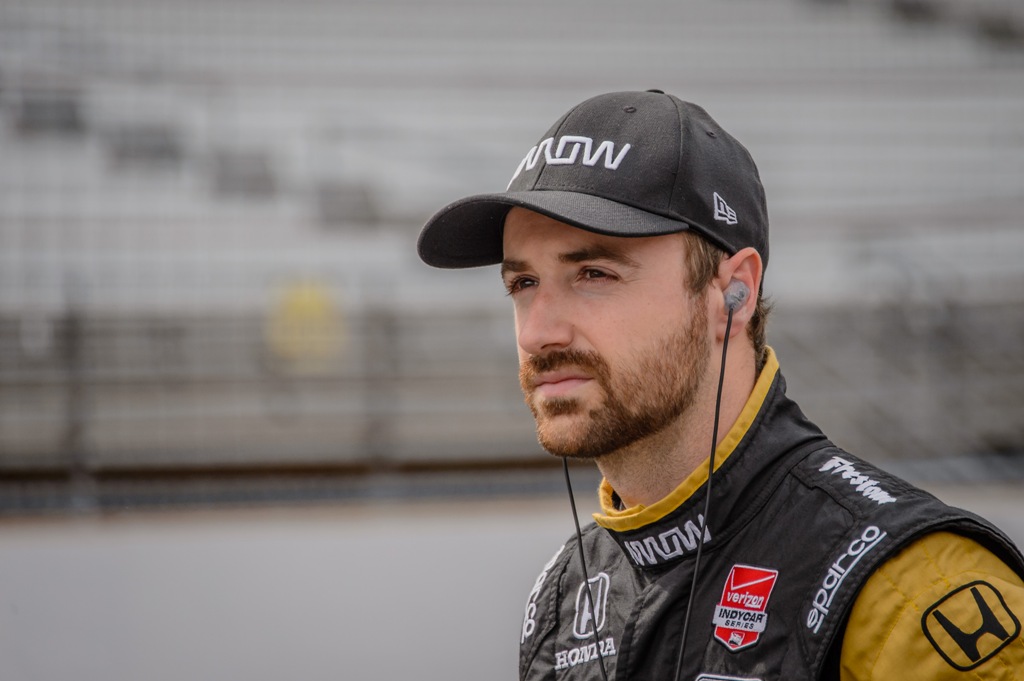 James Hinchcliffe, who is well known on the track and off as simply Hinch, was hurt last May in the Monday practice right before the Indianapolis 500 when a piece of his car broke, sending him into the wall. Hinchcliffe suffered an upper thigh and pelvic injury, as a result of piece of the car’s suspension impaling his leg in the crash. Now eight months of grueling recovery and physical therapy Hinch is happy to report that he is 100% healthy with no lingering effects from the accident and 100% focused on the 2016 Indy Car season and all it has to offer.

Looking back on the crash, Hinch is very grateful to the Haboto Safety team who were the first responders to the accident. When the piece of suspension impaled him, it had him pinned inside of the car. So when the safety team arrived they had to quickly figure out how to get him unpinned and into the ambulance without him losing a lot of blood in the process. Notably, they were able to get him out of the car slowly and get him into the ambulance and stabilize him so they could transport him to the hospital and get him immediately into surgery.

His time with the media also revealed something else that wasn’t known at the time, in that he suffered a massive neck injury that he didn’t think was going to heal and that he wouldn’t be able to hold his head up while inside the race car.

Continuously he is asked if he remembers anything about the accident, or if he realized afterwards that he would never get back to driving. Speaking with the media recently, Hinch told us that he recently had dinner with his surgeon, something he has done quite a few times since his surgery. He says every time he sees the surgeon he gets a better understanding of what happened and what he went through, and he learns something new about the timeline. He added that every time he hears about it from him and the further away he gets from the actual event, the more he appreciates it the gravity of it and the more he respects all the people that helped save his life.

He has shown his appreciation back in many ways, thanking the staff for what they did, and recently gave back. Right after the accident on the way to the hospital Hinch received multiple blood transfusions as well as during his surgery and after. Recently following media day, he held a blood drive at IMS and took to his social media accounts to encourage people to give blood if they could.

Through the aftermath after the incident, he says he was so focused on getting back in the car that he didn’t think of care about anything else.

Now that he is set to return to driving this year, we can all expect to see the same entertainment that is known for. It seems Hinch is the king where social media is concerned. He has Facebook, Twitter, Instagram and Periscope (those that we know of) as well as his own website and beer and on his various social media sites, he is the comical wise guy. Despite keeping it fun and entertaining, he states it can be stressful at times.

“It’s incredibly stressful,” he said. “You’re trying to be as funny as Josef, which is not possible. You’re trying to be as sports knowledgeable as Graham and relates to other sports, which I just don’t have. I’m struggling to keep up with some of my colleagues here. But it is a fun element, for sure. All of us sort of grew up in this era of social media in sports. I think it’s something that all three of us enjoy and take to. Having that direct connection to the fans is awesome, sometimes very cruel, sometimes uncomplimentary, brutally honest as well.

“But you do get a lot of support from there. I think back to when I a kid and I was a fan of the sport, if I could have tweeted my favorite driver and gotten a reply, that would have been incredible. It’s a fun time for us to be drivers and for the fans as well.”

How does being popular on the track as well as off like on social media change from him being Hinch the driver to Hinch the comical wise guy? He says given the fact that as a IndyCar driver and athlete, he is a role model to someone and that puts a lot of pressure on him because before social media the fans saw how he performed on the track and then his interview after a race, but now with social media the fans have 24/7 access to him. Therefore, he has to be mindful of what he says and posts and mindful of the audience that follows him.

Now returning to the cockpit of his racecar, there’s no doubt that his eye will be set on winning races, including the 100th running of the Indianapolis 500 when he returns to Indianapolis Motor Speedway in May.

When asked what it would be like to win the big 100th 500, Hinch replies, “In a lot of ways I think it would be the same as winning the 94th or the 105th. It’s the greatest race in the world. Is it cool to say you won the 100 hundredth? Yeah. But does it really matter? No. We try to win it every May.”