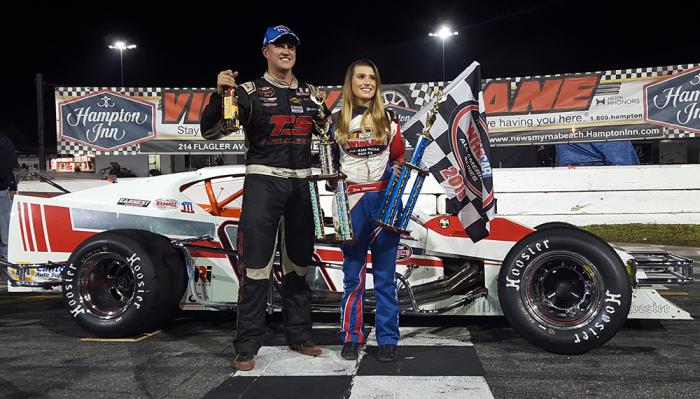 NEW SMYRNA, Fla. – Ryan Preece had an easier week at this year’s World Series of Asphalt Stock Car Racing than he did last year.

The result was the same.

Preece dug himself into a hole the first night out last season and spent the week battling for the top spot. Fast forward to one year later, where the 25-year-old, Berlin, Connecticut, driver collected two wins and two runner-up finishes in the week’s four races.

“Winning a race with Richie Evans’ name on it, it really means a lot to me,” said Evans of the Modified legend and NASCAR Hall of Famer. “That’s somebody, when you think Modifieds, you think Richie Evans. I’m a little young, so I wasn’t fortunate enough to race in Richie’s era. But you can type into YouTube and see some of the things he did. He really was an amazing driver. So to put my name on a trophy that has his name on it means a lot to me.”

Preece will make his debut at Daytona International Speedway Saturday in the NASCAR XFINITY Series.

Preece entered Friday’s Modified race holding a six-point race on Justin Bonsignore in his quest to defend his Modified championship at New Smyrna. He didn’t show any signs of stress though, after qualifying fourth and starting fifth after an invert of the top eight spots. Preece quickly gaining the lead over pole sitter Jimmy Zacharias on Lap 6 in Turn 3.

The 2013 NASCAR Whelen Modified Tour champion continued to extend his lead over Zacharias and Wednesday’s winner, Eric Goodale. A Tommy Catalano spun on Lap 60 to bring out the first caution flag of the night. That brought the field down pit lane for tire changes and adjustments.

Bonsignore briefly took the lead on the restart, only to have Preece rocket back into the lead a lap later and built up a four-car length bumper over his competitors.

“Just kind playing the tire strategy but at the same time keeping track position,” Preece said. “When it came time to go on that restart, once we got tires, we had to take off.”

Goodale tried to bring out some late race heroics on Lap 95, but Preece was too strong.

“The car felt like it had everything we needed it to have,” said Goodale, who didn’t make any adjustments on the pit stop. “Ryan just had a really good car today. I gave it everything I had those last 20 laps; just came up a little bit short. The last two or three years down here, Ryan has just had a really good short-race setup in that thing and the caution fell right into his lap there.”

“I think if a caution came out, I would have been right up there with them,” Bertuccio said. “I had great forward drive. The guys did a helluva job this week putting a fast race car underneath me.”

Fourteen-year-old Raphael Lessard earned his first major stock car win in the 35-lap PPG Pro Late Model feature. Lessard was able to hold off Cole Anderson and Daniel Keene Jr. on the way to the victory.

Cody Stickler made it three in a row earning the Florida Modified victory by a straightaway over Travis Eddy, Alan Brun, Josh Todd and Cameron Ray and expands his point lead headed into tomorrow’s finale.