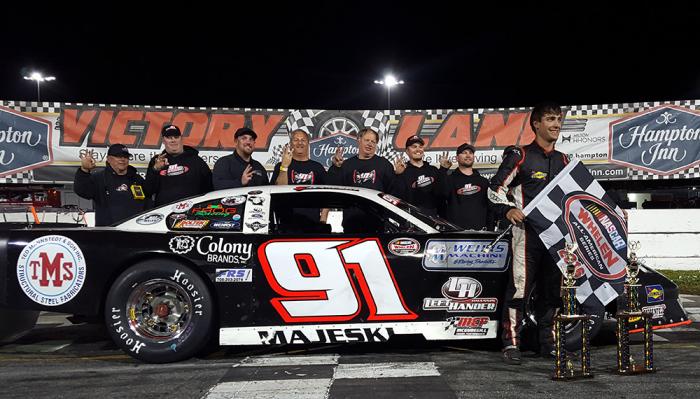 The 21-year-old Seymour, Wisconsin, native led for the entirety of the Southern Paint 100 in Honor of Bruce Gowland to take home the victory and the 2016 Super Late Model championship in the 50th Annual World Series of Stock Car Racing.

“The car was flawless,” said Majeski, who was second to Harrison Burton Thursday in a physical 35-lap battle. “Some of the circumstances that took place (Thursday) kind of lit a fire under us. We came out firing today.”

Majeski had three wins and three second-place finishes in six races to easily out-distance Burton, 344-320. The 15-year-old Huntersville, North Carolina, had a pair of wins. Stephen Wallace, who opened the series with a win, finished third, a point behind Burton

“It’s really special,” said Majeski. “I felt like we were in really good position to win it last year and, with two races to go, broke a left rear trailing arm bracket, hit the wall in Turn 3, and ended our week early. It feels pretty good to come back down here and defend the way we ran last year, and even improve on it.”

Majeski said his team came out with a whole new setup. The newly minted champ started the race in the second position but quickly gained the lead on the outside as the green flag waved.

Even a brief early yellow didn’t slow Majeski. Burton started a charge to the front and took the runner-up spot from Stephen Nasse on Lap 25. Majeski, though, wasn’t fazed and built a 6.6 second lead on Burton and had the majority of the field down a lap.

Another caution brought the field together on the Lap 83 lap. Under yellow, Burton, who was still running second, pitted out of second-place due to fluid on his windshield. The 2016 NASCAR K&N Pro Series East Sunoco Rookie of the Year contender, rallied to finish sixth.

As the field went to restart, Dalton Armstrong missed a shift on the start and caused a six-car pileup. Undaunted Majeski blew away the field on the restart on Lap 88, and had a three second margin of victory on runner-up Brad May as the checkered flag waved.

Daniel Keene Jr., finished fourth to earn the Pro Late Model championship while Derek Thorn came out victorious in the series final race of the week.