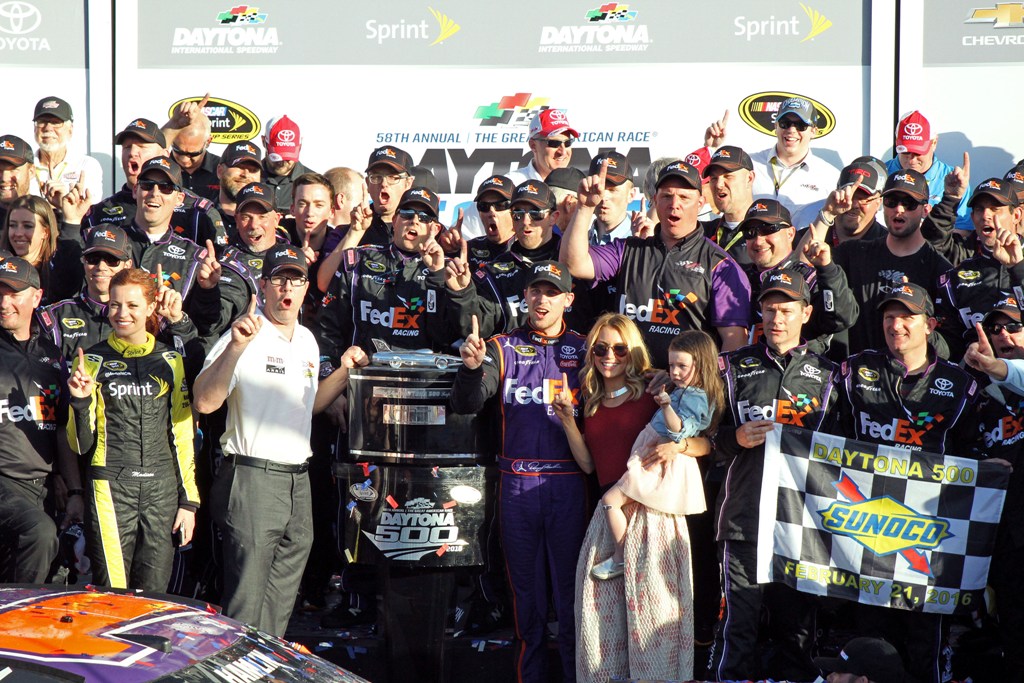 Every stock car driver and crew chief’s ultimate dream is to one day win the Daytona 500, and while not everyone is lucky enough to win the Great American Race, but rookie crew chief Mike Wheeler did so in his first attempt.

After a successful Speedweeks which included a win in the Sprint Unlimited, along with a fifth-place finish in Can-Am Duel No. 1, Wheeler and his driver Denny Hamlin went on to win the Daytona 500 after a last lap charge from fourth to the lead. It was Hamlin’s first 500 win, and Wheeler’s first Sprint Cup points race win as a crew chief.

Wheeler is known around the garage by many as a great engineer. Before becoming a crew chief, he was a lead engineer on Hamlin’s Cup car for more than 10 years, before going down to crew chief Joe Gibbs Racing’s No. 20 XFINITY Series car last year. Wheeler got four wins last year, three of which came with Hamlin. His success in the XFINITY Series propelled him to the Cup gig that won him his first 500, something that has been long in the making, and Hamlin has wanted for quite some time.

“I said, ‘Down the line we’re going to work together,’” said Hamlin, after the pair’s 500 win. “I knew he had aspirations to be a crew chief in the Cup Series. You can only be a great engineer for so long before other teams are going to come knocking. Joe gave him that opportunity in the XFINITY Series. Even though I probably premature promised him the job, a little soon, you know, I was happy that Gibbs said, Let’s just take you through the same process that all of our other crew chiefs had.”

Hamlin said he probably ‘promised’ Wheeler the job going back to the 2009 or 2010 season.

Hamlin and Wheeler worked together on two occasions last year – the XFINITY Series season when Hamlin ran a partial schedule, and a six-race swing in the Sprint Cup Series when Hamlin’s crew chief Dave Rogers was serving a suspension. A best finish of third in the Cup Series together last year proved why the pairing was a match made in heaven, amidst a stressful situation for them both. That experience together, along with Wheeler’s experience being an engineer on the No. 11 car is what helped pave the way to an early win, and what could help pave the way to more.

“You work your butt off all these years trying to get to this spot,” said Wheeler. “You put in the hours. You work your guts out trying to be the best. Finally have the opportunity to be the crew chief, lead the team, it’s really satisfying to see everybody so happy.”

Despite taking the big win in the Great American Race, Wheeler has remained his humble self.

“Seeing Denny say it’s his biggest race, biggest thing he’s got, makes me happy,” said Wheeler. “I’m a small part of this. Racing has a lot to do with the driver, the actual car, people that build that car, with the spotter involved. Just really happy to be a small part of that.”

“There’s something about Wheels that I felt was right,” said Hamlin. “Our communication is right. I think a lot of it is we’re friends first. Him being my crew chief, it’s a mere side-bar for our relationship. So this is one that I’m very proud and happy for him. He’s got a new family of his own that he gets to go back to. Like I said, this is my guy.”

Now that Wheeler and Hamlin are a winning duo in the Sprint Cup Series, it is no doubt that this year, the two will be a force to reckon with. They are a part of the hottest four-car team in the Sprint Cup garage, and the chemistry between the two is almost second nature. It’s no doubt these two of many more races to put in the win column.