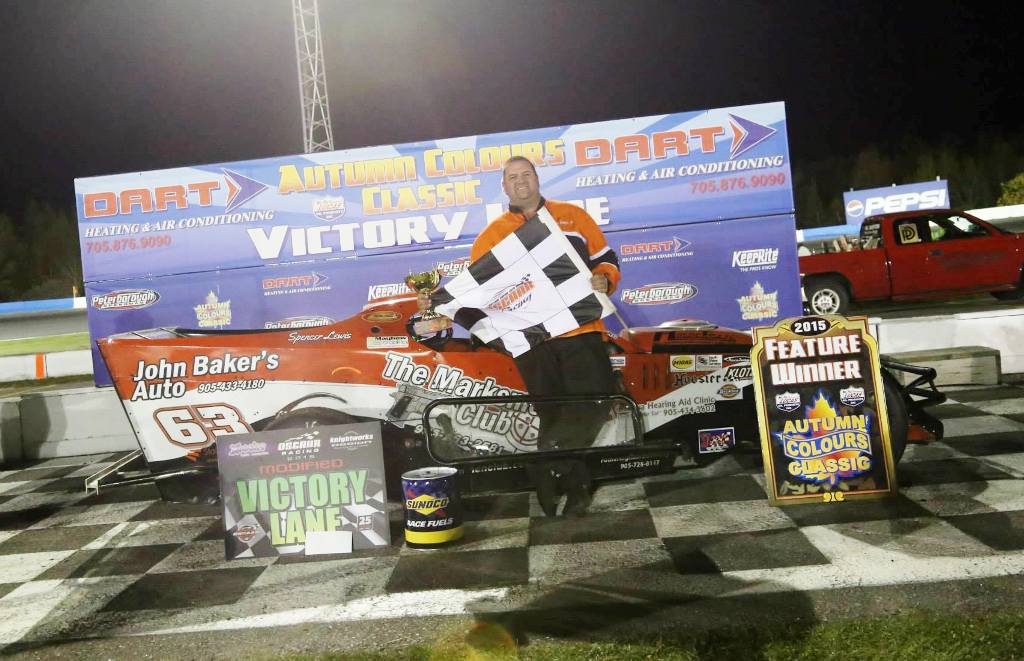 Coming off a solid season that saw him cap it off with a victory in the Autumn Colours Classic, John Baker Jr. is set for another season of modifed competition. With over 50 days till the start of the season, though, he has yet to lock down any firm plans.

“I’m not 100% firmed up anything for the season but I will be participating in OSCAAR and OMRS,” he said. “Unfortunately some of the traveling became more than I wanted so based on my finances, it will determine how many events I go to.”

A lot of eyes are on the driver of the The Marksman Club, John Baker’s Auto, Mills Pontiac Buick GMC, Ajax Muffler and Automotive, Oshawa Hearing Aid Clinic, Fatheringham Bookkeping, Ray’s World of Vending & Praxair Oshawa, Carstar in Coburg, Stare Study and Spencer Lewis Promotions Modified as he impressed in his rookie season of modified competition, finishing third in the OSCAAR Modified Series standings in 2015.

“Absolutely shocked and amazed with the top three finish last year’s points,” he commented. “If I can pull off a top three again this year, that will be spectacular. Last year I was hoping for top five and I got third, (so) maybe hoping for a three maybe I can do way better.”

Despite the success, though, things didn’t get go smoothly all year Baker, including a controversy surrounding post-race technical inspection after finishing runner-up at Delaware Speedway. There was also the challenge of getting used to how much traction the cars had and trying some different set-ups to find something that worked with a new ride. Looking back, though, Baker says it was an awesome season, especially when they hit on a strong set-up mid-way through the season.

The set-up showed in the second last event of the season, as Baker would score a heat victory at Sunset Speedway. Unfortunately, the race didn’t go as planned, though, as he would finish 11th due to hitting debris on-track mid-race. Still, Baker says the performance gave him confidence and momentum going into Autumn Colours.

The Autumn Colours victory was strong, “pretty amazing” in Baker’s eyes after a bad call from the flag man to put Baker to the rear of the field early in the event, stating he was involved an accident when he wasn’t. Baker also notes that there was some hiccups with tech as it was “almost uneventful”, which brought hope for some changes going into the off-season.

“I had hoped for them to bring the rules closer together for all the cars but it looks like there’s still more gray area in the rulebook then written down rules,” he noted.

With looking to repeat the same success in 2016, Baker will have a bit of a challenge on his hands as OSCAAR has switched to a chase/elimination format for the upcoming season.

“As for the new schedule, I don’t play football, I don’t play baseball or hockey – I don’t understand why we need to have a playoff typeset up,” he said. “My dad always said, ‘A championship is whoever got the best attendance the closest to the front of the pack all year long’. But knowing I will not be able to attend 100% of the races, it may play into my favor.