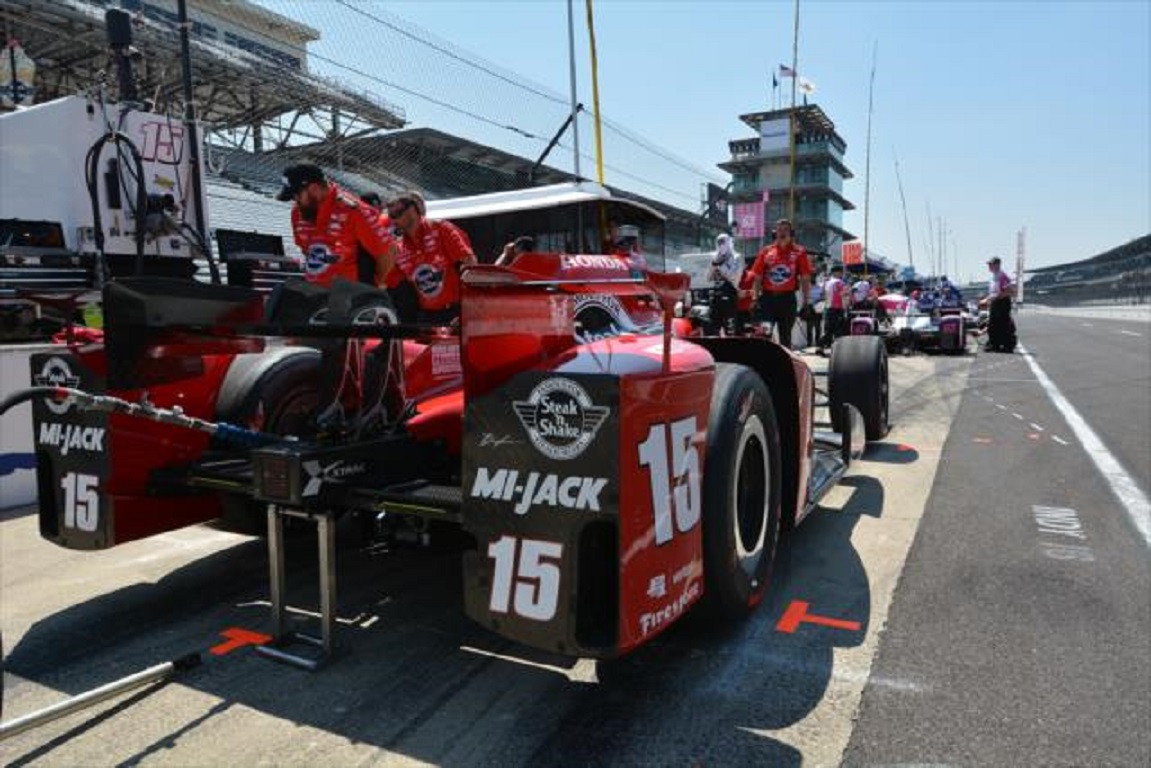 The final three rows of the starting grid for the Indianapolis 500 in recent years have not featured much in terms of firepower, despite the fact Oriol Servia did climb from 27th to fourth in the 2012 race. For the 100th running of the event, there is at least one legitimate threat located back in this portion of the grid in the form of Graham Rahal, who finished fifth last year and did charge from 29th to finish a career best third in 2011, so he has shown the capability in the past of being able to come from the back of the grid toward the front of it without issue.

For the other eight members of the final third of the 33-car field, making the field represents a personal win for them, especially in the case of Dale Coyne Racing’s Bryan Clauson who unlike the other starters in Sunday’s race is more used to running on dirt than on asphalt. With that in mind, let’s look at the prospects for the back of the order for the 100th Indy 500.

Pippa Mann: The only female participant in this year’s event did manage to post the fastest lap by a Honda driver in Monday’s final full day of practice, however looking ahead to Sunday that fact may not mean much if anything in how she may fare over the course of 500 miles. She has finished the race three times in her first four tries with a best finish of 20th in her rookie year of 2011.

Graham Rahal: The Rahal Letterman Lanigan Racing driver struggled again in time trials for the Indy 500 last Sunday, a common theme for the Ohio-native in recent years at the Brickyard. Still, with noted improvement from Honda’s engine and high speed oval aero kit from a year ago, a charge into the top ten if not better is certainly in the cards for the second-generation driver, who would like to match his father’s win here from three decades ago.

Matt Brabham: Just the third third-generation driver to compete at Indy behind both the Vukovichs and the Andrettis, the Australian has struggled for pace alongside his KV Racing teammates this past week. Brabham however, did claim two runner-up finishes in the 2014 Indy Lights championship on ovals so a surprise finish in the top half of the order after 200 laps is not impossible, but it would be a surprise.

Bryan Clauson: The Indiana-native has had tough luck in his first two starts at the Indy 500, finishing no better than 30th and crashing out of both events. The third time however, could be the charm for Clauson, who has his best ever starting position and perhaps the best car he has had since his rookie year with the former Sarah Fisher Racing squad. The work schedule will be busy though for “The Bullet,” he is planning on racing in USAC competition the night before the 500, so fatigue could play a role in whether he finishes 500 miles or not. However, finish or no finish in the Indy 500, Clauson is planning on racing later on Sunday night at Kokomo Speedway in another non-wing sprint car event as part of his goal to compete in at least 200 races in 2016.

Spencer Pigot: The defending Indy Lights champion has kept his nose clean in his first two outings in the Verizon IndyCar Series, but will face stiffer competition here at the Indy 500. Pigot appears to have put his accident suffered last Wednesday during practice behind him, although he like his teammate Graham Rahal is starting further back than he would have desired. Even with Pigot starting well behind top qualifying rookie Alexander Rossi, a challenge for Rookie of the Year honors could still be in play for the up and coming future prospect.

Stefan Wilson: There is no doubt a large number of the 350,000 plus fans expected to be at the Indianapolis Motor Speedway on race day will be pulling for a safe and strong performance from the younger brother of the late Justin Wilson. Although Stefan has struggled for pace so far this month, a steady effort could net a top half result in the right situation on Sunday.

Jack Hawksworth: The British third-year Indy 500 starter struggled again in qualifying and starts near the tail end of the field for the second straight year. After qualifying 13th as a rookie two years ago, the veteran’s performance has continued to back slide and unfortunately nothing in the present looking ahead to Sunday shows a potential change of direction.

Buddy Lazier: The 1996 Indy 500 champion’s 28th month of May at the Indianapolis Motor Speedway has netted his 19th start in the Greatest Spectacle in Racing. Although many feel he no longer belongs in the Indy 500, if the veteran can make the finish after 500 miles on Sunday, it would certainly be a personal victory for a family-run team that definitely does not feature the resources of the teams contending for the outright win.

Alex Tagliani: Sunday’s Pole Day accident has relegated the 2009 Rookie of the Year to the 33rd starting spot just like in his rookie start when he finished a respectable 11th. Could 2016 repeat that feat? We shall see.