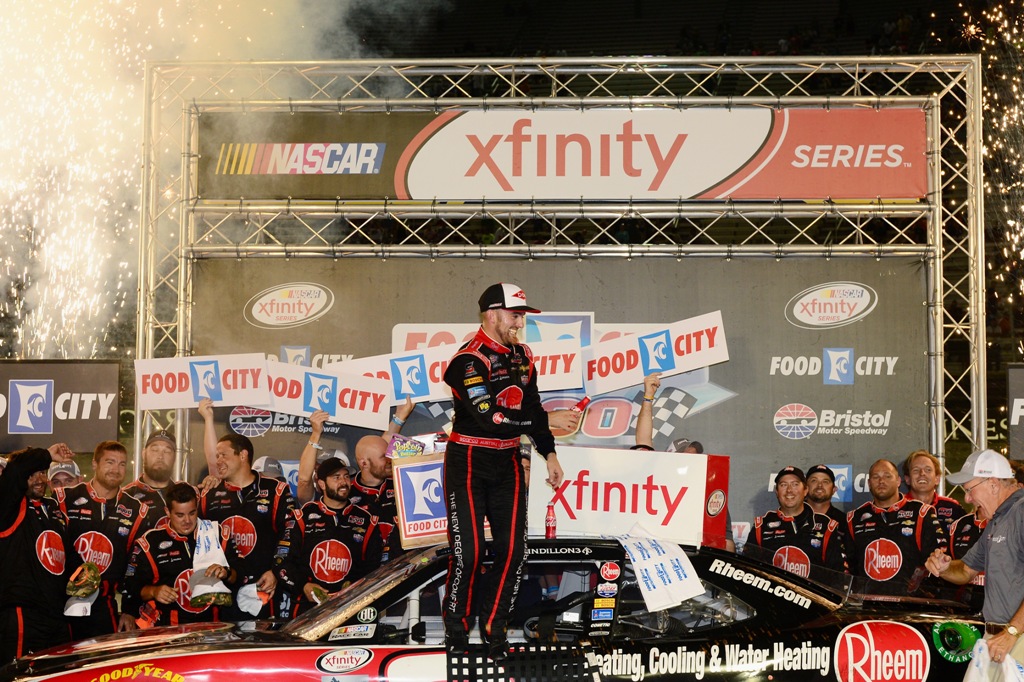 A checkered flag looked to be within Kyle Larson’s grasp until several late-race cautions put him behind the field. When all was said and done, it was Austin Dillon who came through to steal his second win of the season, and eighth of his career.

Larson led 200 of 308 laps, and looked to be in command of the race until a caution came out with just over 60 laps to go. Most of the field opted to pit and take tires, but Brad Keselowski and four other front runners would stay out. Keselowski assumed the lead, and held on to lead the race for 67 laps until Larson and Kyle Busch came charging up on him.

In the closing laps of the race, Busch made a daring move for the lead and when trying to slide up in front of the No. 22 of Keselowski, he slammed into Keselowski, and then the wall. A tire was cut on Busch’s car, and he was then hit hard by a frontrunning Ty Dillon, ending both drivers nights. Busch would finish 24th, while Dillon wound up 25th.

Despite suffering left front damage, Keselowski decided to stay out for the overtime restart knowing it was his only shot at winning the race. As NASCAR was readying for the restart, the No. 22 suddenly ran out of gas and started slowing suddenly. He made his way to pit road, and it was Austin Dillon who moved up to the lead.

Dillon held on to the lead, and was able to secure his first XFINITY Series short track win at Bristol Motor Speedway, despite leading only four laps.

“It was a war of attrition,” Dillon said post-race. “We had a pretty good car. We didn’t have the fastest but the car that won. I made a mistake in (Turn) 3 coming to the white once everybody got loose. I didn’t know which line to choose with the speedy dry.

“Just proud of these guys. Justin Alexander, it’s his first race as crew chief in the XFINITY Series and he gets a win. These short tracks have stumped me for a while. To get a win here, feels really good.”

Justin Allgaier finished second. The JR Motorsports driver was a lap down for a majority of the race, but utilized a free pass after the halfway point, and the late-race calamity to move up to the runner-up position. It was Allgaier’s third second-place finish of the season.

Dominant driver Kyle Larson finished a disappointing third. Larson’s still never won at Bristol, despite only finishing outside the top-five once at the track in seven starts.

While several of the XFINITY Series stars ran into troubles throughout the night, it was a night where underdogs were able to shine. Jeremy Clements running for his family-owned team picked up a sixth-place finish after running inside the top-five at various points in the race. It was Clements’ second top-10 of 2016.

Regan Smith finished 11th in his first start of the season after being involved in a few cautions, and Brad Keselowski took 12th after his late-race fueling issues that took him out of contention for his first win of the season.

A good night for a number of the underdog teams meant for a not-so-stellar run for some of NASCAR’s top teams. Pole winner Erik Jones and teammate Daniel Suarez were involved in a wreck together on Lap 244. Suarez finished 30th, while Jones settled for 34th. Roush-Fenway Racing’s Ryan Reed also ran into problems throughout the night, finishing 35th.

Elliott Sadler leaves Bristol with a 51-point lead over second-place Daniel Suarez. Suarez has one point over Justin Allgaier in third.