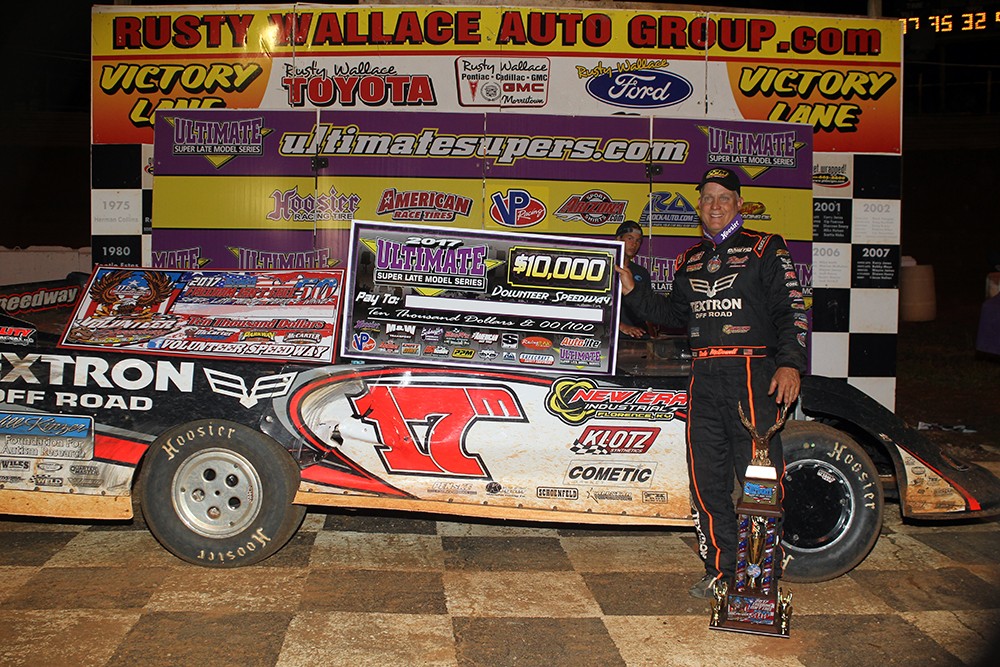 BULLS GAP, Tenn. (May 29, 2017) — We all know freedom isn’t free! The Memorial Day holiday weekend is the traditional kick-off into summer. But more importantly, it’s a time we all stop and pause to remember and honor the men and women who lost their lives or are missing in action from defending our country during wartime, either in the past or present.

Volunteer Speedway hosted the Ultimate Super Late Model Series on Monday night for running of the $10,000-to-win “Freedom Isn’t Free 50.” Dale McDowell of Chickamauga, Ga., powered into the lead on lap 29, and once out front never looked back en route to capturing an impressive victory.

Nothing excites the fans more than just pure speed, and they were in for a treat during Super Late Model qualifying. The existing track record holder was Wendell Wallace of Batesville, Ark., who toured the track at 12.001 seconds (120.004 mph) back on March 6, 1998.

But on Memorial Day 2017, that mark would be shattered by six drivers, who each dropped down into the 11-second bracket. The new Super Late Model track record holder is five-time Volunteer Speedway champion Vic “The Thrill” Hill of nearby Mosheim, who lowered the new standard to an amazing hold-your-breath 11.860. McDowell timed-in at 11.875, with Jimmy Owens of Newport third-quickest at 11.880.

“Wow, now that was an unreal adrenaline-rush,” said a smiling Hill after his record-setting new track qualifying record. “It’s incredible just how much we lowered the old track record. To go from a 12.001 down to an 11.860, that’s a huge drop. Over the years I’ve been one of many drivers that had flirted with establishing a new track record, but everybody had come up just a little short. When you think about it, it’s really amazing that the old record had stood since back in 1998.

“I’ve been fortunate over the years to have won five track championships here at ‘The Gap’ and also visited victory lane on many occasions, but as a racer – you’re always wanting to go faster and faster. We definitely went fast tonight. This is just an awesome deal.”

Ross Bailes of Clover, S.C., Brandon Overton of Evans, Ga., and McDowell each won heat races that determined the starting lineup for the 50-lap main event.

Bailes and Overton led the field to green from the front row, with Overton blasting out to lead over Bailes, McDowell, Owens and G.R. Smith. McDowell passed Bailes for second on lap 3 racing off turn two down the backstretch, while at same time back behind them Jason Welshan got around Smith for the fifth spot.

Welshan worked his way past Owens for fourth place on lap 9 as they raced off (turn) two. With Owens running the high-line and Shanon Buckingham down low, Buckingham made the pass for fifth on lap 13 between turns one and two. The event’s first caution flag waved on lap 16, when Travis Greer slowed up high on the track at end of the backstretch.

Off the double-file restart Overton throttled-back up to remain in the lead, but behind him Bailes got the advantage over McDowell to claim second in the running order. At end of the front straightaway on lap 19, Bailes drove in hard on the high-side and smashing the loud pedal he rolled around the outside of Overton as they raced off turn two for the lead.

Overton got out of shape between turns one and two on lap 22, which allowed McDowell to drive past him into second place. The race’s second and final caution waved on lap 28 for debris near entrance to the first turn.

Off the restart Bailes jumped the cushion between turns one and two, which allowed McDowell to drive past him into the lead, with Overton, Buckingham and Hill in pursuit. Once out front, over the final distance the 51-year-old McDowell, driving the Textron Off Road/Will Kinzer Foundation for Autism Research/Kinzer Drilling Company/Quality Natural Gas/New Era Industrial/Cometic Gaskets/Klotz Lubricants/Clements Race Engines/Sweet-Bloomquist Race Cars/Shane McDowell Racing/No. 17m Chevrolet SS, was up-on-the-wheel setting a blistering pace.

Overton dove to inside of Bailes on lap 47 as they raced into the third turn to take over the runner-up position. McDowell captured the win over Overton, Bailes, Buckingham and Hill.

“What an amazing track we had to race on tonight,” said McDowell while standing at back of his hauler in the pits following victory lane ceremonies. “I’ve ran many races here at Volunteer Speedway over the years, but hands-down this is the most awesome (track) conditions ever. Qualifying showed just how fast it was with the new track record. A lot of times when you have a track that is just really hammer-down fast, the racing action isn’t that good. But here tonight you had three distinctive grooves – you could run down on the very bottom, in the middle or up high in the banking.

“Our car was good, I mean really good. I’ve got to give my brother, Shane, a lot of credit for all the hard work he puts into preparing the equipment. But that’s what it takes if you’re going to be competitive and have opportunities to contend for the checkered flag. We’ve had a really remarkable Memorial Day weekend. We got a $5,000 win Saturday at Dixie (Woodstock, Ga.) Speedway, then won a $6,000 show Sunday at Rome (Ga.) Speedway, and now getting this $10,000 victory tonight at Volunteer Speedway.”

Anthony White was quickest in Crate Late Model qualifying over a strong field of 28 entries, posting a fast-time at 13.117 seconds to earn pole position for the $1,500-to-win feature. Anthony White and Cory Hedgecock led the field to green with White jumping out to the lead over Hedgecock, Ross White, Tim Byrd and Rusty Ballenger.

Anthony White and Hedgecock were battling for the lead, with fans on edge of their seats with two- and three-wide action taking place all back through the field involving Ross White, Byrd, Ballenger, Greg Martin, Philip Thompson, Todd Morrow, Bryson Dennis, Jordon Horton and Tim Maupin jockeying for real estate around the high banks.

Dennis spun in the fourth turn on lap 12 to bring the caution out, and meanwhile on the backstretch Anthony White and Hedgecock tangled and spun down again the inside wall. Tempers were heated between the duo once they climbed from their machines, forcing track officials and security to intervene.

On the ensuing restart Ross White led Byrd, Horton, Morrow and Thompson. Back under green conditions for just one circuit, Byrd and Horton got together exiting the second corner and wrecked, forcing everybody behind them into evasive maneuvers as the yellow (caution) waved.

With Ross White on the point for the restart, he was trailed by Morrow, Martin, Thompson and Ballenger. Having a clear track ahead of him, “Ross the Boss” was all business as the final 12 laps ran caution-free to the checkered flag. Ross White, from Knoxville, held on for the victory over Morrow, Thompson, Ballenger and Maupin.

On the first attempt to start the Sportsman Late Model feature, a multi-car tangle in the second corner involved front-row starters Aaron Guinn (pole winner at 13.151) and Matt Tharp, and behind them Heath Alvey, Chris Coffey, Cody Gloyne, Brandon Taylor, David Bullington and others were caught up in the aftermath. All except Taylor and Bullington would be able to continue.

The second try at green proved to be successful with Tharp taking the lead over Guinn, Alvey, Coffey and Andy Ogle. Guinn got around Tharp for the lead on the second lap, and three circuits later Alvey passed Tharp for second place, with Ogle also overtaking Coffey.

Alvey got loose between turns one and two on lap 11 almost spinning, which allowed both Tharp and Ogle to slip past him for position.

Guinn was in control out front holding a comfortable lead over Tharp and Ogle. Racing into the first turn on lap 14, Ogle got to inside of Tharp to take over second in the running order and with the door open, Alvey also passed Tharp on the backstretch. Just two laps later, disappointment for leader Guinn as he spun to bring out the caution.

Going back green the leader was Ogle, followed by Alvey and Tharp. Though Alvey stayed glued to Ogle’s rear bumper as the laps wound down, he was never able to mount and serious threat to make a pass for the lead. Ogle, from Gatlinburg, captured the victory over Alvey, Tharp, Coffey and Warren McMahan.

Chris Rickett and Brett Miller of Greeneville battled for the lead over the first 14 laps of the Modified Street feature before Rickett suddenly slowed with mechanical issues on the backstretch to bring our the caution, thus moving Miller out front. Following the restart Miller had his hands full with young hard-charger Austin Atkins over the final six laps of the race.

The veteran Miller hung on for victory by narrow margin of .010-seconds over Atkins, with Michael Woods, Wayne Rader and Shannon Emery rounding out the top five finishers.

Did Not Start: Skylar Schmalzried #7