Concord, North Carolina (May 31, 2017) – Coming off Memorial Day weekend Venturini Motorsports and the ARCA Racing Series presented by Menards are gearing up for the series return to Elko Speedway on Saturday, June 3 for the Shore Lunch 250. 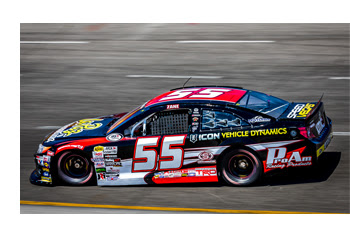 Saturday night’s feature under the lights will mark the fourth overall series appearance at the Minnesota short track and first since 2014.

Five races into the season the team returns to ARCA competition touting a strong lineup of teenage drivers featuring Zane Smith, Christian Eckes and Natalie Decker. The trio of drivers return to the track after each delivering strong results in their last series starts two weeks ago at Toledo Speedway.

Driver of VMS’ No.55 La Paz-Icon Vehicle Dynamics – Musselman’s Toyota, 17-year old Zane Smith, is riding momentum after posting a career best third-place finish at Toledo during his last series start. With only a handful of ARCA races to his credit the talented Huntington Beach, CA cites experience and consistency as major keys to his improvement.

“I’m really happy with my progression early on in the season,” said Zane Smith. “I started off running decent at Nashville and Salem in-between Daytona and Talladega – and we put together a really solid day at Toledo – there’s no question we’re getting stronger each week.”

“This is a great series and I’m constantly learning behind the wheel. Seat time and consistency cannot be overlooked. The level of competition in the ARCA series is stout – there’s a lot of great cars and drivers – guys like Austin Theriault, Dalton Sargeant, Shane Lee and a bunch of others have got a lot of series experience. Every lap I run I’m catching up – leveling the playing field – gaining more experience and confidence.” 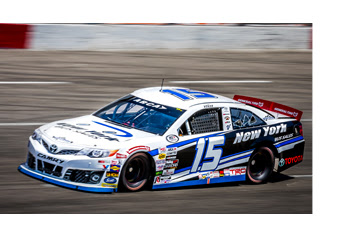 Christian Eckes, back behind the wheel of his No.15 New York Bus Sales Toyota, is preparing for his fourth short track event of the season driving for Venturini Motorsports. Eckes, ever so close to breaking out in the ARCA Series has put together a solid start to his 2017 season.

Among the early season series leaders in laps led with 134 in just three races, Eckes has become a legitimate contender each and every week he straps himself into his racecar. In just seven career series starts the Middletown, NY native has improved his stats earning four top-10 finishes including three-in-a-row this season.

“We are so close to our ultimate goal,” said Christian Eckes. “I’ve got nothing but high praises for this team and my crew chief Jeff McClure. We seem to unload fast off the truck and show our strength early on in each race. We’ve led a lot of laps but just haven’t closed the deal.”

“Coming to the track and showing a lot of speed is a big confidence booster. We’re right up there competing for the win every weekend. I know we’re close – and this weekend’s track could be when we get it done. Small, bullring type tracks like Elko really seems to fit my style of driving. We’ll be ready Saturday night,” added Eckes. 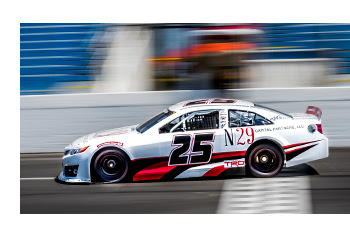 Natalie Decker, of Eagle River, Wis., will be making her second career ARCA start, having debuted at Toledo with an 11th-place finish last time out. Decker, a fan favorite will again pilot VMS’ No.25 N29 Capital Partners Toyota.

“The nerves are gone,” said Decker with a smile. “I put a lot of pressure on myself to perform at Toledo. Not saying I’m not going to put the same pressure on myself again – sure, the nerves and excitement will still be there but I’m a lot more prepared and confident going into this weekend at Elko.”

“Unlike my first start I’m going back to familiar race track – I’ve got four or five starts in my super late model at Elko and know how to get around the track. It’s very similar to a lot of tracks I’ve grown up racing on here in the Midwest – being smooth, consistent and patient are the keys to being fast this weekend.”

In addition to Decker’s current string of ARCA races (Toledo, Elko and Pocono) with VMS, the nineteen year-old driver announced last week the addition of the August 27th Road America event to her season schedule. Road America based in her home state of Wisconsin will be Decker’s first ever career road course race.

The Shore Lodge 250 is the sixth race of the 2017 ARCA Racing Series presented by Menards season. The one-day event at Elko Speedway begins with practice from 1:30 to 3 p.m., followed by General Tire Pole Qualifying at 5 p.m. The Shore Lodge 250 is scheduled to begin at 8 p.m. and will be televised live on MAVTV and ARCAracing.com will provide live timing and scoring. All times local, Central.

Tom Hessert Preps to Knock off the Rust, Ready for Springfield’s Dust