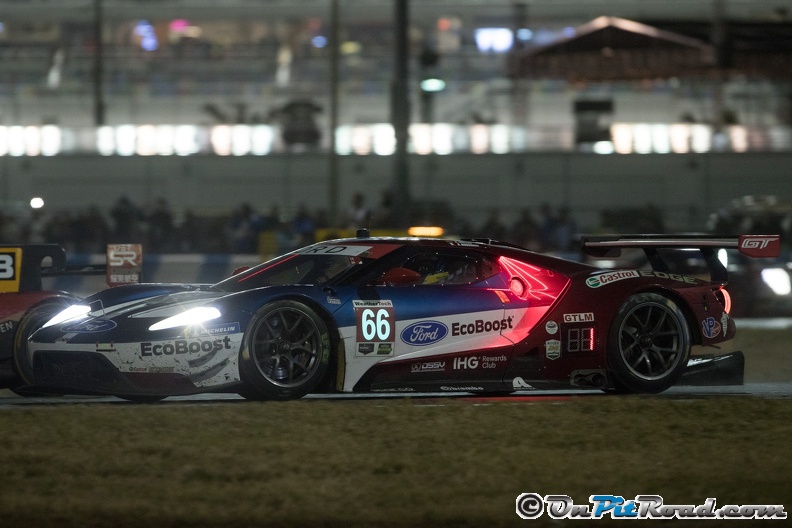 Activity on the track began to pick up shortly after the sun set. The biggest story in the first half of the Rolex 24 is tire punctures.

Notable cars with tires issues include the No. 23 United Autosports Ligier LMP2 and the No. 10 Konica Minolta Cadillac. The one constant with these punctures is that they were all the right rear tire. With a rate of one puncture an hour, Continental Tire put out a statement on Twitter.

The front of the pack has looked similar to the first 6 hours.

One of the favorites to win this year that has had issues is the No. 10 Konica Minolta Cadillac DPI, which started on the pole. They suffered a punctured tire around the 9th hour while Jordan Taylor was driving. The No. 10 is currently moving around between the 9th – 11th position.

Another favorite to win that ran into issues is the No. 23 United Autosports Ligier LMP2. They also dealt with a right rear tire puncture while Phil Hanson was driving. By the time the damage was repaired, the No. 23 lost a few laps. Then in the 11th hour, while Fernando Alonso was behind the wheel, he suddenly went to the put then got out of the car. The car was pushed back to the garage and was diagnosed with a Brake master cylinder failure.

The Two Chip Ganassi Racing Fords have dominated the class for the first half of the race. The two Fords are the only cars on the lead lap.

One of the more interesting developments that’ve happened so far in the race involves the car that dominated the class for the first third of the race. The No. 29 Montaplast by Land Motorsports Audi had to serve a five minute penalty for refueling faster than expected. The explanation IMSA gave for the penalty was “the car displayed a level of performance outside of the accepted tolerance.”

The top spot has changes hands multiple times since the penalty took the No. 29 out of contention. Currently the top 5 cars are the only on the lead lap.