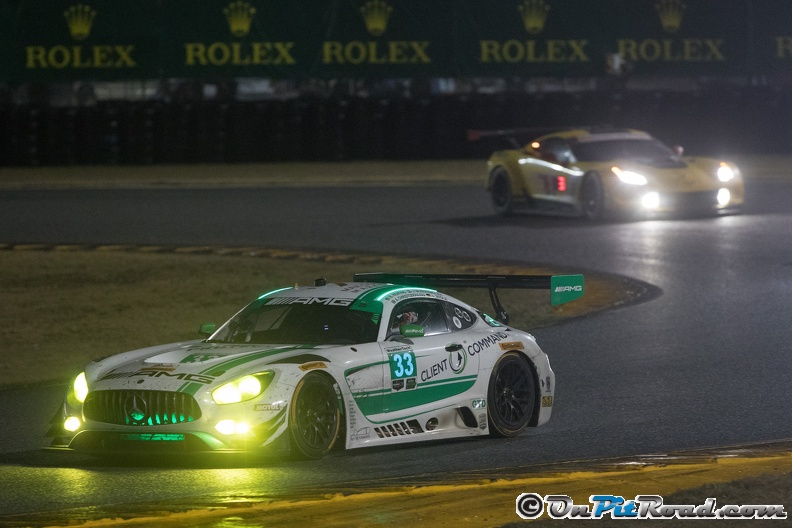 As usual with the Rolex 24 at Daytona International Speedway, survival through the night has been key, despite only four full course cautions.

As the race reached the morning hours, several cars have run into issues that have effectively ended their chances at victory, including several contending prototypes.

The class of the field throughout the entire race has been Action Express Racing, who have minimized mistakes through 18 hours. While their main competitors in Team Penske Acura have stumbled, they have not.

Action Express’ No. 5 Mustang Sampling Cadillac DPi, through their advantage of having a large lead of teammate Mike Conway in the No. 31, was able to take Christian Fittipaldi behind the wall for a short time during the fourth caution for planned maintenance to the car.

The prototype class is amazingly the only class in the field to see any retirees, and it’s seen its fair share of retirements in the 20 car class. Likely the most notable of them is the most recent retirement – the No. 10 Konica Minolta Wayne Taylor Racing Cadillac DPi.

The entirety of the GTLM race has been dominated by the two Ford GTs of the No. 66 and No. 67. Though recently, the two Fords switched places.

Most of the race has been led by the No. 66, but the No. 67 was able to take the top spot for a short lived period of time.

One Corvette seems to be in the hunt for the win, but it may need the Fords to have an issue to make any true headway.

With six cars still on the lead lap in GTD, it seems to be the most competitive field heading to the end of the race. Leading the way is the No. 33 Mercedes-AMG GT3, with a small margin over the rest of the lead lappers.

Closing in over the last few hours has been the No. 48 Paul Miller Racing Lamborghini, which initially had questions of engine reliability going into the race on Saturday.