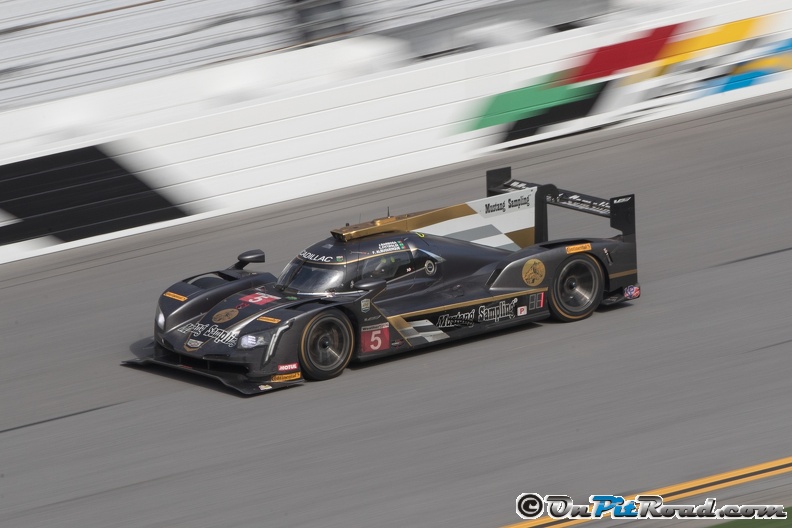 The Prototype and overall winner was the No. 5 Mustang Sampling Racing Cadillac with Filipe Albuquerque behind the wheel. He won with co-drivers Christian Fittipaldi and Joao Barbosa.

The race only had four full course cautions, but that doesn’t mean there wasn’t any action on the track.

There was a handful of instances later in the race where cars in one class got aggressive with cars in other classes., including a drive-though penalty given to the No. 6 Team Penske Acura of Juan Pablo Montoya for hitting the No. 29 Montaplast by Land-Motorsport Audi off track.

The No. 5 Mustang Sampling Racing Cadillac continued to dominate the Prototype class in the last six hours of the race.

Their demanding lead, which was maintained by Filipe Albuquerque, gave them a comfortable lead all the way until the end.

For Albuquerque it was redemption after a late-race penalty cost he and Action Express a chance at the overall win in 2017.

Second place stayed the same from with the Action Express team car No. 31 Cadillac being driven by Stuart Middleton and Mike Conway in the closing stints. They had a comfortable gap to the third-place car allowing Action Express to 1-2 overall.

Two more Prototypes retired before the conclusion of the race. The No. 77 Mazda Team Joest Mazda and the No. 2 Tequila Patron ESM Nissan DPi brought the total number of Prototypes out of the race to 7.

Ryan Briscoe drove the No. 67 Ford GT to first place in the GTLM class. It was Briscoe’s second class win at the Rolex 24, previously winning with Corvette. Teammate and four-time Verizon IndyCar Series champion scored his third Rolex watch, while long-time IMSA competitor Richard Westbrook won the legendary race for the first time.

The No. 67 battled with the other Ford Chip Ganassi Racing entry for the entire GTLM race. The two Ford GTs dominated without much competition from the rest of the class.

The No. 11 GRT Grasser Lamborghini Huracan GT3 got the win in the GTD class after Mirko Bortolotti was able to gain distance from the competition.

Bortolotti was challenged late as Jeroen Bleekemolen closed on in him, getting to within a second of the leader with less than 20 minutes left in the race. Bleekemolen, however, had to bring his Mercedes-AMG GT3 to the attention of his crew for a late splash of gas.

The GTD class was the most competitive for the majority of the race but at the end of the race it was the Lamborghini grabbing the win. The victory marked the first time a Lamborghini has won the 24 Hours of Daytona.