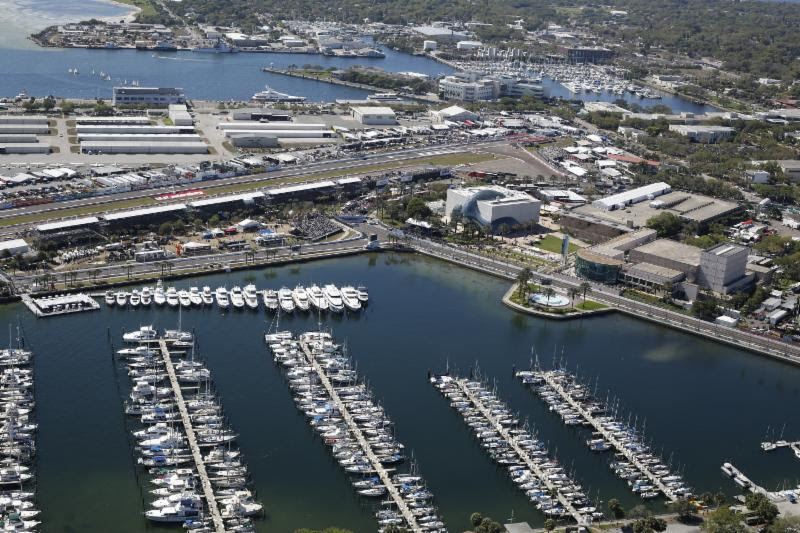 The commencement of the race track build was highlighted by a visit today from Team Penske’s Verizon IndyCar Series driver Will Power.  No one has been faster on this track as Power has claimed seven of the last eight pole positions during qualifying for the Firestone Grand Prix of St. Petersburg.
In total, 18,000 feet of steel reinforced concrete block will be positioned resulting in more than 20 million pounds of concrete being moved.  Lining the track is 22,000 feet of chain linked fencing with a steel cable reinforcement system.  Over 12,000 tires are used to build the track’s tire wall safety system.  Seven grandstands for spectators and four bridges for infield access are constructed.
“Along with the great support and cooperation from the City of St. Petersburg, our crew gets more efficient with the construction and tear down process.  We started the build process even later this year inside 30 days from the start of the event,” said Kim Green,co-owner, chairman and CEO of Green Savoree Racing Promotions, organizers of the Firestone Grand Prix of St. Petersburg.  “The streets of St. Petersburg are converted into a world class racetrack while preserving the beautiful waterfront scenery for a worldwide TV audience to experience.”
Track tear down will begin immediately upon conclusion of racing activity on Sunday, March 11.  The removal of all supplies and equipment is completed within two weeks.
Headlined by the Verizon IndyCar Series, the green flag will drop on 11 total races during the Firestone Grand Prix of St. Petersburg weekend.  The 110-lap IndyCar feature is set for Sunday, March 11, with an approximate start time of 12:30 p.m. EDT.  Reminiscent of and inspired by the popular open-wheel cars from the early 1990s, this will be the debut event of the new, sleeker Indy car aerodynamic body kits into competition for the 2018 season.
Single day tickets start as low as $20 for Friday, $35 for Saturday and $50 for Sunday.  A weekend General Admission ticket offers the best value at just $55.  A single day Reserved Seat is available for $100 in upper rows and $75 in lower rows, while a three-day Weekend Reserved Seat is $135 in upper rows and $105 in lower rows.  Junior pricing is available for ages 12 and under.  For full pricing information and to buy tickets, visit gpstpete.com or call 877-725-8849.
ABOUT FIRESTONE GRAND PRIX OF ST PETERSBURG
Entering its 14th year, the Firestone Grand Prix of St. Petersburg is run on a 1.8-mile, 14-turn waterfront circuit that includes a combination of adjacent downtown streets circling Pioneer Park, the Duke Energy Center for the Arts, The Dali Museum and extending onto the runways at Albert Whitted Airport, which overlook the Tampa Bay and picturesque St. Petersburg Harbor and Marina. Scout.com’s Stadium Journey named the Firestone Grand Prix of St. Petersburg as #2 on the list of “Top 100 Stadium Experiences of 2016.”  The event is owned and operated by Green Savoree Racing Promotions, which also promotes Honda Indy Toronto (July 13-15, 2018), The Honda Indy 200 at Mid-Ohio (July 27-29, 2018) and Grand Prix of Portland (August 31-September 2, 2018).
Tags: indycar