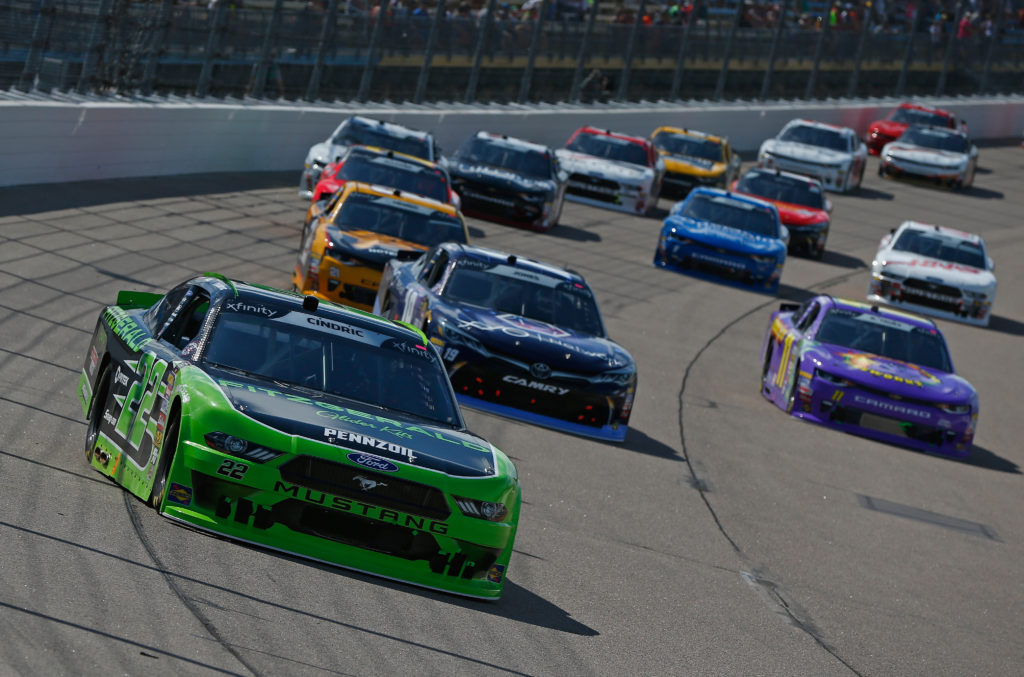 The Monster Energy NASCAR Cup Series was off this past weekend, if you didn’t notice.

Both the NASCAR Camping World Truck Series as well as the NASCAR XFINITY Series had their chance to shine instead, racing at the 7/8 mile Iowa Speedway, and shine they did.

First up on Saturday evening, we were treated to a very competitive Truck race that saw lots of action and plenty of three-wide racing throughout the event. Tempers flared, drivers beated and banged and rooted each other out of the way for position, and the fans that were in attendance and watching on television were treated to an awesome event.

Several drivers were in contention for the win during the race and you truly weren’t sure who was going to come out on top. Harrison Burton, Matt Crafton, John Hunter Nemechek, Noah Gragson and Stewart Friesen all flexed their muscles at various stages of the race.

Ultimately, Iowan driver Brett Moffitt managed to grab the lead on the restart to kick off the final stage and he held off a hard charging Noah Gragson for his second victory of the season driving the No. 16 Destiny Homes Hattori Racing Toyota. Gragson drove it in deep on the final turn on the last lap and briefly passed Moffitt but wasn’t able to make it stick as Moffitt crossed back under to pass him coming out of turn four.

I truly felt the Truck race on Saturday was the best race of the season among the top-three NASCAR divisions. It was able to hold that honor for one day because the XFINITY Series race at Iowa was even better.

The racing was once again intense on Sunday with drivers going three- and even four-wide at times utilizing every inch of the racy Iowa Speedway. No matter where you looked on Sunday there was hard racing all throughout the field. But the duel between Justin Allgaier and Christopher Bell was some of the best racing I’ve watched in quite a long time.

Bell kept pushing the car further and further into the corner diving low trying to make the pass but Allgaier kept his car wound up around the top of the speedway just managing to hold Bell off every turn. Those two drivers negotiating lapped traffic, while battling for the lead, was a sight to behold. Coming to the white flag Bell ran the car very hard out of turn four and broke sideways, ending his chances of victory. It was a fantastic race with the drivers giving it their all and Allgaier was able to bring home the trophy in his No. 7 Brandt Professional Agriculture JR Motorsports Chevrolet.

Whenever the Cup Series has the weekend off, the attention naturally gets put on whatever else is out there for racing enthusiasts. The CWTS and XFINITY drivers knew they had the spotlight squarely on them this weekend, as did Iowa Speedway, and a grand slam home-run was delivered each race.

Something else of note about these two races that has been a topic of discussion this year is the fact that no Cup invaders were in these two events. Guess what? They weren’t needed, the races were great.

I think the majority of CWTS and XFINITY races this year that have not featured Cup drivers have, for the most part, been much better shows all around. With NASCAR looking to further reduce the amount of times that Cup drivers can race in XFINITY/CWTS in 2019, I think it’s pretty clear by now that the races without them have been much more entertaining.

If you missed either of the races from Iowa this weekend do yourself a favor and try to catch a replay of them or find them on YouTube. Of all the Cup/Xfinity/CWTS races this season, the two this weekend were the best of the year in my opinion. Maybe it’s time to start talking about getting the Cup Series to Iowa Speedway.