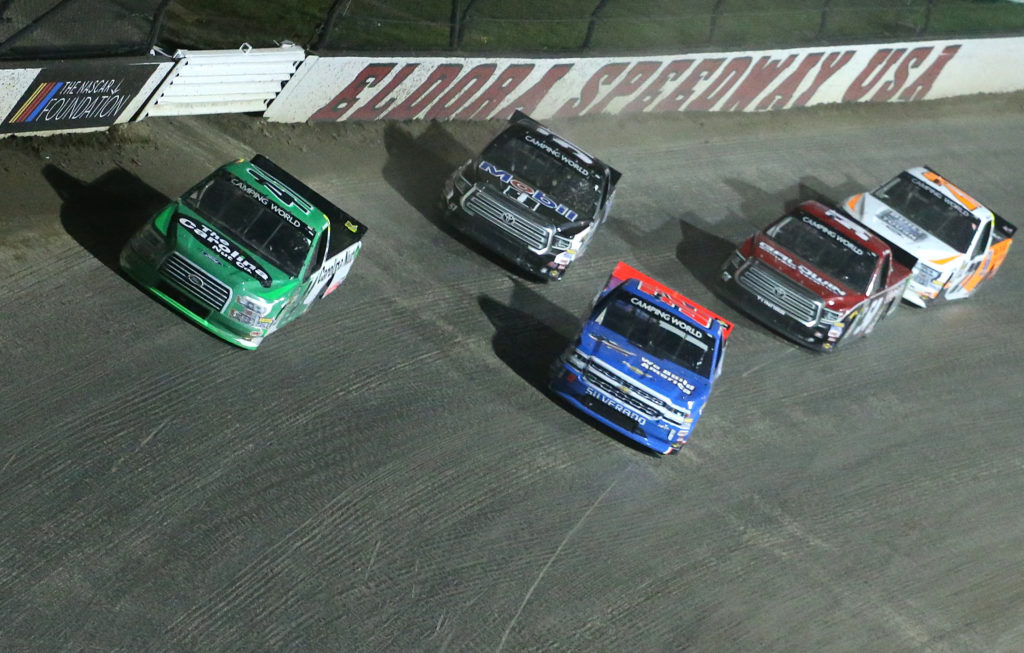 Another NASCAR Camping World Truck Series race at Eldora Speedway has come and gone, and once again, it proved to be full of action and excitement.

Teammates Chase Briscoe and Grant Enfinger crossed the finish line door-to-door, trading paint and bouncing off of the wall with Briscoe edging ahead for a 0.038 second victory in the 2018 Eldora Dirt Derby. The entire night was filled with hard-nosed, side-by-side racing all through the pack with the trucks able to race on nearly every inch of the half mile surface.

The 2018 race had seven lead changes among five different drivers.

Since the inaugural running of the event in 2013, the Eldora race has been one of the best races of the season.

What makes Eldora such a great race? I’ve been saying to anyone who will listen that the main problem with the Monster Energy NASCAR Cup Series is the fact the cars are going too fast, creating less exciting racing. When you can dial the cars back some, the racing tends to get tighter. Eldora is the perfect example of that. All the engine in the world won’t do you any good on dirt if you can’t translate all that power down to the track. With dirt, it’s all of a sudden less about the best engines and aerodynamics and more about putting it all in the driver’s hands. Many times throughout the 2018 race we’d see guys changing their line nearly every lap trying to find the fastest way around the speedway.

Hopefully another great dirt race will be the catalyst for NASCAR to at least expand the NCWTS schedule to include a couple of more dirt races per year. They don’t need to run too many dirt tracks and take the luster away from Eldora but I think they would be well served in looking at a couple of other dirt venues to bolster the truck schedule.

The prime two candidates in my mind are Knoxville, Iowa and the Dirt Track at Charlotte. Both of those venues have adequate seating to handle a NCWTS race as well as great facilities. Three or four dirt races on the schedule would really help flesh out the NCWTS schedule and make it feel more like grassroots racing, giving the trucks their own unique identity.

Tony Stewart, owner of Eldora, has been telling fans to put pressure on NASCAR to bring the Xfinity and Cup Series to Eldora as well. I’m all for dirt racing, even in the Cup Series. I’m not sure that a Cup race at Eldora is in the cards anytime soon but I definitely could see the Xfinity bunch having their own show at Eldora in the near future. In fact, if NASCAR starts listening to the likes of Dale Earnhardt, Jr. and Kyle Busch there would be many more short tracks on the circuit across the board in the coming years. I believe it’s long past time for Hickory to be placed back on the schedule for an Easter doubleheader extravaganza with the NCWTS and Xfinity cars both running the same weekend.

What kind of bizarre world are we in when dirt is being talked about as being part of the future of the sport? NASCAR got away from the dirt tracks as fast as they could after the inception of the series. Now, in 2018, fans, drivers, and owners are all asking for more dirt. The trucks certainly put on great races at Eldora so I’m all for more dirt in NASCAR.