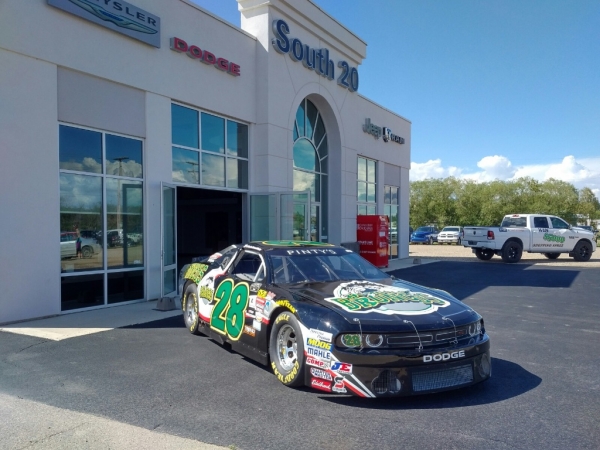 SUN PEAKS, BC (July 23, 2018) – Like all Canadians and others around the world, Jason White felt the need to show love and support to those affected in the aftermath of the tragic crash of the Humboldt Broncos team bus in April.

As the NASCAR Pinty’s Series arrives in Saskatoon, Saskatchewan for the annual stop at Wyant Group Raceway, White will be carrying a special “Humboldt Strong” tribute paint scheme on his #28 Powder Ventures car, continuing his show of support to the Humboldt Broncos team and all those affected by the terrible events.“Six months later so many people are still hurting after this awful crash” said White. “My friend and former partner Rob Zimmer at the Zimmer Auto Group and I got talking and we wanted to let everyone know that they’re still in our hearts. We’re here to help you and support you.”

Being part of this special project was equally important for Zimmer.

“Humboldt is 45 minutes from my hometown and I’m still a prairie boy at heart,” said Zimmer. “I’ve been fortunate in my life, things are good for me and I wanted to do anything I could to help and support those affected. I’m proud to do it,” he added.

Today Jason White has his #28 Powder Ventures/Humboldt Broncos tribute car on display at South 20 Dodge in Humboldt for a special ceremony.

Race team members become as close as family, just as those on Junior hockey teams do. It’s part of why White and Zimmer wanted to prepare this special tribute car for the race in Saskatoon.

“Rob (Zimmer) is from a small town in Saskatoon not far from Humboldt and has family that’s been affected by this tragic event. I’ve had a lot of emotion as well and we really want everyone to know they can count on us, we’ll continue to be here to aid you in any way we can,” said White.

Fans will be able to get up close for photos with Jason White’s #28 Powder Ventures/Humboldt Strong car at Wyant Group Raceway in Saskatoon, Saskatchewan this Wednesday July 25th when the NASCAR Pinty’s series arrives for their annual stop.