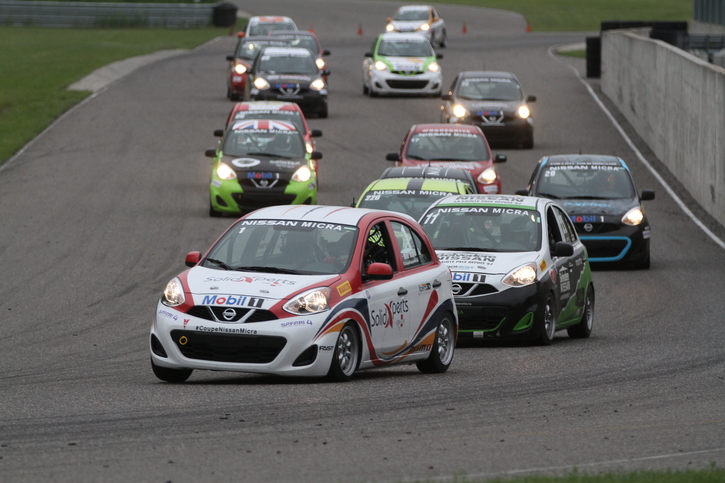 MISSISSAUGA, Ont. – This weekend, the Nissan Micra Cup will hold its third outing of the 2018 season. After contesting two events this spring in Ontario, the Micra Cup family will reunite at Circuit Mont-Tremblant in Quebec, where the inaugural rounds of the series were first held back in 2015. As one of the highlights of the summer, the Circuit Mont-Tremblant’s Summer Classic, draws thousands of spectators and families to watch the Micras end the first half of their season in the heart of the Laurentian mountains.

With three victories in four events, two-time champion Olivier Bédard (2015, 2017) is the standings’ favourite heading into the season’s midway point. He still has a challenge ahead though – keeping Kevin King at bay. With his victory at Canadian Tire Motorsport Park in May, King was only driver to successfully block Bédard from a perfect record in the first four events. He is also the only driver who can dethrone Bédard from the championship lead by the end of the weekend.

Third place driver and Senior Class leader Normand Boyer, as well as fourth place driver Valérie Limoges, will also be among drivers to watch vying for victory. Rounding out the overall top-five is Frédéric Bernier, who has been the surprise driver through the start of the season. The Quebec City racer got his start in motorsports through the Nissan Micra Cup and has continued to progress through the ranks in the first four races. Bernier is just one point ahead of Fadi Mourad, the top Novice driver.

Another competitor to follow at the Circuit Mont-Tremblant is 19-year-old Austin Riley. The young driver with autism made his series debut last year and has had a great start to his second season, battling in each race against much more seasoned drivers. Riley is currently in seventh position in the championship standings and will be attempting to claim his first podium finish this weekend.

The Summer Classic will also be the motorsport debut for four rookie drivers. André Lapointe, Frédéric Bouthillier, Perry Wener and Éric Chaput will all contest for the top rookie spot of the weekend.

In addition to the action on the track, fans will also have the chance to get up close to the Nissan Micra Cup drivers and team members in the paddocks at Circuit Mont-Tremblant. Canadian Micra owners can attend the event free of charge – with Nissan offering two entry tickets for each owner – and can also participate in a parade lap on the track on Saturday and Sunday.

Nissan Micra Cup drivers will take to the track six times between July 27-29. There will be two practice sessions on Friday, a qualifying race on Saturday at 9:30 a.m. and the first 30-minute race to follow at 1:30 p.m. Sunday will begin with qualifying rounds at 9:00 a.m. in preparation for a 1:35 p.m. race.