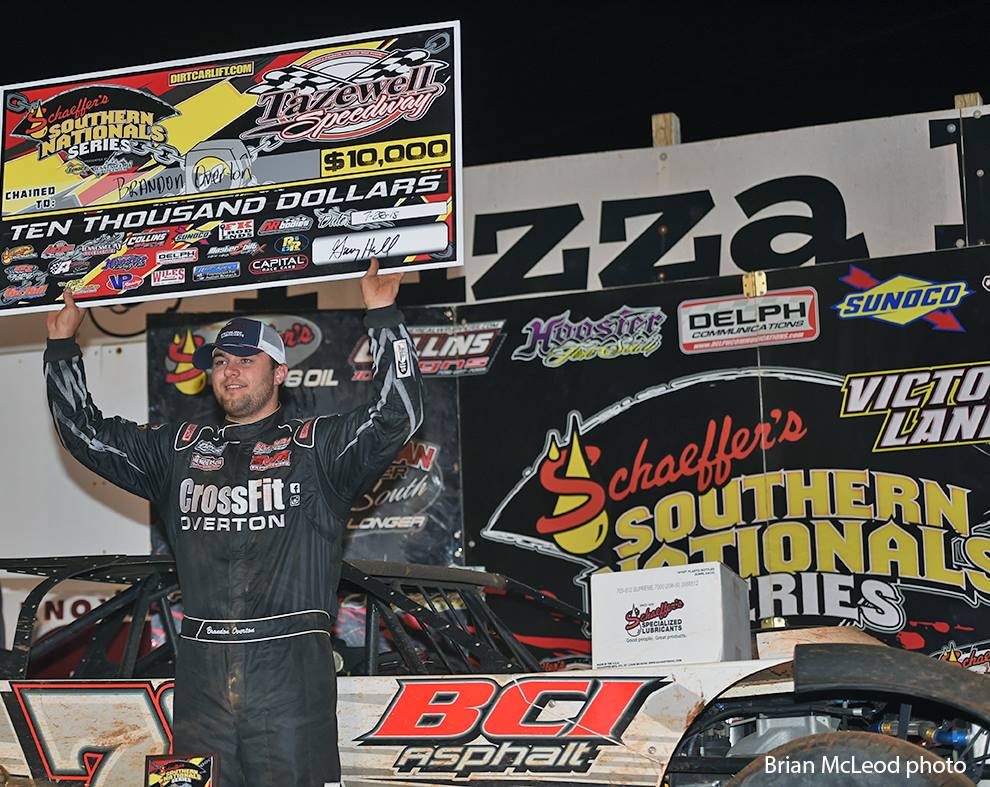 (July 28, 2018) Brandon Overton would lay claim to his fifth Schaffer’s Oil Southern Nationals Series by Sunoco and Tennessee RV payday, this time worth $10,000 in Saturday’s points finale at Tazewell Speedway during the Ray Varner Ford 53.

This was the tenth career victory for Overton, of Evans, Ga., while driving the Billy Franklin-owned, BCI Asphalt, Textron Off Road, Hoosier Racing Tire, RW Powell Construction-sponsored Clements Racing Engines-powered Rocket Chassis. Overton started eighth and marched through the field taking the lead for the first time on lap 32. He officially led twice in the main event.

Four caution flags slowed the 53-lap event. On lap seven, Kenny Collins would get on his roof after contact with another car on the front straightaway. On lap 21, race leader Dale McDowell would slow with a flat tire after contact with second place driver Michael Chilton. Chilton would gain the point for the restart and lead for the next ten laps. The caution would again fly on lap 30 as Steve Smith slowed with a flat tire. On lap 31, the final yellow would come out as Vic Hill came to a stop. Overton would overtake Chilton for the point on lap 32 and lead until Chilton would grab the top spot back on lap 44 as Overton had to check up in turn two. Overton would then retake the race lead on lap 50 and lead the remaining distance for the payday over fifth-starting Donald McIntosh, Chilton, Casey Roberts and Dale McDowell.

The Schaeffer’s Oil Southern Nationals Series presented by Sunoco Race Fuels and Tennessee RV would like to thank every race team, driver, promoter and track staff, sponsor and most of all the great race fans for their support in making the 14th annual Southern Nationals another great success.