Scott McLaughlin and Shane van Gisbergen head home locked in a 14-point, two-way battle for this year’s Virgin Australia Supercars Championship after the second race of the Vodafone Gold Coast 600 was abandoned this afternoon.

The two Kiwis emerged from a massive storm which halted the race twice before officials called a stop as the rain poured down and parts of the track all but flooded.

No trophies were awarded apart from Bathurst winners Craig Lowndes and Steven Richards taking the PIRTEK Enduro Cup as the winners of the endurance season. 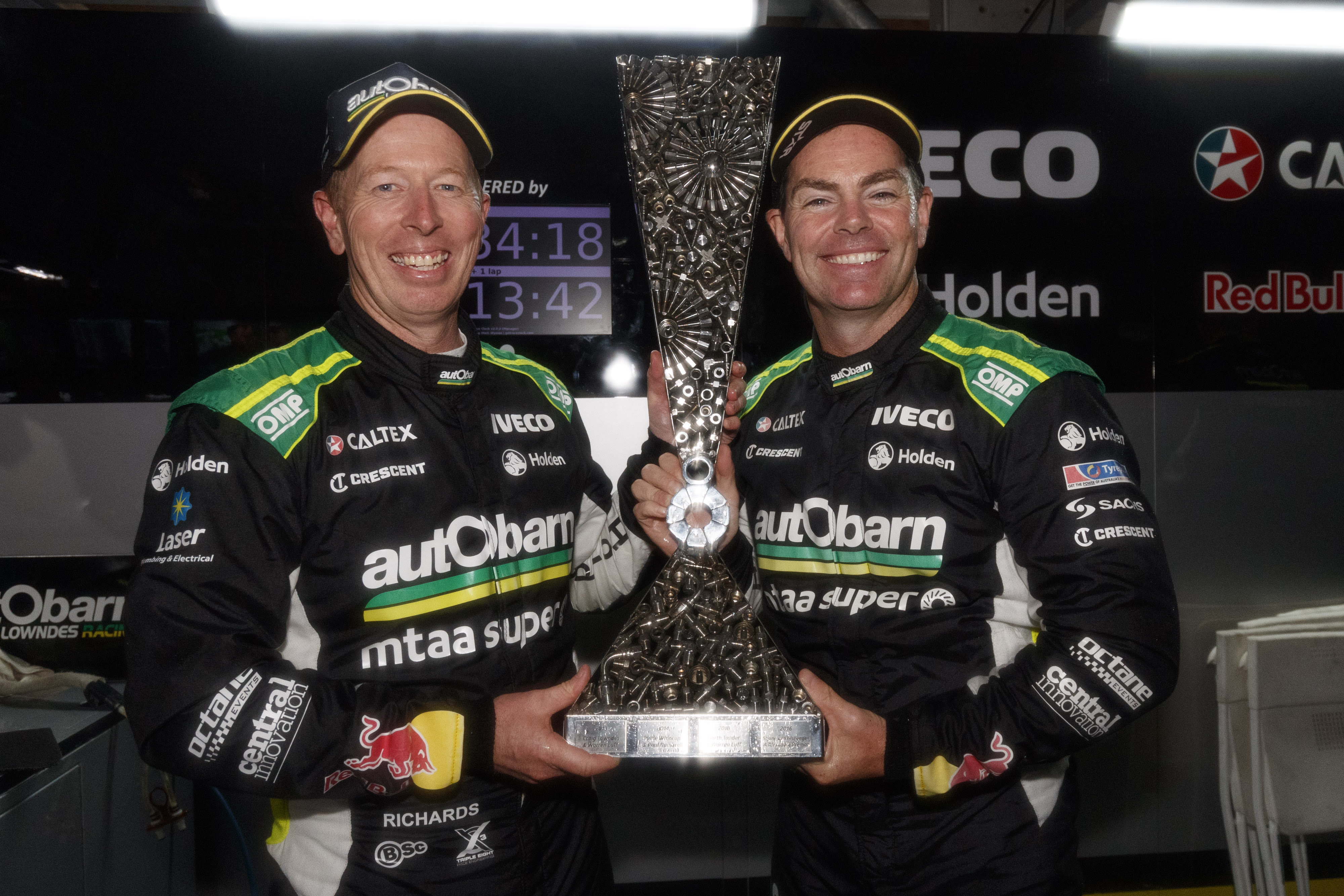 McLaughlin was two places in front of Van Gisbergen when the race was abandoned after the pair went toe to toe in an epic Saturday race.

“At the end of the day it’s safety first for everyone. It was pretty wet out there not just for us but for the officials,” McLaughlin said.

“It’s been neck and neck the whole time. Me and Shane are battling hard. Coming out of here we know they are going to be very strong to get the Championship lead is nice.

“You always pick up a little bit at home but it’s a pity the other bloke is a Kiwi as well. It’s going to be another battle there and we will keep pressing on. It’s a little lead but it’s a lead.”

Lowndes and Richards sealed the PIRTEK Enduro Cup with their third on Saturday and needing to only finish 14th or higher today. In the end there was no need. 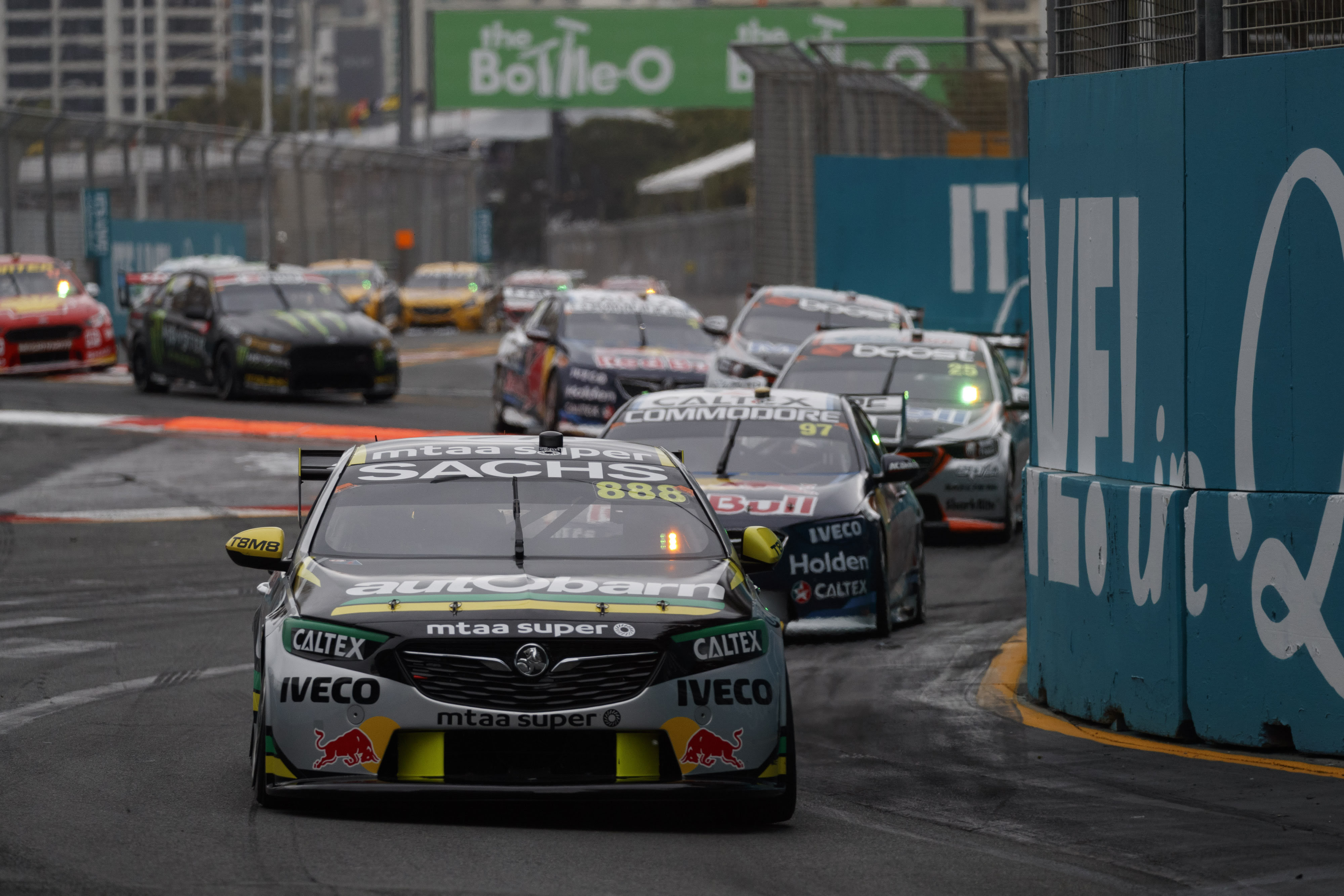 It was the last time the pair will drive together with Lowndes stepping away from fulltime driving next year. He will team up with Jamie Whincup or Shane van Gisbergen in next year’s PIRTEK Enduro Cup.

“It’s been a hell of a run. Last race with Richo it’s special to be able to take this (the PIRTEK Enduro Cup) back to the workshop with both our names on it.”

Richards would all but be assured of another co-drive next year, just not with Lowndes.

“Right from the outset when I first drove this car I couldn’t believe how good it was,” Richards said. “This was the one trophy I hoped to get hold off before I finished driving and here it is.”

With storms looming the pressure was on the co-drivers for a clean start before handing back to the primary pilots. As expected the storm came, forcing the race to be suspended at lap 37.

Standing water and rivers running across the track surface were the chief concerns, and a second attempt to restart proceedings only lasted another five laps behind the Safety Car.

The race was suspended again at 4:10pm local time, as the conditions further deteriorated.

It was ultimately cancelled at 4:25pm, 4:48pm AEST having been the time certain finish, declared a non-race with no points awarded.

The 2018 Vodafone Gold Coast 600 is proudly supported by the Queensland Government through Tourism and Events Queensland as part of the It’s Live! in Queensland events calendar. Queensland is just the place to experience Australia’s best live events.

Teams now begin preparations for their only international trip of the year, the ITM Auckland SuperSprint at Pukekohe Park Raceway from 2-4 November, the second last stop on the Virgin Australia Supercars Championship calendar.

Scott McLaughlin suffered his first blemish of his near-perfect Supercars season with an in-race penalty for taking out fellow Kiwi Shane van Gisbergen in the opening race of the Red Rooster Sydney SuperSprint. McLaughlin copped […]