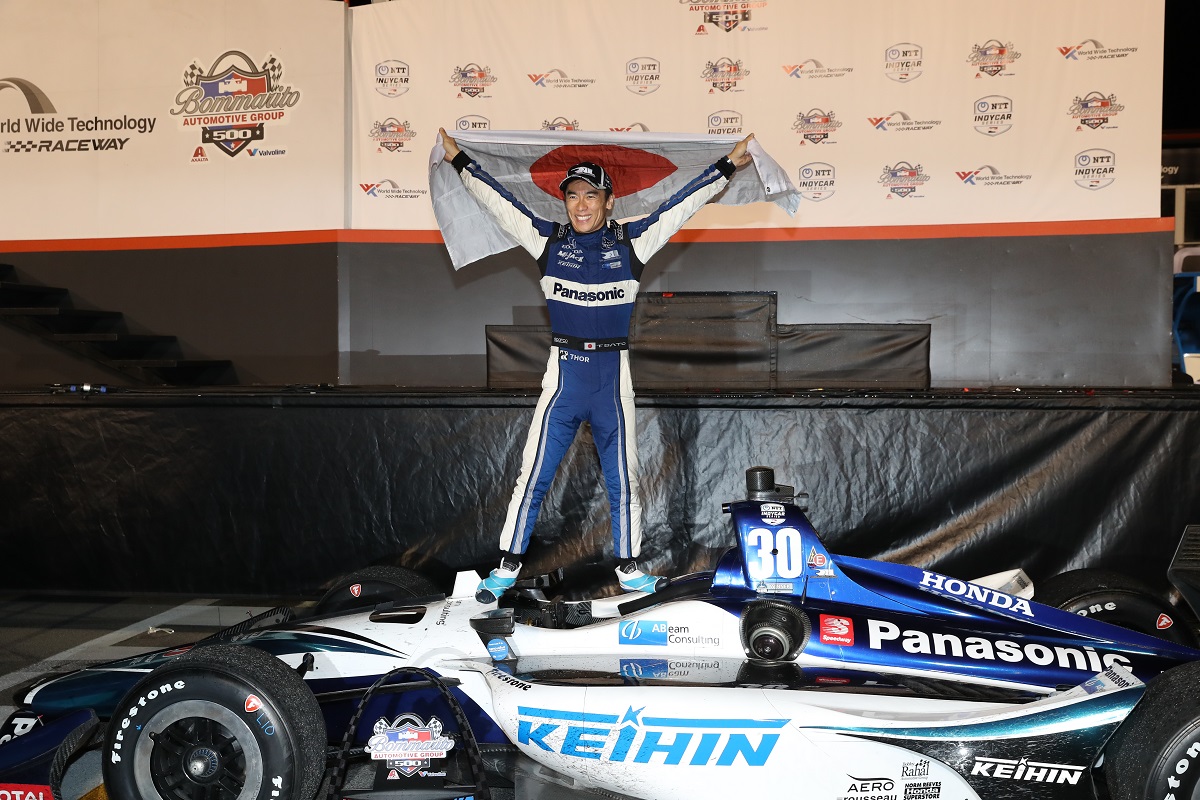 MADISON, Ill. (Saturday, August 24, 2019) – NTT IndyCar Series driver Takuma Sato hasn’t had many weeks as wild as this past one.

Sato qualified fifth for Saturday’s Bommarito Automotive Group 500 at World Wide Technology Raceway, dropped to last place after opening-lap contact with other cars in Turn 1 and battled back to win in the closest finish in this track’s 10-year history – 0.0399 seconds over Ed Carpenter.

The victory came six days after being the center of attention for his role in the first-lap, multi-car accident at Pocono Raceway that left his car upside down. But the Rahal Letterman Lanigan Racing driver stood his ground and focused forward, and that approach led him to his second win of the season, the fifth of his career and first on a short oval track.

Next to the 2017 Indianapolis 500 victory, Sato called this the most gratifying win of his career.

“Yes, I’m sure,” he said. “Winning (from) pole at Barber was very significant – just the domination of the weekend is always great credit for the team and satisfaction. But this win is so special – beside Indy 500, obviously nothing like (that). This is just so emotional. Gave me unbelievable boost.

Sato (No. 30 Mi-Jack/Panasonic Honda) might not have held off Carpenter (No. 20 Ed Carpenter Racing Chevrolet) had the race gone another corner much less another lap. Carpenter made a valiant charge in the final two laps to overtake Tony Kanaan (No. 14 ABC Supply AJ Foyt Chevrolet) and close in on Sato. The margin was the closest of the NTT IndyCar Series season.

“It could have been (different winner) if we had a little longer straightaway or another lap,” Carpenter said.

After Sato held off Carpenter at the finish line, all eyes turned to NTT P1 Award winner and championship leader Josef Newgarden (No. 2 PPG Team Penske Chevrolet), who had been swapping fourth place with rookie Santino Ferrucci of Dale Coyne Racing (No. 19 Cly-Del Manufacturing Honda). Ferrucci had drifted high a few laps earlier, allowing Newgarden to get past. But Ferrucci passed Newgarden back – apparently in tight form – and Newgarden spun in Turn 4.

Newgarden’s misfortune caused him to drop to seventh place, which cost him six points, but he will head to Portland International Raceway for next weekend’s penultimate race with a lead that has grown each of the past two weeks.

Ferrucci, who led a race-high 97 of 248 laps, scored his second consecutive fourth-place finish and the third of his rookie season, and it allowed him to move two points ahead of Chip Ganassi Racing’s Felix Rosenqvist (No. 10 Monster Energy Honda) for the lead in the Rookie-of-the-Year battle.

Conor Daly (No. 59 Gallagher Carlin Chevrolet) gave his team its best finish of the season in sixth place.