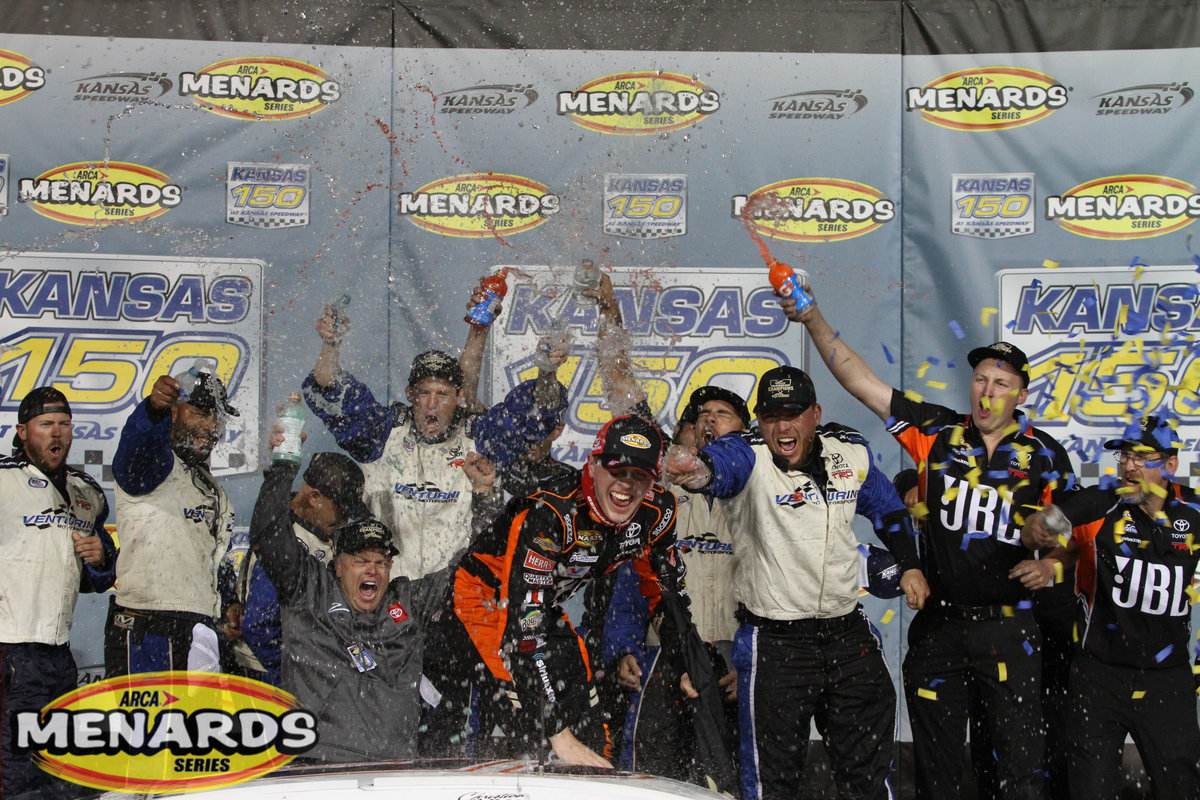 The ARCA Kansas 150 was a microcosm of the entire season for Christian Eckes. The Middletown, New York native was fast in practice, but engine issues necessitated a change following qualifying. That sent Eckes to the rear of the field for the start, but he quickly knifed his way through the field to the top five.

On a lap 57 restart, Eckes (No. 15 JBL Audio Toyota) challenged race leader Michael Self for the lead. One lap later, Eckes took control of the race, taking over the lead and driving away to, at times, a three-second lead.
“The day didn’t go smoothly at all,” Eckes said. “We had an engine problem in qualifying and the guys had to change it an hour before the race. We started at the back and we were in the top ten in five laps. The car was on a rail all night.”
Eckes night wasn’t smooth, and neither was his entire season.
After taking the championship lead after the second race of the season, at Five Flags Speedway, Eckes fell ill the night before the third race of the year at Salem Speedway. He missed the race, giving up the points lead to teammate Self.
Eckes and his Kevin Reed-led team were tenacious throughout the summer and fall, closing the gap and retaking the lead following the season’s penultimate race at Lucas Oil Raceway.
Eckes became the first series champion since Tim Steele in 1996 to miss a race en route to the championship.
“We even missed a race,” Eckes said in disbelief in victory lane. “The entire season has been filled with drama and we are still here. It’s absolutely incredible.”
Self (No. 25 Sinclair Lubricants Toyota) did all he could do to turn the tables on his Venturini Motorsports teammate. He jumped out to the lead at the start and led the first 57 laps, locking up five bonus points for leading a lap and by the halfway point clinching an additional five bonus points for leading the most laps.
But he couldn’t keep Eckes at bay. Self would end up second, 1.9 seconds behind at the finish.
“Second sucks,” Self said after visiting Eckes in victory lane. “I am thankful to have the opportunity to come and race for a championship. We won four times but we had a lot of ups and downs. I wish it would have turned out differently but I am really happy for Christian and the Venturini team. I just wish it played out in our favor tonight.”
The race was completed in one hour, three minutes and 31 seconds at a record average speed of 141.695 miles per hour. There were just two cautions for 12 laps, the first at lap 40 when Drew Dollar (No. 4 Dollar Concrete Construction Toyota) scuffed the turn four wall and the second at lap 52 when Tim Richmond (No. 06 GreatRailing.com Toyota) spun in turn two.
There was one lead change among two drivers, with Self leading the first 57 laps and Eckes leading the final 43.
Eckes finished 25 points ahead of Self in the final ARCA Menards Series championship standings, with fourth-place finisher Bret Holmes (No. 23 Holmes II Excavation Chevrolet) third in the final standings 165 points behind. Fifth-place finisher Travis Braden (No. 27 MatrixCare/Consonus Health Care/Liberty Village Ford) was fourth in the final standings and ninth-place finisher Joe Graf, Jr. (No. 77 EAT SLEEP RACE Chevrolet) rounded out the top five.
The ARCA Menards Series racing season is now complete, with the next event on the calendar the annual Championship Awards Banquet held at the Indiana State Convention Center in downtown Indianapolis, in conjunction with the annual Performance Racing Industry Trade Show, set for Saturday December 14.
Tags: ARCA Racing Series Christian Eckes