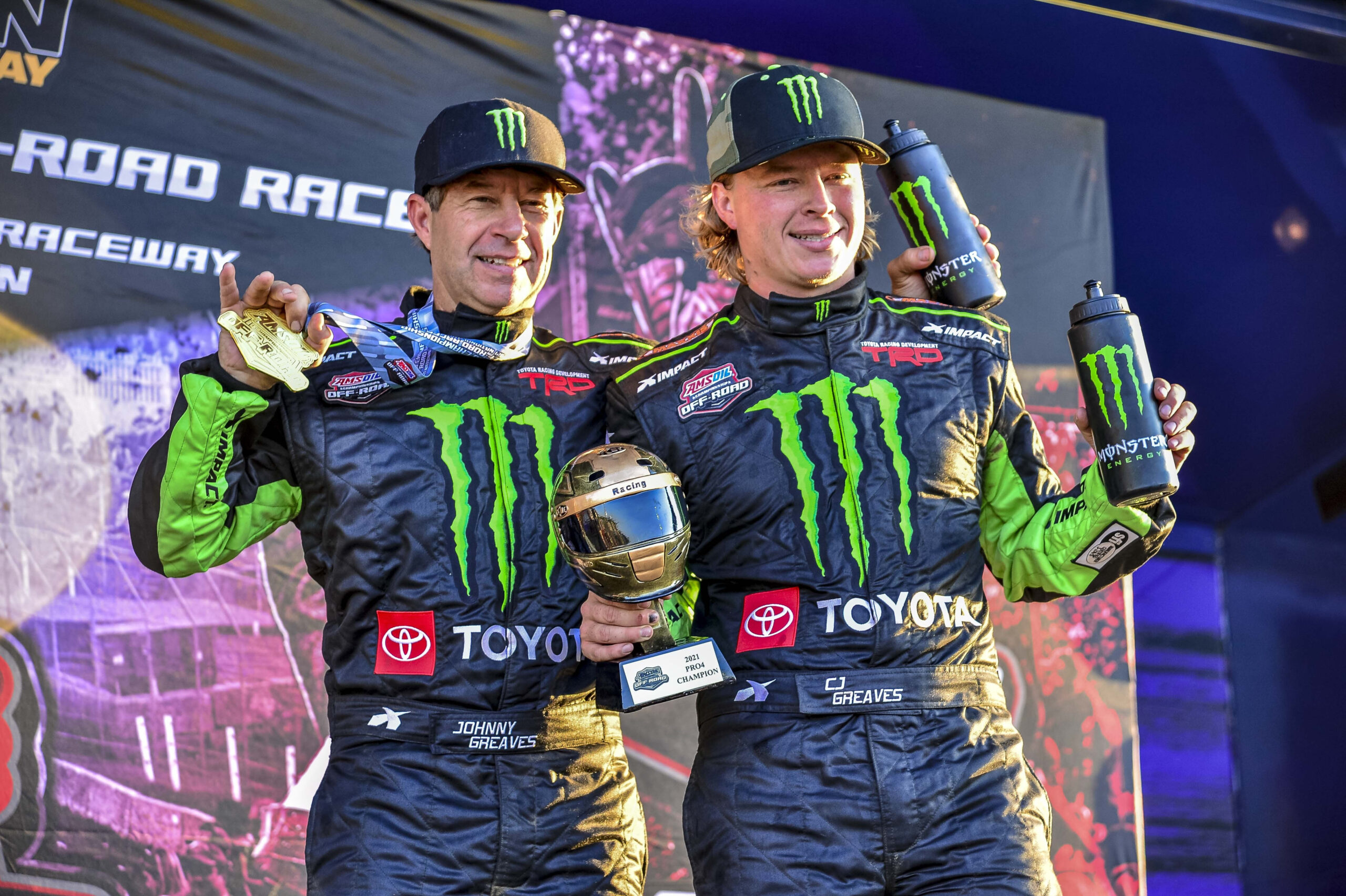 Going into the World Championship Off-Road Races at Crandon International Raceway, it was already a given that a Monster Energy athlete would take home the 2021 Championship Off-Road Pro 4 title, as CJ Greaves and Kyle LeDuc were the only two racers with a mathematical shot at the crown on Saturday. The bigger question was if Monster’s three-truck lineup of LeDuc, Greaves, and Johnny Greaves could complete a sweep of every Pro 4 race this year.

And complete it they did. Johnny Greaves put on a masterclass all weekend long, launching to a commanding lead in Saturday’s season finale to make it 11 for 11 for the Monster squad in COR Pro 4 events. CJ Greaves drove a steady race to finish sixth and lock up the season-long championship And if all that wasn’t enough, Johnny Greaves swept the weekend for Pro 4s on Sunday with Monster’s third straight triumph in the World Championship race.

After securing his 100th career Pro 4 victory earlier this season, Johnny Greaves had back-to-back near misses at Bark River for win number 101, leading both of those races up to the halfway point before running into trouble. There was no such adversity at Crandon, where he ran away with the lead early and withstood every challenge thrown his way in the second half of the race. Defending class champion LeDuc put himself into the mix for the win, and a shot at reclaiming in the points lead, but he would have to pull off early with rear-end damage. That opened the door for CJ Greaves to count off laps and cruise to the championship in an easy sixth place, going with his second place finishes in both the Pro Stock SXS race and championship from earlier in the day; he’d do the same in the Pro Stock World Championship race the next day.

Sunday’s Pro 4 World Championship race was more of the same for Johnny Greaves, who kicked off the morning with his fifth career victory in that event, and first since 2012. The win was the third in a row for the Monster team, as CJ Greaves took the victory in 2019 and LeDuc won last year. Finally, to cap off the weekend, Johnny Greaves scored a second place finish in the Crandon World Cup as the top Pro 4 finisher in a mixed class field. Both Johnny and CJ Greaves had been weaving their way through the Pro 2s into the closing laps of the race, before CJ would have to pull off just a lap shy of the finish with mechanical issues.

With the Championship Off-Road season complete, Johnny and CJ Greaves will focus on promoting Chaos at the Creek, the final SXS Sports King of the Elements presented by Monster Energy event of the year, at 141 Speedway on September 17-18. LeDuc, meanwhile, will focus on completing the Extreme E season with Chip Ganassi Racing.

Based in Corona, California, Monster Energy is the leading marketer of energy drinks and alternative beverages. Refusing to acknowledge the traditional, Monster Energy supports the scene and sport. Whether motocross, off-road, NASCAR, MMA, BMX, surf, snowboard, ski, skateboard, or the rock and roll lifestyle, Monster Energy is a brand that believes in authenticity and the core of what its sports, athletes and musicians represent. More than a drink, it’s the way of life lived by athletes, sports, bands, believers and fans. See more about Monster Energy including all of its drinks at www.monsterenergy.com.