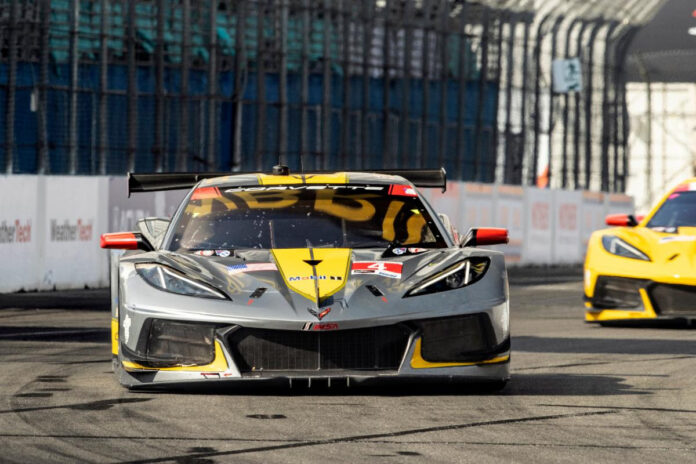 Milner passed No. 3 Corvette Racing teammate Jordan Taylor near the 50-minute mark, and Tandy drove a traffic-filled final stint as the Corvette Racing program won for the eighth time at the southern California street event. It’s the second street circuit win of the year for the Milner/Tandy duo, which also won a non-points race in June at Detroit’s Belle Isle circuit.

Milner won for the fourth time his career at Long Beach while Tandy took his second victory there.

Tandy took a 0.75-second victory over Antonio Garcia, Taylor’s teammate in the No. 3 Mobil 1/SiriusXM Corvette C8.R. The runner-up result did move Garcia and Taylor closer to their second straight GTLM Drivers Championship and a repeat Manufacturers crowd for Chevrolet.

As is typically the case at Long Beach, traffic played a huge role throughout the 100-minute sprint. Taylor began on pole position with Milner never more than two seconds behind. The ebb and flow of being passed by faster prototypes but passing slower GT Daytona (GTD) cars caused the gap between the two C8.Rs to fluctuate throughout.

The winning move came at the race’s halfway point as Taylor was balked by a GTD car, which allowed Milner to find some extra momentum and get alongside his teammate just before the short backstretch. The two Corvettes ran in that order before Taylor made the No. 3 Corvette’s only stop of the race with 41 minutes to go. Milner came in a lap later for the switch-over to Tandy, who rejoined the race in the lead and clear of Garcia by about two seconds.

As was the case in the first part of the race, traffic made Tandy’s lead grow and shrink over the course of a lap. But neither Corvette driver put a foot wrong for the final stint.

Corvette Racing’s next event is the Michelin GT Challenge at Virginia International Raceway on Oct. 8-9.

TOMMY MILNER, NO. 4 MOBIL 1/SiriusXM CHEVROLET CORVETTE C8.R – GTLM WINNER:
WE DIDN’T GET A GOOD LOOK AT THE PASS. TELL US WHAT HAPPENED. “The pass was done in Turn Six. I did a 360 and then a kick-flip afterward… Nah, lap traffic is always such a huge part of this race. When you have two cars that are so close and so competitive here together, trying to find an opportunity to pass on the racetrack is difficult. My plan was to stick with Jordan as best I could and take any opportunity that arose in traffic. That’s what happened at Turn Six. Because the GTD cars have ABS, they can brake later than we can. Jordan went for a move on the inside of that corner and it didn’t quite stick. His exit was compromised and I was able to get outside of him on the entry and that’s the preferred line there. At times it’s frustrating being stuck behind somebody. I’ve raced here for a long time and it’s happened to me. Just using that experience worked out for us. The pit stop was massively important here. It’s always limited by the driver change and four tires. That was the case again here, and everything lined up right. Nick did a great job. You have to make good decisions in traffic always. One bad decision can mean seconds of lap time and it can mean losing a position. He did an awesome job of managing traffic well and bringing our Corvette home.”

RACING HARD AGAINST TEAMMATES: “It’s the age-old rule in racing: you can’t hit your teammate. That’s kind of the rule we live by at Corvette Racing, but we are allowed to race. We can try to pass each other on the racetrack – even without traffic – if the opportunity arises. Because the cars are so close and it’s the same equipment, we know exactly where they are strong and where we are strong. We can look at the same video and data. To find a big difference on the track in pure pace is pretty hard to do. In those situations, the traffic usually affords you the opportunity to make a pass that can be clean. I really only had the one opportunity and thankfully I was close enough to take advantage of that.”

WINNING AT LONG BEACH: “The atmosphere here at Long Beach is fantastic with the crowd and energy that they bring. Not that we haven’t had fans for a year-and-a-half now, but this was the first time I really felt the energy of the fans. You miss it in some ways. Before the start of the race, there was so many fans in the stands. It’s one of the things that you get accustomed to after a long time. Now that we haven’t had it for a long time, to feel it again here at Long Beach is fantastic. I’m not sure that has any impact when you’re in the car, but it makes for a fun event for them and us as drivers and as a team.”

RACING AGAINST GTD CARS: “That class has gotten super competitive the last couple of years. They’re doing the same job we are. For us at Corvette Racing, we don’t look at that class as something easy in any way. If anything it’s more difficult. For those guys to get wins in that class is very difficult. Whoever races in that class next year is going to have a hard time.”

NICK TANDY, NO. 4 MOBIL 1/SiriusXM CHEVROLET CORVETTE C8.R: “I’m really happy to win again at Long Beach and with Tommy. My job was pretty simple in the end. The stint Tommy did running up to the pitstop was crucial. Getting past the 3 car enabled us to deny them track position before the stop was a good call. Once we came back out in front, we knew the car coming out in front after the stop cycle would be difficult to beat. It worked out perfectly. The team did a flawless stop, and that’s one of the key things at Long Beach. It’s often that we are fuel-defined by the pitstop time. Here we don’t need to take a full tank, so often it’s down to the driver change time and tire change. Pretty much everything synced together. I got my belts tight and off we went.”

WINNING AT LONG BEACH: “I’d reiterate what Tommy said. It’s awesome to be back at this event. I think I’ve seen more people here this weekend than ever. Anytime you get to come race at Long Beach, it’s a classic event. It’s always a favorite to come to. The races are frenetic. Getting a trophy from the Long Beach Grand Prix is always a big one.”

LONG BEACH NEXT YEAR: “If Corvette Racing goes into GTD next year, we’ve been in the paddock with these teams and drivers. You can see the level that the category is top professional racing. We always look to have great racing. We always know that the best wins are when you face the toughest competition. This is what Corvette Racing wants to do. We want to race the best competition possible no matter where that may be. It’s great that we have all these different types of cars and classes within sports car racing that these teams and manufacturers can go racing in.”

ANTONIO GARCIA, NO. 3 MOBIL 1/SiriusXM CHEVROLET CORVETTE C8.R – SECOND IN GTLM: “Obviously you always want to win. The pit cycle didn’t go our way and we lost track position right before the stop. From that point on, we didn’t have the advantage of over-cutting so we had to pit early. The car was really good. Even if I had a two- or three-second deficit initially, I was able to catch back up again to Nick. As we saw, it’s almost impossible to pass unless you hit traffic the right way. That’s the main thing. I stayed where I was and wait for a mistake and a little traffic. On a street circuit, you can’t risk it like if we were fighting another manufacturer. You want to win but you always know that is your teammate, too. It was fun to go flat-out around this track, and I could tell Nick was trying hard, too.”

JORDAN TAYLOR, NO. 3 MOBIL 1/SiriusXM CHEVROLET CORVETTE C8.R – SECOND IN GTLM: “It wasn’t a bad race and to finish second. It definitely was tricky with traffic. Some guys did not want to lift or let anyone go, which was frustrating but it’s part of the race. Everyone has to deal with it. So another good day for Corvette Racing with a 1-2 finish. For us in the 3 car, I think we’re pretty close to the championship. It opens things up to take more risks the next races, which will be fun.”