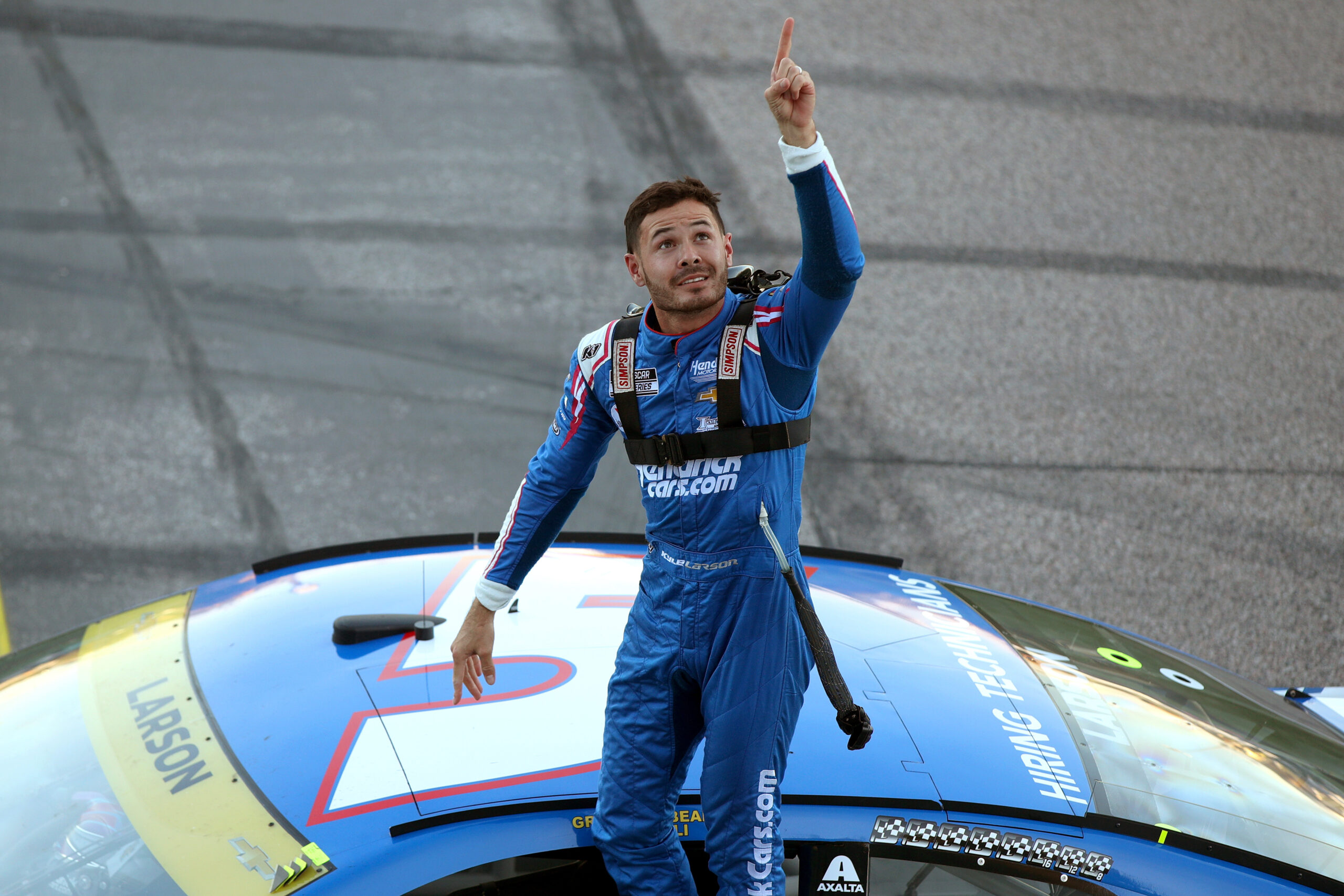 Kyle Larson did the heavy-lifting on Sunday, leading nine different times for a race-high 130 laps, ultimately crossing the finish line a hefty 3.619-seconds ahead of the field to earn a NASCAR Cup Series-best ninth win of the season (15th of his career) in the Hollywood Casino 400 at Kansas Speedway.

It is the third consecutive race win for the 29-year old Californian and the second time this season he’s won three in a row. The last time a driver won three straight races twice in a season was 1987 when the late, seven-time champion Dale Earnhardt accomplished the feat.

As important as the milestone and positive Playoff outcome to Larson’s Hendrick Motorsports team, however, Sunday’s victory also comes 17 years to the day that the storied organization lost 10 people – including Rick Hendrick’s son Ricky and brother John – in a plane crash near Martinsville, Virginia.

“I want to dedicate this win to Rick and Linda (Hendrick),’’ Larson said. “I didn’t ever get to meet Ricky or the other men and women who lost their lives that day, but I felt the importance of this race, no doubt.

“It’s crazy how it kind of all worked out there for me to win. I know they were all looking down and helping out there with all the re-starts and stuff after getting into the wall. Again, thank you to Rick Hendrick. I know this means a lot to you and I’m glad I could get it done.‘’

There was a lot to be proud of. Larson has four race victories and a runner-up finish in seven Playoff races this season as the series holds its penultimate Playoff race next week at Martinsville Speedway. The outcome will determine which four of the current eight Playoff-eligible drivers will advance to the Nov. 7 season finale able to contend for the NASCAR Cup Series Championship.

Larson’s Hendrick teammate Chase Elliott was runner-up Sunday, nursing a car with some damage after he hit the wall pushing for a win in the final laps. Kevin Harvick and Kurt Busch, who are not Playoff-eligible and Joe Gibbs Racing driver Denny Hamlin, a Playoff driver, rounded out the Top five.

“Once I hit the wall, I really didn’t have a choice, I hurt it pretty bad, but I’m really proud of the effort,’’ Elliott said. “Our NAPA team did a great job today and I felt like we had something for Kyle [Larson] there, just got the wall off of Turn 2. Just so hard to get up to him. Every few feet you get closer, the harder it gets.’’

At least six of the eight Playoff drivers – including Larson – endured some competitive drama during the competitive afternoon that saw 23 lead changes.

Notable, was the early exit for Team Penske’s Ryan Blaney. He entered Kansas ranked second in the standings. But his No. 12 Ford was hit by Dillon and sent into the wall as the two ran among the frontrunners with only 44 laps remaining. Blaney’s car was unable to continue and he ended up 37th on the afternoon, dropping from second to fifth in the Playoff standings, one point behind Kyle Busch, who finished 28th.

“We got run into from two lanes below me,’’ a clearly frustrated Blaney said. “I have no idea (why). Obviously it hurts. Finishing 37th is not prime. We didn’t have a great day but we had did a good job of fighting back and getting back into the Top 10 but then just got wiped out when we had plenty of room.

“That sucks. It was very unfortunate.’’

Strong winds and season-pressures made for action-packed runs all afternoon. Some cars scraped the wall and could continue like Larson and Elliott, but others, such as Playoff drivers Busch, Brad Keselowski, who finished 17th, and Truex had to pit for repairs and rally back into contention or points-saving modes.

Heading into Martinsville, Larson has the only automatic entry into the Championship 4 with his wins last week at Texas and this week at Kansas. Elliott is now second in the standings with a two-point edge over Hamlin.

Fourth place, Joe Gibbs Racing driver Busch, has that one-point advantage over Blaney and a three-point edge on his JGR teammate Truex. Penske Racing’s Keselowski is six points behind Busch and his Penske teammate Logano goes into Martinsville 26 points below the cutoff line.

The series moves to the Martinsville Speedway next weekend for Sunday’s Xfinity 500 (2 p.m. ET, NBC, MRN, SiriusXM NASCAR Radio). The top-four ranked drivers then move on to the Nov. 7 NASCAR Cup Series Championship at Phoenix Raceway to decide who will hoist the hardware.