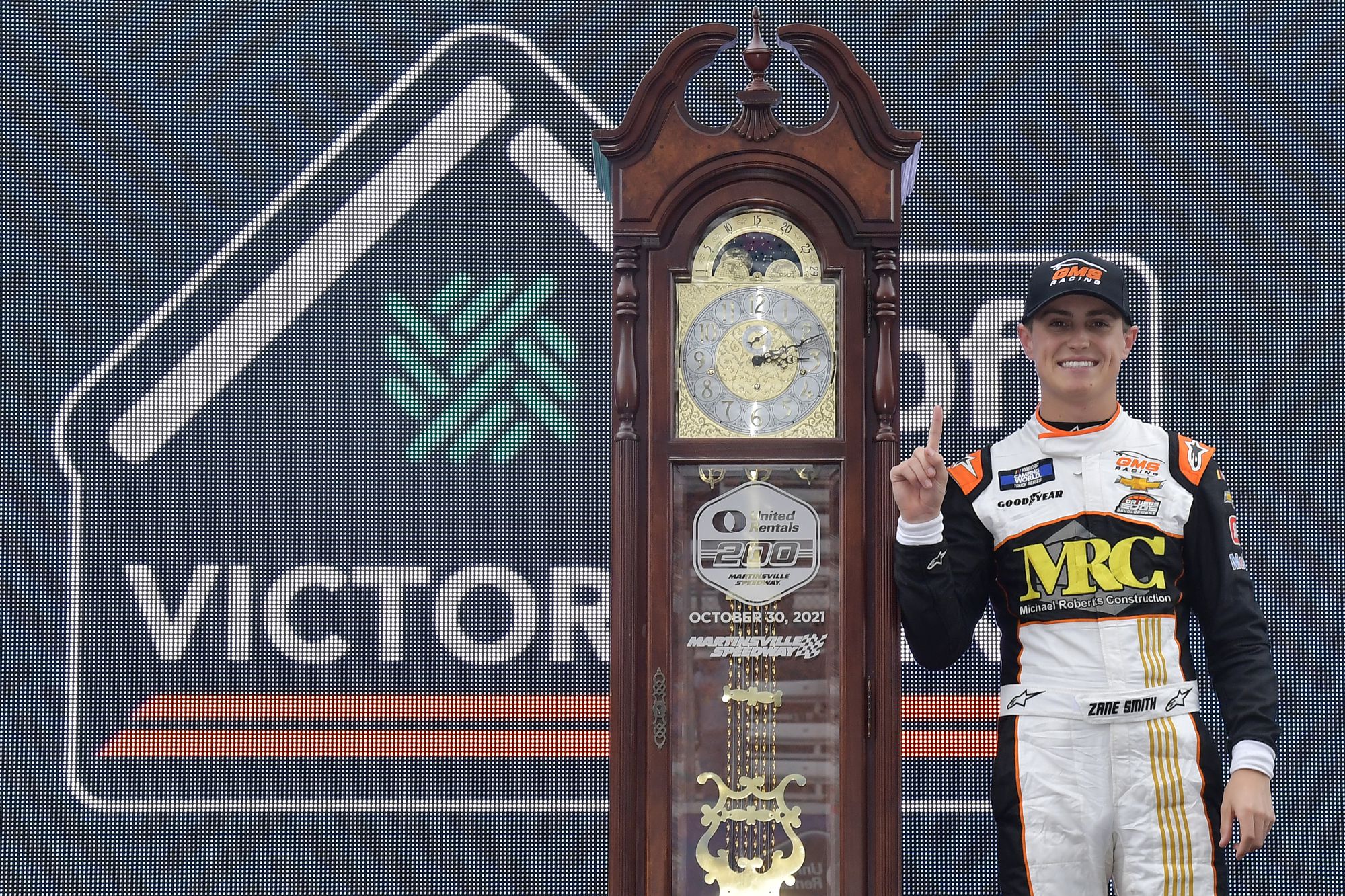 On a track strewn with spinning trucks and broken hearts, Zane Smith catapulted into the Championship 4 with a thrilling overtime victory in Saturday’s United Rentals 200 at Martinsville Speedway.

MARTINSVILLE, Va. – On a track strewn with spinning trucks and broken hearts, Zane Smith catapulted into the Championship 4 with a thrilling overtime victory in Saturday’s United Rentals 200 at Martinsville Speedway.

In a no-holds-barred race that featured 14 cautions for 89 laps, Smith won under yellow after he, Stewart Friesen and Todd Gilliland raced three-wide—yes, three-wide at Martinsville—off Turn 4 on the first lap of overtime.

Contact from Friesen’s Toyota sent Gilliland’s Ford spinning across the start/finish line to start the final lap. As Friesen moved down the track to contest the lead with Smith, contact between the two trucks spun Friesen’s Silverado into the Turn 1 wall.

With the track blocked by spinning trucks behind Smith, NASCAR called the final caution, and Smith took the checkered flag under yellow.

Smith’s victory—his first at Martinsville, his first of the season and the third of his career—was heartbreak for his GMS Racing teammate, Sheldon Creed, the reigning series champion. Late in the race, Creed slapped the outside wall in an incident involving Matt Crafton and Grant Enfinger, finished ninth and failed to make the Championship 4 by four points.

Smith hasn’t been told whether he’ll return to GMS Racing next year, a point he made when he climbed from his No. 21 Chevrolet.

Smith added a promise for next Friday’s championship race at Phoenix.

“I’ll do whatever it takes to win the damn thing,” he said.

Regular Season Champion John Hunter Nemechek survived a hard wreck on lap 130 after Austin Wayne Self hooked him on the backstretch and turned the No. 4 Toyota hard into the outside wall. Nemechek and Crafton made the final four by four points, joining Smith and Ben Rhodes in next Friday’s championship race.

“He shouldn’t be out here if he’s just going to hook someone in the right rear and turn them in the fence,” said Nemechek, who had bumped Self’s Chevrolet in Turn 1 moments before the wreck.

“NASCAR should definitely look at that. It’s Playoff contention. You’ve got to have respect and he doesn’t. It is what it is. Hopefully we make it to the final four and we definitely will have something for them in Phoenix…

“My motto coming into this was ‘survive and advance.’ We didn’t survive, but we advanced.”

Knocked out of the Playoffs with Creed were Friesen, who finished 17th and Sunoco rookies Chandler Smith and Carson Hocevar.

“On one of the last restarts, he just drove into the 98 (Enfinger), his own teammate, and I ended up getting swept into the fence because of it,” Creed said. “Went back to 23rd and drove back up and finished ninth, I guess. It’s just frustrating.”

In an earlier incident on Lap 185, Enfinger had turned Crafton in Turn 4, but Crafton escaped damaged with a deft move after a 360-degree spin and salvaged a fifth-place finish.

Gilliland led a race-high 133 of 204 laps but couldn’t survive the final restart when Smith used his bumper to get beneath Gilliland’s Ford in the first corner.

In the wild finish, Austin Hill was credited with second, followed by Tanner Gray, Chandler Smith and Crafton.