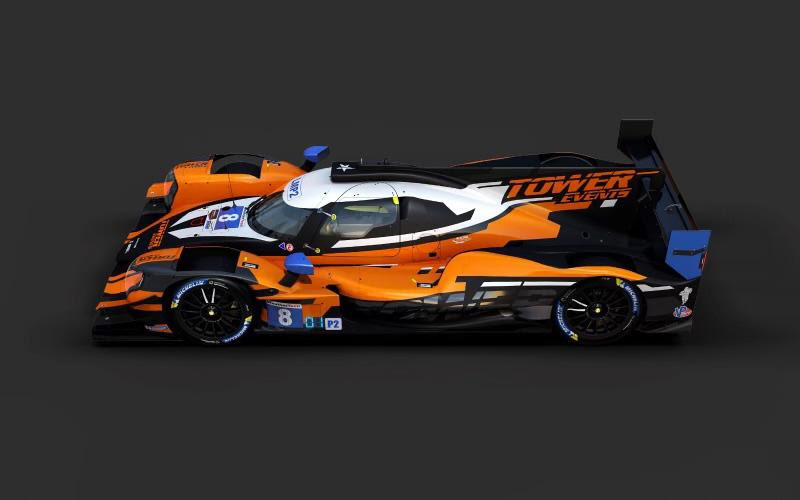 Toronto, Ontario. (January 7, 2022) – The 2022 IMSA WeatherTech SportsCar Championship season begins this month at Daytona International Speedway and Tower Motorsport will return to the series for another full season with the No. 8 Oreca in the LMP2 class. Team principal John Farano and 2021 European Le Mans Series (ELMS) Champion Louis Delétraz will run the seven-race championship and be joined by 2021 ELMS Champion Rui Andrade for the four endurance races. Ferdinand Habsburg, 2021 24 Hours of Le Mans winner, will act as the team’s fourth driver for the Rolex 24 At Daytona.

Tower Motorsports concluded the 2021 IMSA WeatherTech SportsCar Championship on the top step of the podium, claiming victory at Petit Le Mans, defending the team’s win at the same event in 2020. The team finished third in the LMP2 championship standings, placing in the top three for six of the seven races.

The 2022 season will mark Tower Motorsport’s third year in the IMSA WeatherTech SportsCar Championship. Sponsored primarily by Tower Events and Tower Scaffold Services, the No. 8 Oreca will again sport its signature orange and white colors, with a black base to replace the previous year’s purple livery. With three reigning champions, Tower Motorsport’s stout lineup will prove to be a strong entry in the packed Rolex 24 field.

“I am very excited to be racing alongside Louis for the full 2022 IMSA WeatherTech SportsCar Championship and thrilled to have Rui join us for the full Michelin Endurance Cup Championship, and having Ferdinand anchoring the team for the 24,” said Farano. “I have already had the pleasure of testing at Daytona with these amazing drivers who immediately put their speed and talents on display. I am very much looking forward to another great season with Rick Capone (Capone Motorsports) leading our technical crew (Erwan, Richie, Martin, Damien, Daniel, Alain, JJ, Jan, and John) and our amazing engineering group led by Matthieu Leroy and supported by Viktor and Townsend whom I am sure will continue to field one of the best performing cars on the grid.”

Having raced primarily in single-seaters, 24-year-old Louis Delétraz earned a name for himself, climbing up to compete in Formula 2 and spending two years as a Formula 1 Reserve Driver with Haas F1 Team. In 2015, he became the Formula Renault 2.0 Northern European Cup champion, and in 2021, he earned top honors again with Team WRT in the European Le Mans Series.

“I’m delighted to join Tower Motorsport for the full 2022 IMSA WeatherTech SportsCar Championship,” said Delétraz. Together with John, Rui and Ferdinand I think we have a super competitive lineup. The 2022 preparation has already started with some testing at Daytona, we all have the same goals and motivation of having a successful 2022 season. The off-season preparation has already started to be ready for Rolex 24 At Daytona at the end of January where we aim to start strong!”
﻿
Joining the full-season duo for the Michelin Endurance Cup, the four-race championship within the seven-race full season championship will be Rui Andrade. The 2021 European Le Mans Series LMP2 Pro-AM champion began his racing career karting at age 12 and made his single-seater debut in 2018. The 2021 season marked his first-time racing in LMP2, claiming top honors in ELMS and third place in the Asian Le Mans Series championship.

“I’m extremely happy with the opportunity to join John, Louis, and Ferdinand in the Rolex 24 At Daytona,” said Andrade. “It’s one of the world’s most prestigious motor races and having spent most of my childhood in America, I feel very privileged to be able to return to do what I love the most. I know Tower is an incredible team and have already had the chance to test with them and get to meet everyone has only made me more excited with what’s to come.”

Rounding out the Tower Motorsport lineup for 2022, 24-year-old Ferdinand Habsburg will complete the team, racing as the fourth driver in the Rolex 24 At Daytona. Also with a background in single-seaters in Europe, Habsburg has had great success in sports car racing, winning the FIA World Endurance Championship LMP2 title, Rolex 24 Hours of Le Mans, and the Asian Le Mans Series title, all in 2021.

“Racing in America is something else,” said Habsburg. “I have raced all around the world, but nothing comes close to the atmosphere in Daytona on race day. It just drags you in and makes you want to go back again and again. I am really looking forward to sharing a car with my fellow Bullet Rui, REMUS Ambassador Louis, and Tower Motorsport stalwart John Farano. My goal is quite clear: I missed out on the watch in Le Mans so I will give my all to grab one in Daytona.”

The 2022 schedule will see the LMP2 class returning to the same courses as the previous season, starting with the Roar Before the 24 at Daytona International Speedway, January 21-23. Acting as the first official series-wide test of the new season, the Roar also hosts the qualifying session for the first race of the year, the Rolex 24 at Daytona. Dubbed a “qualifying race,” the Motul Pole Award will be a one-hour, forty-minute race that will be held on January 23 at 2:00 pm Eastern and will set the grid for the Rolex 24 the following week, beginning on January 29th at 1:40 pm eastern. For ticket information and TV and stream listings, visit imsa.com.