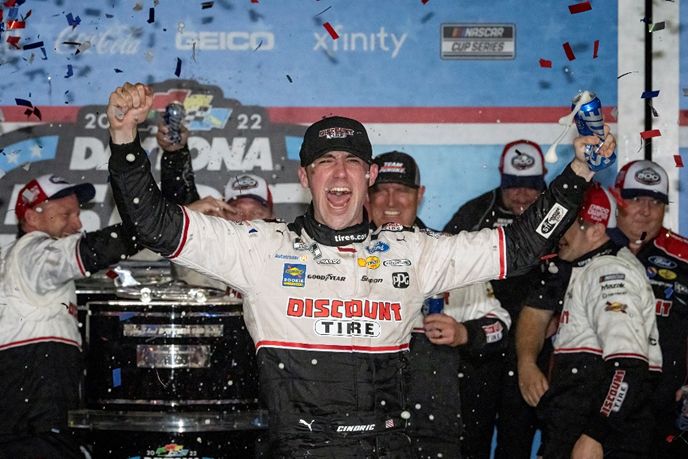 In a thrilling run to the finish in NASCAR’s new Next Gen race car at Daytona International Speedway, Cindric held off Wallace and Chase Briscoe (.091 seconds behind) to notch his first Cup victory in his eighth start in the series.

Cindric, who was +2500 to win the DAYTONA 500 on Draftkings, got the win in chamber-of-commerce weather with a sold-out crowd jamming the grandstands.

“Oh, my God—do you know what makes this even better? A packed house,” Cindric exulted after climbing from his car. “A packed house at the DAYTONA 500. “Oh, my God, I’ve got so many people to thank. First and foremost, Roger Penske. Happy Birthday!

“Everyone has worked so hard on this Next Gen car and through the whole process. I am so excited. This makes up for losing a championship in the last race I was in (2021 Xfinity Series season finale at Phoenix Raceway).

“I’m surrounded by great people, that’s all there is to it. I know there’s going to be highs and lows, being a rookie. I’m just grateful for the opportunity and excited to climb the mountain ahead of us on the No. 2 team. We’re in the Playoffs—that’s one box checked. My gosh, what an awesome group of fans; what an awesome race car. I’m just really thankful.”

A three-car wreck in Turn 4 on Lap 195 of a scheduled 200 wiped out the No. 47 Chevrolet of Ricky Stenhouse Jr., who was leading for a restart on that same lap but was turned by a push from Brad Keselowski. The incident forced the race to overtime, requiring one extra lap for Cindric to claim victory.

Cindric was the leader when the race restarted on Lap 200, and at the end of a wild two-lap scramble—after blocking a strong run from Team Penske teammate Ryan Blaney—he arrived at the finish line roughly three feet ahead of Wallace, who was runner-up in the Great American Race for the second time.

“I thought our Toyota teammates did good work until they got picked off 1, 2, 3 throughout the race, so we just had to survive,” said Wallace, who finished .260 seconds behind race winner Austin Dillon in the 2018 Daytona 500.

“Great Speedweeks, though. We’ll come home second. I’m going to be pissed off about this one for a while. I was happy on the first second place we got a couple years ago. This one sucks when you’re that close, but all-in-all, happy for our team, happy for our partners, and on to California.”

Less than three laps from the end of the first stage, a push from Keselowski turned the No. 21 Wood Brothers Ford of Harrison Burton sideways at the head of the outside lane. Burton’s Mustang nosed down the track into the No. 24 Chevrolet of William Byron, whose car slammed nose-first into the inside wall on the backstretch.

Kyle Busch spun sideways during the ensuing eight-car wreck. Denny Hamlin’s Toyota sustained terminal suspension damage, eliminating the field’s only multiple winner of the DAYTONA 500. The No. 1 Chevrolet of Ross Chastain was also knocked out of the race.

After the impact with Byron’s car and a jolt from the Toyota of Christopher Bell, Burton’s Ford turned upside down and landed on top of the Chevrolet of Alex Bowman, who had started the race on the outside of the front row. The impact righted Burton’s car, which a wrecker towed to the garage. Bowman lost four laps as his crew tried to return the No. 48 Camaro to raceable condition.

“I’m fine—I’ve hit a lot harder before, that’s for sure,” Burton said after a trip to the infield care center. “It’s just unfortunate. I hate it for the Wood Brothers group. They brought a really fast Ford Mustang down here and ended up on our lid, so that’s never good…

“I don’t know, I just got pushed and didn’t take it the right way—the car didn’t take it the right way or got pushed in the wrong spot. I’m not sure. I couldn’t really tell. I was looking out front to see what I had to do next to side draft the next guy that was on me, so just a bummer. I don’t really know what we could have done different, but we’ll move on and get better from it.”

From Hamlin’s standpoint, it was clear what happened.

“The 6 (Keselowski) was pushing the 21 (Burton) and you could see the 21 was kind of getting out of control there,” said Hamlin, who failed to finish a DAYTONA 500 for the first time in 17 starts and lost his chance for a fourth visit to Victory Lane. “So you know the mind-set was that you’ve got to back off, but I think the 6 was just insistent on pushing him at all costs and eventually turned the 21 around.

“Tough, you know, considering it was just for the stage. We were kind of boxed in there where I noticed that something was going to happen, but I was boxed in, I was behind a teammate (Kyle Busch), and I wanted to try to help. Again, just too aggressive pushing right there when they weren’t lined up and in control.”

Truex won the first stage under caution and then claimed victory in the second stage, which ran under green-flag conditions from the restart on Lap 72 to the conclusion on Lap 130. Truex came from third to first on the final lap to grab the stage win.

Keselowski, however, was first off pit road under caution for the stage break and led the field to green for a restart on Lap 138. Keselowski held the top spot until Tyler Reddick’s Chevrolet broke loose in Turn 4 on Lap 151 and started a wreck that damaged the contending cars of Truex, Joey Logano and Kurt Busch.

Fans can stay connected with Daytona International Speedway on Twitter, Facebook and Instagram, as well as the all-new NASCAR Tracks App, for the latest speedway news.

About Daytona International Speedway
Daytona International Speedway is a state-of-the-art motorsports facility and was awarded the SportsBusiness Journal’s prestigious Sports Business Award for Sports Facility of the Year in 2016. Daytona International Speedway is the home of The Great American Race – the DAYTONA 500. Though the season-opening NASCAR Cup Series event garners most of the attention – as well as the largest audience in motorsports – the approximately 500-acre motorsports complex, also known as the World Center of Racing, boasts the most diverse schedule of racing on the globe. In addition to at least nine major event weekends, the Speedway grounds are also used extensively for events that include concerts, civic and social gatherings, car shows, photo shoots, production vehicle testing and police motorcycle training. The iconic venue will be the site of a host of motorsports events early in 2022, beginning with AHRMA Classic Motofest and the Rolex 24 At DAYTONA in January, and the 64th DAYTONA 500, which will debut the first points race for NASCAR’s ‘Next Gen’ car as part of Speedweeks Presented by AdventHealth in February. The tradition-rich 81st Annual Bike Week At DAYTONA returns in March, featuring DAYTONA Supercross and the DAYTONA 200, and in May with the Heroes Honor Festival. Later in the summer during Independence Day weekend, the track, in association with Torneos, will host Soccer Fest before the NASCAR Cup Series returns for the final race of the regular season with the Coke Zero Sugar 400 on Aug. 27.