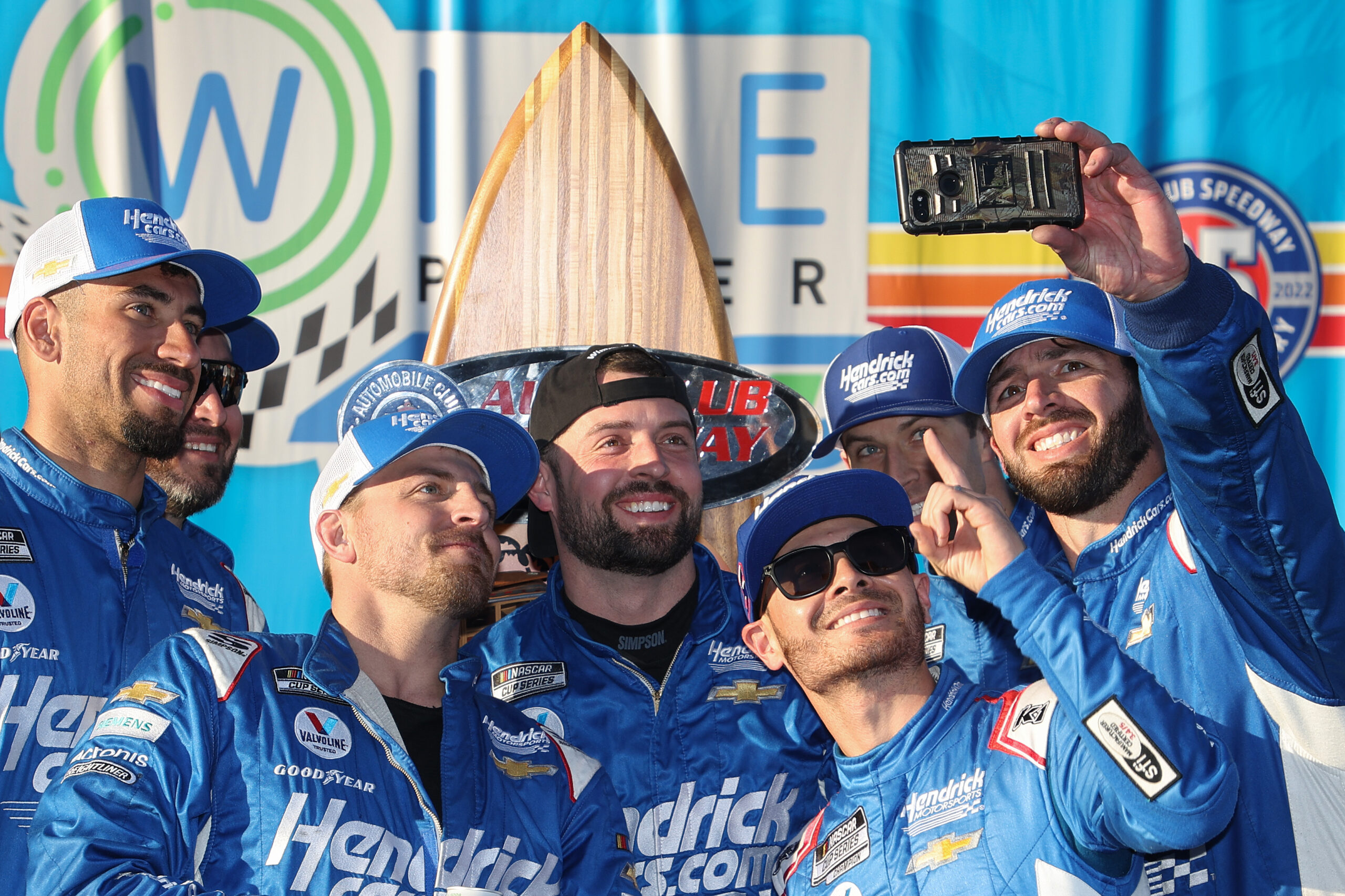 But in the end, the driver of the No. 5 Hendrick Motorsports Chevrolet held off a charging Austin Dillon by .195 seconds at Auto Club Speedway in Fontana, Calif., to notch his first victory of the season, his second at the 2-mile track and the 17th of his career.

In a race that featured 12 cautions for 59 laps, Larson, who started from the rear of the field because of unapproved adjustments to his Camaro, took the lead from Joey Logano on Lap 167 of 200 and held it for 27 of the final 34 circuits on the way to the victory.

That was after the dominant car of Tyler Reddick suffered a flat left rear tire while leading on Lap 152, and in the aftermath of that incident was collected by the sliding car of William Byron.

Reddick had led 90 laps to that point—17 more than in his first 75 Cup starts combined—and had won the first and second stages in convincing fashion.

Larson, however, outlasted arguably stronger cars and was in position to win at the end of the race.

“It’s always fun to win here in the home state,” said the Elk Grove, Calif., native Kyle Larson. “There were definitely some guys that were quicker than us, but they had their misfortunes.

“Just kept our heads in it all day—long race. Restarts were crazy. The whole runs were crazy. So definitely wild, but cool to get a win here in California and hope we get on a little streak.”

Larson’s victory came at the expense of teammate Chase Elliott, who fell two laps down after scraping the wall on Lap 33 and spinning off Turn 2 five laps later.

As the beneficiary under two cautions, Elliott regained the lead lap, drove through the field and was battling Larson and Logano for the lead when Larson shot up the track and pinched Elliott’s Chevrolet into the outside wall. Larson said on his radio that he didn’t know Elliott was there.

It was Elliott who spun on Lap 192 to cause the final caution and set up a dramatic four-lap sprint to the finish that saw Trackhouse Racing’s Daniel Suarez briefly wrestle the lead from Larson, thanks to a push from Petty GMS Motorsport’s Erik Jones. But Larson regained the lead off Turn 4 with just over two laps left and held it the rest of the way.

In a testament to the relative parity achieved by NASCAR’s new Next Gen race car—admittedly with a small sample size so far—nine different Cup organizations finished in the top 10 at Fontana.

One of those was the Trackhouse Racing team of Suarez, who rolled home fourth behind the Chevrolets of Larson, Dillon and Jones.

“We’re going to win a few races very soon here,” Suarez said. “I just can’t thank everyone enough on my team. We had a fast car, but we went through a lot of adversity. We had a few issues. We hit the wall once. We had an issue with a diffuser. My pit crew, those guys are legends, it’s unbelievable.

“It’s the best pit crew I’ve ever had, and it’s a lot of fun to race like that. The Freeway Insurance Chevrolet, everyone that helps Trackhouse out, to be able to be here and perform this way… I can tell you that I’m going to work very, very hard to go to Victory Lane very, very soon here.”

Logano ran fifth, followed by Aric Almirola, Kevin Harvick and Kurt Busch (who started from the rear and served a pass-through penalty to start the race because of three inspection failures). Daniel Hemric and Ricky Stenhouse Jr. completed the top 10.

Larson, who won 10 races last year in his first season at Hendrick Motorsports, led four times for 28 laps, second only to Reddick’s 90. All told, there were 32 lead changes among nine drivers in an event in which radical shuffling of the running order was commonplace.

Located 50 miles east of Los Angeles in Fontana, Auto Club Speedway is California’s premier motorsports facility, hosting over 320 days of track activity each year including a NASCAR Cup Series weekend. The two-mile D-shaped oval is one of the fastest tracks on the NASCAR circuit. The Speedway is also home to numerous movie, television and commercial productions, photo shoots, new car testing, club racing and a variety of racing schools. For more information on events at Auto Club Speedway, call 1-800-944-RACE (7223), visit www.AutoClubSpeedway.com or download the new NASCAR Tracks App.

Wise Power is a renewable energy company that specializes in clean energy solutions. Our solar PV, energy storage, and Electric Vehicle (EV) charging systems are designed to meet the customer’s needs for each project. We are proud to announce our national EV charging station network and mobile application at wise-ev.com. For more information, visit www.getwisepower.com