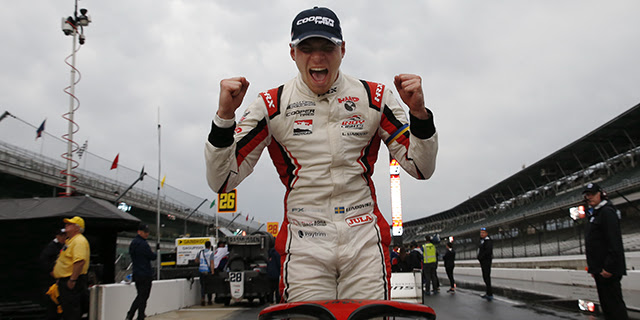 INDIANAPOLIS (Saturday, May 14, 2022) – Linus Lundqvist leaned down and kissed the side of his car, expressing gratitude and jubilation after conquering a more than six-hour day at the Indianapolis Motor Speedway road course Saturday.

The Swedish driver found redemption after a mistake cost him a potential victory Friday by mastering the 14-turn, 2.439-mile track in dry and wet conditions to claim his second Indy Lights Presented by Cooper Tires win of the year, his second career win at IMS and fifth overall victory.

The day was split in two for the 14-car field. After the first 12 laps around a dry track surface, lightning struck in the area, causing a red flag, and rain followed. That forced the race to be delayed until after the end of the GMR Grand Prix NTT INDYCAR SERIES race.

More than five and a half hours later, after more rain and the entire NTT INDYCAR SERIES program, drivers returned to their cars to face a wet surface for the remaining laps.

Before the rain fell, Lundqvist had a 2.7-second lead over Matthew Brabham, who went from fourth to second with a four-wide pass into Turn 1 on the initial start in the No. 83 Andretti Autosport entry. When the race resumed hours later, Lundqvist again mastered the start, pulling ahead by two car lengths while Brabham, Rasmussen, Danial Frost and Benjamin Pedersen again went four-wide down the front stretch, playing chicken to see who would brake last before Turn 1. Rasmussen won the battle this time, taking second.

Brabham’s shot of holding on to a podium vanished seconds later when he ran off course, giving up several positions to Frost, Hunter McElrea and Pedersen. And while they argued over who would secure the final podium spot, Robb spoiled their battle in the closing laps. As one of the fastest cars on track, he worked his way from 13th to third by the checkered flag.

Lundqvist was flawless in the final 20 laps, gaining two car lengths on every restart and never missing his mark. However, Rasmussen tried to give him a scare. With eight laps to go, Rasmussen was laying down laps a half-second quicker than Lundqvist, who was five seconds ahead.

Math says Rasmussen could have caught Lundqvist. But Rasmussen lost that chance with a slip in Turn 12 that allowed Lundqvist to pull ahead by another two seconds.

“I was pushing it to the edge and over the edge,” Rasmussen said. “I made a mistake in Turn 12. I’m a little disappointed in myself. I think it should have been one position better.”

With 10 races remaining this year for the Indy Lights, Lundqvist exits the Indy doubleheader weekend with an extended point lead for his championship quest.

Indy Lights Presented by Cooper Tires continues its 2022 season in June for the second doubleheader weekend of the year. The field will join the NTT INDYCAR SERIES in Detroit at The Raceway at Belle Isle Park, June 4-5. Live coverage will be provided by Peacock Premium and the INDYCAR Radio Network.