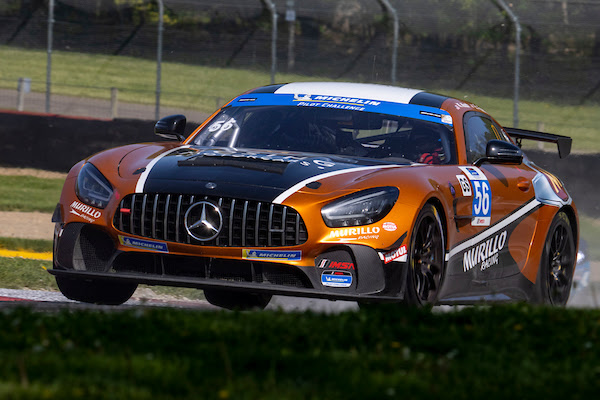 The overall win was the first for the Mercedes-AMG GT4 in IMSA Michelin Pilot Challenge competition since last July at Lime Rock Park when Foss and regular No. 56 teammate and co-driver Jeff Mosing co-drove to the victory.

Koch is in his second race substitute driving in the No. 56 after Mosing – Brent Mosing’s younger brother – suffered a broken and bruised rib in a boating accident last month. Foss and Jeff Mosing decided on Koch to fill in, and the decision has quickly paid off.

Koch won the pole in his first GS race with Murillo two weeks ago at WeatherTech Raceway Laguna Seca and repeated the feat at Mid-Ohio with the top GS lap time in Friday’s qualifying session.

Koch took the lead at the start of today’s two-hour race and was followed by Murillo Racing’s third entry driven by Kenny Murillo. Murillo moved up to second from third on the grid in the No. 72 Murillo Racing Mercedes-AMG GT4 at the race start and ran in a close, one-two formation with Koch throughout their more than an hour-long driving stints.

Murillo led two race laps in the No. 72 when Koch and his team decided to pit two laps early when a vibration developed in the left front wheel on the No. 56. Foss took over, four fresh Michelin tires solved the vibration issue, and a fast pit stop returned the No. 65 to the race in the lead.

Christian Szymczak replaced Murillo in the No. 72 that rejoined the race in the lead pack and in a battle for second place with another competitor. A contact incident between the two resulted in the No. 72 spinning off course, but Szymczak quickly recovered and continued, eventually climbing back to a season-best fifth-place result at the checkered flag.

Meanwhile, Foss maintained the race lead while conserving fuel and trying to preserve the tires on the No. 56. A 12-second lead soon decreased to less than a second, but Foss held the competition off for an 0.699 of second margin of victory. The No. 56’s fuel warning light illuminated on the last lap of the race, but Foss saved enough fuel to make it to the end.

Brent Mosing survived a late challenge of his own to secure the first Bronze Cup win for himself, Probert and the No. 65 team. The victory gave the Mercedes-AMG GT4 a perfect four-for-four record this season in the new Bronze Cup class, which is a new championship within the overall GS schedule for Bronze-rated drivers that typically designates sportsman or “Am” competitors.

The first three Bronze Cup races of the season were won by Gary Ferrera and Kris Wilson in the No. 11 Capstone Motorsports Mercedes-AMG GT4. Wilson closed on the No. 65 in the final 15 minutes of Saturday’s race, but Mosing successfully defended the lead straight to the checkered flag.

For the second consecutive race, Murillo Racing was the only GS team to lead a race with two different cars. The No. 56 and No. 72 combined to lead all but two of today’s 75 race laps.

The race win unofficially moves the No. 56 Murillo Racing team and drivers to second place in the Michelin Pilot Challenge GS championship standings.

Stevan McAleer, who co-drives with Mike Skeen, starts on the outside of the front row after qualifying second Saturday in the No. 32 Team Korthoff Motorsports Mercedes-AMG GT3. Russell Ward takes the green flag in the No. 57 Winward Racing Mercedes-AMG GT3 from the inside of row three after a fifth-place qualifying run Saturday.

Eric Foss – No. 56 Murillo Racing Mercedes-AMG GT4: “First off, a huge thanks to Jeff Mosing for continuing this operation when he is not even able to drive. When he got injured, he asked who my first choice would be, and Kenton Koch immediately came up. He has been part of the Murillo family, racing in feeder series with us a few years ago, and I have known him and watched him flourish as a driver since he was 19 or so. Murillo Racing just nailed the setup on the cars this weekend. Having to pit early really put us on the back foot, but we had a great stop and kept the lead. I went into fuel saving mode and our Mercedes-AMG GT4 was so good on the tires this weekend. That was the difference in the end, but the fuel warning light did come on at the back straight on the last lap. We know we are usually good for about a lap and a half, but it does make you a little nervous. Luckily, we were able to hang on there and get the win.”

Kenton Koch – No. 56 Murillo Racing Mercedes-AMG GT4: “It’s an honor to fill in for Jeff Mosing and to have even been chosen to do this with such phenomenal people. Our Murillo Racing Mercedes-AMG GT4 was super good today, very fast, and when the car is good it makes everyone look good. And when you have an awesome pit crew, it makes the strategy and overall race that much easier. It’s only May, but we have had quite a whirlwind of a year. A couple poles and now we have a winning result, so hopefully we can continue some of that momentum straight to the next race at Watkins Glen.”

Kenny Murillo – No. 72 Murillo Racing Mercedes-AMG GT4: “There was lot of great takeaways from this weekend, and I have to congratulate my teammates in the No. 56. Regarding the No. 72 it was a great opening stint. We showed we could run strong, run up front and run the race we want to run with the Mercedes-AMG GT4, Michelin and the team. A lot of hard work has been put in to get to this point. I am happy with how we performed. Unfortunately, contact put us back, but it was a good recovery from Christian to put us back up to P5. Taking a step back, I am just grateful to be here and driving a Mercedes-AMG GT4 at Mid-Ohio.”

Brent Mosing – No. 65 Murillo Racing Mercedes-AMG GT4: “I knew Kris Wilson was there. He gave me a nudge two or three laps from the end and I said ‘OK, I have to hustle it up here.’ That last lap was total defense, but it was good. My other two best race finishes have been here at Mid-Ohio. That included our first Mercedes-AMG GT4 podium here in the rain, so this has been a very good track for us.”

Tim Probert – No. 65 Murillo Racing Mercedes-AMG GT4: “Our Pro driver and coach Eric Foss in the No. 56 car likes to say we are all swimming in the deep end of the pool here in IMSA, and I think that is very, very true. Murillo Racing did a wonderful job setting up the car for us. Bronze Cup is important, it gives guys like us a chance and maybe inspires some others out there who watch to join in. We are really enjoying Bronze Cup.”

Kris Wilson – No. 11 Capstone Motorsports Mercedes-AMG GT4: “I caught Brent Mosing and he stepped up his pace. He did a really good job. I have to hand it to him, he deserved the win, and I think I used everything up just getting to him. Then I had nothing left once I got there. It was a good race, and the Bronze Cup is cool to have that prize to compete for.”