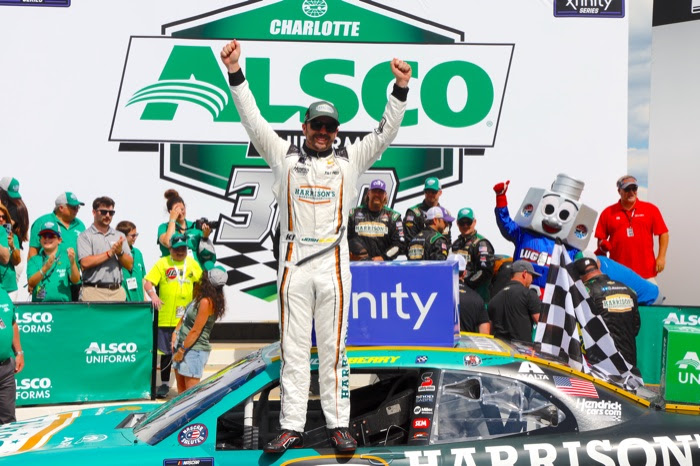 Known for his prowess on short tracks, Berry put his superspeedway skill on full display, leading a race-high 89 laps and beating Ty Gibbs to the checkered flag by 18.039 seconds.

Berry took the lead from fellow JRM driver Justin Allgaier with 23 laps to go and never relinquished it, despite a stirring battle between the two teammates. Allgaier’s hopes of victory were ultimately dashed by a tire failure from impact with the outside wall in his attempt at retaking the lead.

JR Motorsports made it three drivers in the top four at the finish, with polesitter Sam Mayer third and Noah Gragson fourth. Ryan Preece finished fifth.

JOSH BERRY, No. 8 JR Motorsports Chevrolet (Race Winner): “I felt like we had a good car. I wasn’t sure I could rip the fence at Charlotte for 200 laps, but we did it. The battle with Justin (Allgaier) was so intense, we were just battling and racing each other. All in all, an amazing day. I’m really excited for Harrison’s, they’re a regional company with six stores in the Carolinas, so I know they’re excited.

“The reality of it is, all of our cars are phenomenal right now and we’re going to have to race each other. More often than not, Justin and I find ourselves competing for wins. I respect Justin. He’s an underrated race car driver who’s very, very good. That was a tough battle. It came down to who was going to slip. Luckily, I didn’t. It’s amazing. I’ve been running up and down the East Coast, the Carolinas, Virginia. The reality is I never thought I’d get opportunities like this, but the guys at JR Motorsports have stuck with me. We grinded away on the short tracks and never gave up, just kept fighting. So thankful to be here. Winning at Charlotte is really special. It’s always special racing around here. This was always going to be a great benchmark for where we are as a company, and it exceeded our expectations.”

TY GIBBS, No. 54 Joe Gibbs Racing Toyota (Runner-Up): “We were pretty good, we were a little tight-center, so that was our issue. We tried hard to fix it and get to the front. Just track position and getting out front, it was hard to fire off on restarts. That’s where we were struggling the most.

“We need to kind of improve there. My guys worked so hard overnight to get this thing ready. Thank you to them, to (crew chief) Chris (Gayle), (JGR teammate) Kyle (Busch), all the guys on my team. They worked so hard. It would’ve been a lot different (if there was a caution). Hopefully, I wouldn’t have fenced myself.”

SAM MAYER, No. 1 JR Motorsports Chevrolet (Third-Place Finisher): “At the end of the day, it was a good day. A top-three and a good points day with the stages. I felt like we were better than this, and obviously we had to work on it a lot today, both driver and car. We worked our tails off, we got back into the top three. Big picture, it’s a good points day. This one definitely is disappointing. I’m looking for more. I’ve been ready to win one for a while now. This one, for some reason, just hurts a little more.

“It feels good to be a bit disappointed with a top-three, but it shows that we’re getting better.”