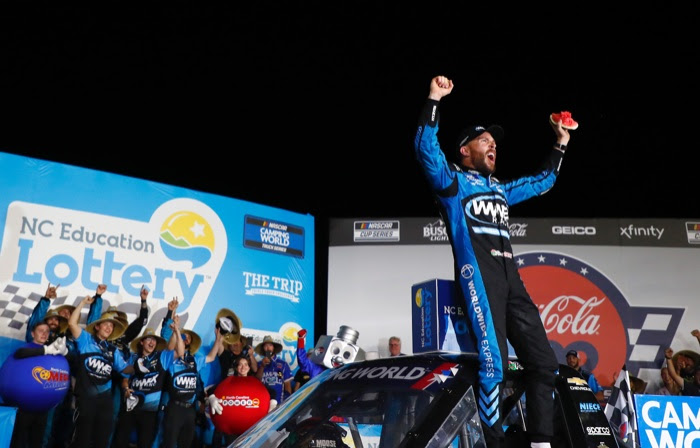 Chastain inherited a golden opportunity to win after Carson Hocevar, his Niece teammate, was involved in a crash with Ryan Preece to set up the final caution. Chastain restarted second on the green-white-checkered restart with two laps to go, and used pushes from John Hunter Nemechek and Grant Enfinger to take the lead and hold it in the closing moments.

The win also marked the fourth Truck Series triumph for Chastain, who used Friday’s race as a tune-up for Sunday’s Coca-Cola 600 in his bid for his third NASCAR Cup Series win of the year.

Hocevar’s hopes of a breakthrough Truck Series victory appeared all but set in the closing laps, when a three-second lead over Preece seemed to be more than enough. A caution with four laps to go, however, forced Hocevar to get aggressive in keeping Preece behind him on the restart – and both drivers paid a high price.

Hocevar slid into Preece and both went into the wall, necessitating another restart and knocking each contender out of the running.

Chastain inherited a front-row spot on the final restart and sped to the point thanks to help from Nemechek, who finished third, and Enfinger, the runner-up.

ROSS CHASTAIN, No. 41 Niece Motorsports Chevrolet (Race Winner): “My thoughts are, Carson Hocevar won this race. He did such an amazing job. He’s a great kid and he’s going to take somebody’s job in this sport, maybe mine, and he’s going to win a lot of races. There were times when I felt like one of our teammates could win, but I’m happy to pick up the smashed watermelon pieces and win this race.

The Cup cars drive very differently than the trucks, but it’s always good to add to the muscle memory – especially at the same track as Sunday’s race (the Coca-Cola 600). I’ll race a wheelbarrow to get more laps.”

GRANT ENFINGER, No. 23 GMS Racing Chevrolet (Runner-Up): “The track seemed like it changed a lot from practice. I honestly feel like we were a top-five or top-six truck most of the race. We were able to have a good pit stop there. Our guys have honestly carried us there this year. Very, very proud of the hard work from all the guys at GMS Racing.”

JOHN HUNTER NEMECHEK, No. 4 Kyle Busch Motorsports Toyota (Third-Place Finisher): “We weren’t very good all night. Just thankful for all my guys on this No. 4 truck. We never stropped working on it, we put ourselves in the ballpark and we were able to have a shot there at the end. We struggled from the time we unloaded, so we have a little bit of work to do, but I’m proud of all the guys, proud of all the hard work they’ve put in and we’re just racking up top-fives.”