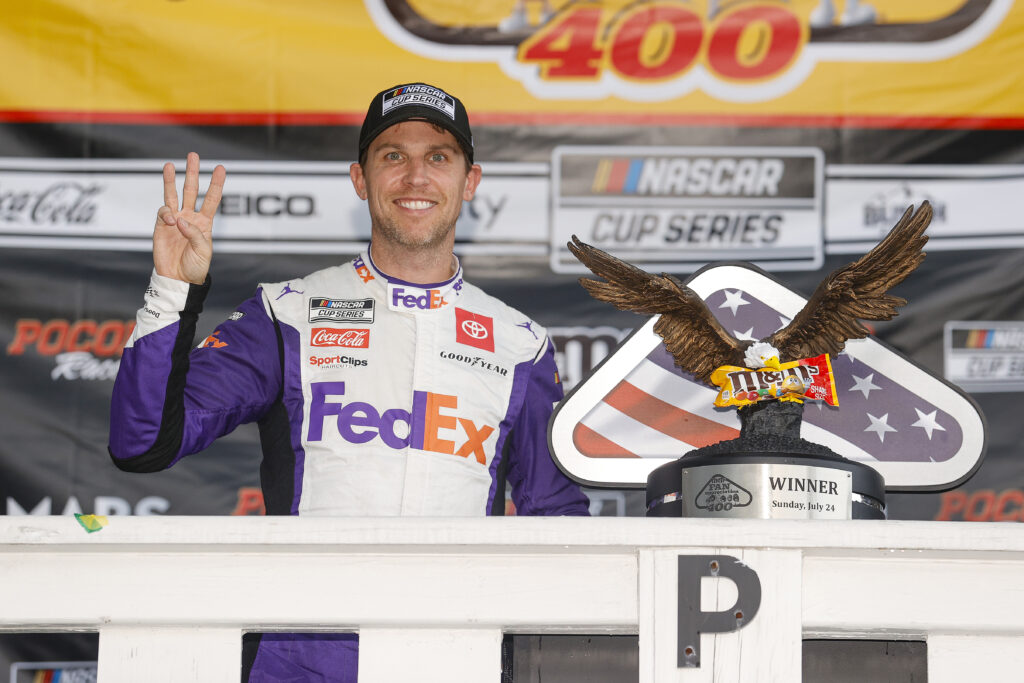 LONG POND, PA (July 24, 2022) – Denny Hamlin won the pole position for Sunday’s M&M’s Fan Appreciation 400 at Pocono (Pa.) Raceway and then hoisted the race trophy after the checkered flag flew. But Hamlin’s history-making seventh victory at the storied venue was hardly so straight-forward.

His No. 11 Joe Gibbs Racing Toyota hit the Turn 2 wall on the opening lap of the race. He brought out a caution flag on Lap 42 after spinning in Turn 2. And he was involved in another high-profile incident on a restart with 18 laps remaining, colliding with season rival Ross Chastain while vying side-by-side for the race lead.

And even then, Hamlin’s crew chief Chris Gabehart kept reminding him of a tenuous fuel situation in the closing laps. But Hamlin kept the field at bay on the ensuing restart with 13 laps remaining and cruised to his third race win of the 2022 season by 0.927-second ahead of his Joe Gibbs Racing teammate Kyle Busch.

“It’s the team,” the 41-year old Virginian exclaimed of the win. “They just had the race strategy there to get us back up front from the mistake I made.

As for the incident with Chastain, Hamlin did not hesitate to answer. The two drivers have been involved in several high-profile run-ins during races this season.

“What did you want me to do? What did you expect me to do?” Hamlin said. “I got position on him, and he just ran out of race track.”

Asked if it was now over between the two, if the feud was essentially settled now, Hamlin smiled and said, “We’re gonna just keep racing hard until we get the respect back from these guys.

“And it’s not just that. We’ve been wrecked four times, twice while leading in the last 10 months and I’m at the end of it.”

Chastain, a two-race winner in his first season driving for Trackhouse Racing, emerged from the Infield Care Center and acknowledged the situation wasn’t entirely unexpected.

“That’s something that’s been coming to me for a few months now,” Chastain said of expecting retribution.

“I’m proud of the effort by Trackhouse. To keep bringing fast cars like that is a testament to GM and Chevrolet. It was a really fast one and we’ll be back at Indy.”

Asked if he thought the score was now settled Chastain just smiled.

“I’ve been owed that and probably some more for a few months now.”

Busch, who started on the front row with Hamlin, led a race best 63 of the 160 laps and was one of 10 leaders on the day but was just unable to make a run on Hamlin after losing track position on a late race restart.

It was a significant day for 19-year-old Ty Gibbs, grandson of team owner Joe Gibbs. Gibbs was tabbed only a couple hours before the race start to fill in for 23XI Racing driver Kurt Busch, who was involved in an accident during qualifying on Saturday and not cleared medically to compete on Sunday.

Gibbs, who finished 18th in the No. 45 23XI Racing Toyota, was all smiles and gratitude after the race, even taking a moment to thank team co-owner, NBA legend Michael Jordan for the opportunity.

The victory for Hamlin was the 49th of his career tying him with NASCAR Hall of Famer Tony Stewart on the NASCAR Cup Series All-Time Wins List. It was the 199th win for Joe Gibbs Racing and it set Hamlin apart as the all-time winningest driver at Pocono Raceway, breaking a tie with another NASCAR Hall of Famer, Jeff Gordon.

With the win, Hamlin jumps up into second place behind Elliott in the Playoff outlook.

With five regular season races remaining, Elliott still leads the points standings with a 100-point advantage on Chastain and a 108-point edge on Ryan Blaney, who was involved in a late-race accident.