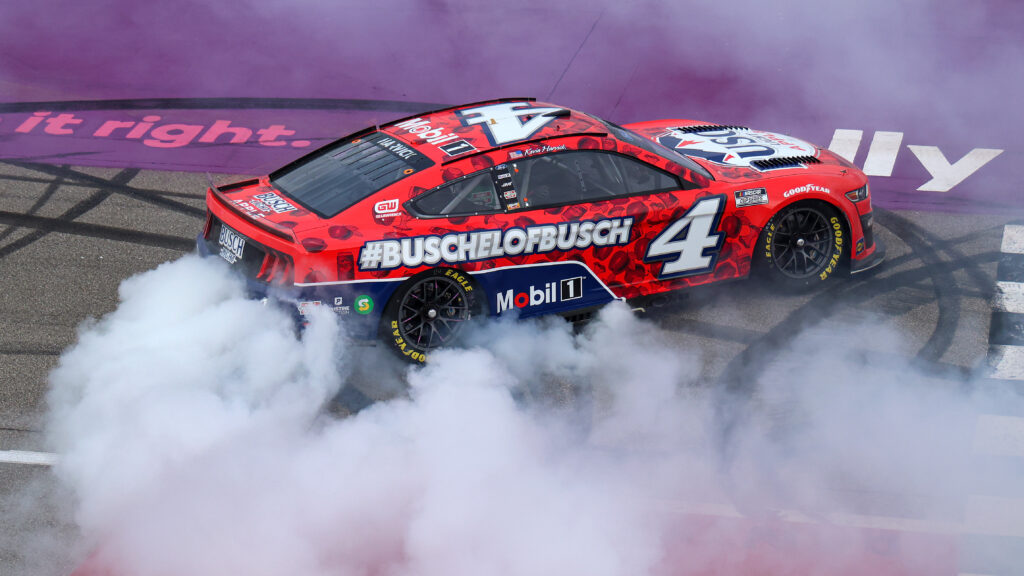 On a blustery Sunday in the Irish Hills of Michigan, Kevin Harvick saved his season.

Grabbing the lead and pulling away after a restart on Lap 166 of 200 at Michigan International Speedway, Harvick won the FireKeepeers Casino 400 by 2.903 seconds over pole winner Bubba Wallace and leap-frogged bubble-riding Martin Truex Jr. in the NASCAR Cup Series Playoff standings.

Harvick’s victory ended a 65-race drought for the 46-year-old former series champion from Bakersfield, California. The win was his sixth at Michigan and his fifth in the last seven races at the 2.0-mile track.

Harvick now has 59 victories in the series, 10th-most all-time. With the win, the eighth straight at the track for Ford drivers, he is likely to qualify for the NASCAR Cup Series Playoff. Harvick is the only driver to have earned a postseason spot every year since the current elimination format was introduced in 2014, the same year he won his series title.

“Everybody who doubted us doesn’t know us,” said Harvick, who led 38 laps on Sunday, 25 more than he had led in the previous 22 races combined. “They, obviously, know we thrive in these types of situations. And a lot of things went our way today, which we haven’t had all year long—have things go our way and have things fall our way.

“And then there at the end we pitted, didn’t go a lap down, and the caution came out, got control of the race. That’s the thing I struggled with the most today was traffic and the restarts and just having to make up ground. Once I got clear track, that baby was hunting.”

As Harvick indicated, the race broke his way. The driver of the No. 4 Stewart-Haas Racing Ford brought his car to pit road on Lap 158 for a green-flag stop. A lap later, NASCAR called the seventh caution of the afternoon when Ross Chastain’s Chevrolet and Christopher Bell’s Toyota collided in Turn 4.

Harvick remained on the lead lap and inherited the top spot when the contending cars ahead of him pitted under the yellow. With Wallace bottled up behind Joey Logano’s Ford after the Lap 166 restart, Harvick opened a gap of more than four seconds in clean air and cruised to his first win since Sept. 19, 2020 at Bristol.

Wallace was disconsolate as he replayed the final restart in his head.

“Just replaying everything I could have done,” said Wallace, who led twice for 22 laps. “Took the top there on the restart. Thought I could hang with the 4 (Harvick), and just got to racing the 5 (Kyle Larson) and the 22 (Logano). And 22 did a good job of getting another Ford contract, helping a Ford win.

“Just all in all an incredible weekend. Appreciate my team. Wished we could have got Toyota in the Victory Lane. Wish we got (sponsor) McDonald’s back in victory lane. She was fast all week, man. Just I’ll wear this one on my heart for a while. I failed everybody.”

Denny Hamlin finished third in arguably the fastest car in the race. On his final pit stop under caution on Lap 160, Hamlin incurred a penalty for too many men over the wall when his crew corralled a runaway tire from an adjacent pit stall.

Hamlin restarted 22nd and charged to third, 3.910 seconds behind the race winner.

The race was delayed just over an hour due to inclement weather. That didn’t deter the fans in the grandstands, the largest crowd at Michigan International Speedway since 2016. In addition, infield camping was sold out for the weekend for the first time since 2012.

Blaney now leads Truex by 19 points for the final Playoff berth, which will be determined on points if there are no additional unique winners in the next three races.

An early nine-car accident in Turn 2 eliminated two of the top five qualifiers—Kyle Busch and Austin Cindric. Moments after a restart on Lap 25, J.J. Yeley’s No. 15 Ford got loose, checked up and turned sideways in the middle of the pack.

In the ensuing melee, Cindric’s No. 2 Ford crashed nose-first into the outside wall and Buch’s No. 18 Toyota also sustained terminal damage. The cars of Yeley, Almirola, Ricky Stenhouse Jr. and rookie Harrison Burton also were knocked out of the race.

“Just chaos ensued on the restart there, and I don’t know what started it, but the 10 (Almirola) got spun in front of me, and then I got wedged between him and the wall,” said Busch, who had elected to pit on Lap 22 under a competition called because of a rainstorm that delayed the start of the race.

“When you get back there, things happen on restarts, especially when you have guys that stayed out and don’t have tires versus those that have four tires. Was not really in a hurry and knew we were coming to stage points in another 40 laps or so and it was going to be a long run to get there—and then we all just crashed.”