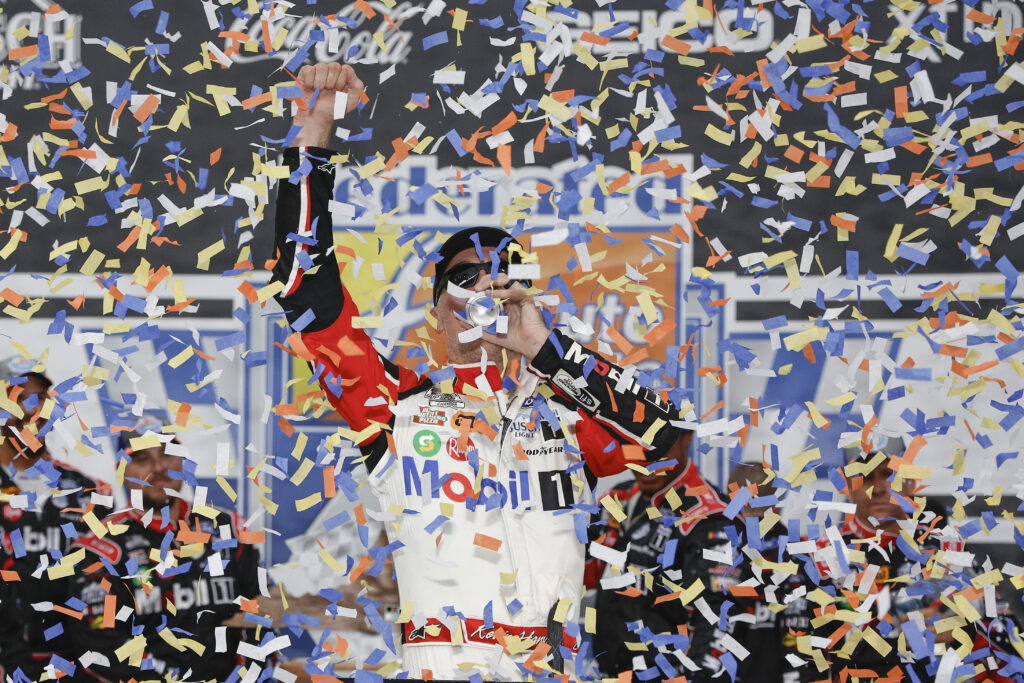 Now the driver of the No. 4 Stewart-Haas Racing Ford has a two-race winning streak.

The NASCAR Cup Series victory was Harvick’s fourth at the .75-mile short track—his first there since 2013—and the 60th of his career, tying him with Kyle Busch for most among active drivers and ninth all-time.

Harvick led twice for 55 laps, passing eventual sixth-place finisher Joey Logano for the lead on Lap 334 and regaining it from Denny Hamlin on Lap 353 at the end of a cycle of green-flag pit stops.

“It’s like I said last week, the cars have been running good week-in and week-out,” Harvick said, “and you see that we have a lot better understanding of what’s going on with how we adjusted on the car after the first run and were able to get our car handling a lot better.

“I think as it got dark, the race track really came to our Mobil 1 Ford Mustang.”

By pitting one circuit earlier than Logano on Lap 340, Buescher leap-frogged the Team Penske driver and began to chase Harvick, who led the final 48 laps. Buescher got to Harvick’s bumper in traffic but couldn’t make a run for the lead.

The driver of the No. 17 Roush Fenway Keselowski Racing Ford lost his chance for a serendipitous victory when Harvick lapped Bubba Wallace and Buescher stayed trapped behind Wallace’s No. 23 Toyota and fell two seconds behind.

“Just burned the rear tires up,” said Buescher, who needs a victory to qualify for the Cup Playoffs. “Ultimately that’s on me. Lapped traffic didn’t do us any favors, either, but ultimately just got to keep the rears under us a little bit better so we can have a little bit better shot there to get after him for the win.”

On 12-lap fresher tires, Bell charged forward, slipped past Buescher on Lap 396 of 400 and closed on Harvick before running out of time.

“Well, I knew he was coming, but I forgot to shift down the front straightaway the last time,” Harvick said. “I was not paying attention, and he got closer than he should have. I made a mistake there a couple laps doing the same thing. I wasn’t shifting on the back, and I was shifting on the front. There was a lot going on, and made a couple mistakes, let him get too close.”

Bell, who already has a victory to his credit this season, seemed pleased with the runner-up result.

“Really, really proud of (crew chief) Adam Stevens, this entire 20 group,” Bell said. “The Rheem Camry didn’t feel very good at the beginning, and we had our fair share of troubles (including a spin on Lap 250), and the pit crew really came through at the end there with some blazing stops and allowed us to get in front of the 11 (Hamlin), who was on the same strategy as us and get up there and contend.”

In the battle for the last position in the Playoffs, Ryan Blaney widened his advantage over Martin Truex Jr. despite finishing 10th to Truex’s seventh. The difference was in stage points. Blaney scored 11 to none for Truex and now leads the 2017 series champion by 26 with two races left in the regular season.

Hamlin came home fourth, followed by Chase Elliott. Logano led a race-high 222 laps, but his No. 22 Ford wasn’t as strong in the twilight as it had been earlier in the race.

“Yeah, I think just as the sun went down and the track cooled off, (we) lost some turn on our car,” Logano said. “Kevin and some others got a lot better the last couple of runs in the race. When it was hot and slick, that was probably our strength with the Shell Pennzoil Mustang.”

The Cup Series heads for Watkins Glen next Sunday for the 25th regular-season race.