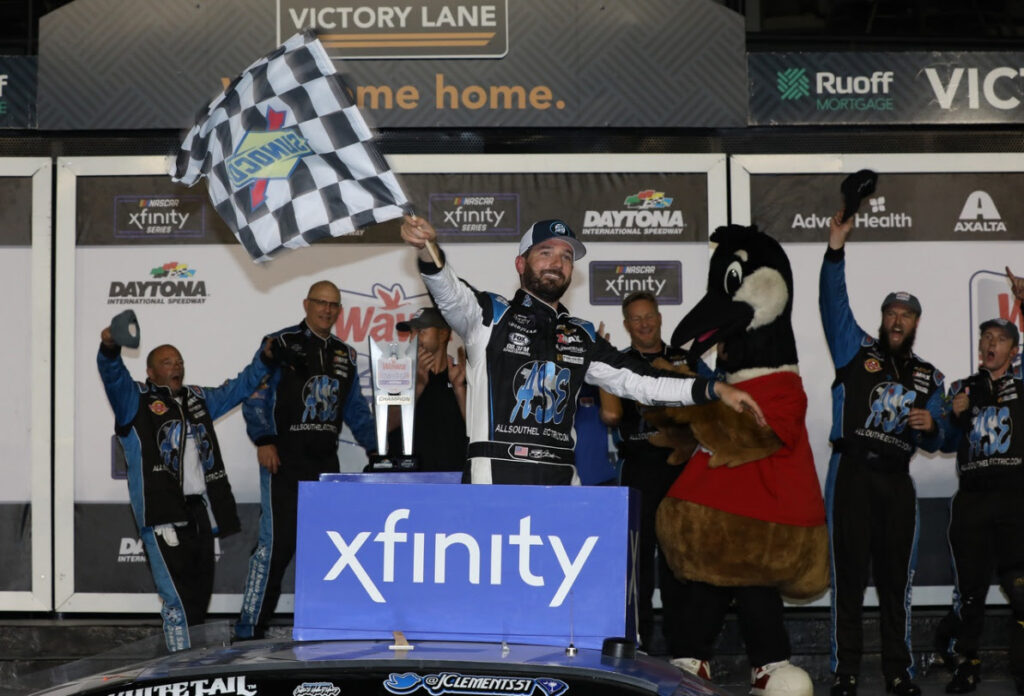 Clements’ victory in the Wawa 250, a race that started roughly three hours late and ended shortly before 1:30 a.m. on Saturday, was his first at Daytona and the second of his career. Both of Clements’ victories have come on August 27, his first at Road America on Aug. 27, 2017.

“I’m speechless, man—I don’t even know what to say,” said Clements, who grabbed a Playoff spot with the victory and shoved Ryan Sieg into 13th place in the standings, 12 points below the cut line. “We survived that big wreck back there (in the first overtime). It was like a ‘Days of Thunder’ wreck.

“Then I was like, ‘If we can just keep up with these guys, it’ll be a good day—top five and bring this car home in one piece.’ But, wow! This is incredible.”

As race leader Austin Hill lost electrical power and steered his Chevrolet to the apron, Clements got a push from Sage Karam on the third overtime restart on Lap 117 and was out front on the final lap when NASCAR called the 11th caution for Riley Herbst’s spin on the backstretch. Timmy Hill finished second, followed by AJ Allmendinger, Brandon Brown and Karam, who posted his career-best finish.

Eighteen of the 38 cars that started the race were already in the garage when Clements took the checkered flag.

A massive multicar wreck on Lap 98 of a scheduled 100 sent the race to overtime. First, Landon Cassill’s Chevrolet slapped the outside wall and collided with Jeb Burton’s Camaro.

Then, at the front of the field, Daniel Hemric moved down the track and turned off the nose of Noah Gragson Chevrolet, igniting a melee that involved eight cars.

But that was just the appetizer before a feast of crumpled chassis that followed the restart for the first attempt at overtime. On Lap 104, Brown’s Chevrolet got loose on the backstretch in front of Riley Herbst’s Ford.

Brown spun, and 13 cars were damaged in the ensuing chaos. But the hardest hit of the night came on overtime attempt No. 2.

Chain reaction contact between the cars of Clements, Allmendinger and Noah Gragson turned Gragson into the path of Landon Cassill’s Chevrolet. The impact from Cassill’s car spun Gragson around 360 degrees and tore the body off the front clip.

Gragson had led a race-high 54 laps at that point.

A multicar accident on Lap 83 put a dent in Sheldon Creed’s Playoff hopes and destroyed his No. 2 Richard Childress Racing Chevrolet.

John Hunter Nemechek’s No. 26 Toyota got loose off Turn 2 and spun off the front bumper of Brown’s Chevy.

“All of a sudden, I was looking at the inside wall,” Nemechek said. “I’m not sure what happened, but I felt like I was hooked in the left rear.”

Creed’s Camaro hit Nemechek’s car and spun to the inside and shot back across the track into traffic, demolishing Joe Graf Jr.’s Ford. The wreck kept Creed below the Playoff cut line, 55 points behind Cassill for the last spot, with three races left before the Playoff field is set.

The action continues Saturday night at The World Center of Racing with the Coke Zero Sugar 400, the last race of the regular season of the NASCAR Cup Series that will set the stage for the 10-race, 16-driver Playoffs. There are two open spots that remain, which will be filled after the checkered flag flies. Defending Coke Zero Sugar Champion Ryan Blaney, along with Martin Truex, Jr., is on the Playoff bubble. If either of those two, as well as any other eligible non-winning driver goes to Ruoff Mortgage Victory Lane, that driver will automatically make the Playoffs.

Fans can also stay connected with Daytona International Speedway on Twitter, Facebook and Instagram, as well as the all-new NASCAR Tracks App, for the latest speedway news.

bout Daytona International Speedway
Daytona International Speedway is a state-of-the-art motorsports facility and was awarded the SportsBusiness Journal’s prestigious Sports Business Award for Sports Facility of the Year in 2016. Daytona International Speedway is the home of The Great American Race – the DAYTONA 500. Though the season-opening NASCAR Cup Series event garners most of the attention – as well as the largest audience in motorsports – the approximately 500-acre motorsports complex, also known as the World Center of Racing, boasts the most diverse schedule of racing on the globe. In addition to at least nine major event weekends, the Speedway grounds are also used extensively for events that include concerts, civic and social gatherings, car shows, photo shoots, production vehicle testing and police motorcycle training. The iconic venue was the site of a host of motorsports events early in 2022, beginning with AHRMA Classic Motofest and the Rolex 24 At DAYTONA in January, and the 64th DAYTONA 500, which debuted the first points race for NASCAR’s ‘Next Gen’ car as part of Speedweeks Presented by AdventHealth, in February. The tradition-rich 81st Annual Bike Week At DAYTONA returned in March, featuring DAYTONA Supercross and the DAYTONA 200. May saw the “Welcome to Rockville” concert and the Heroes Honor Festival while during July 4th weekend, the track, in association with Torneos, hosted the first annual Daytona Soccer Fest. The NASCAR Cup Series returns for the final race of the regular season with the Coke Zero Sugar 400 on Aug. 27 while Saturday, Aug. 26 will see the Wawa 250 for the NASCAR Xfinity Series.