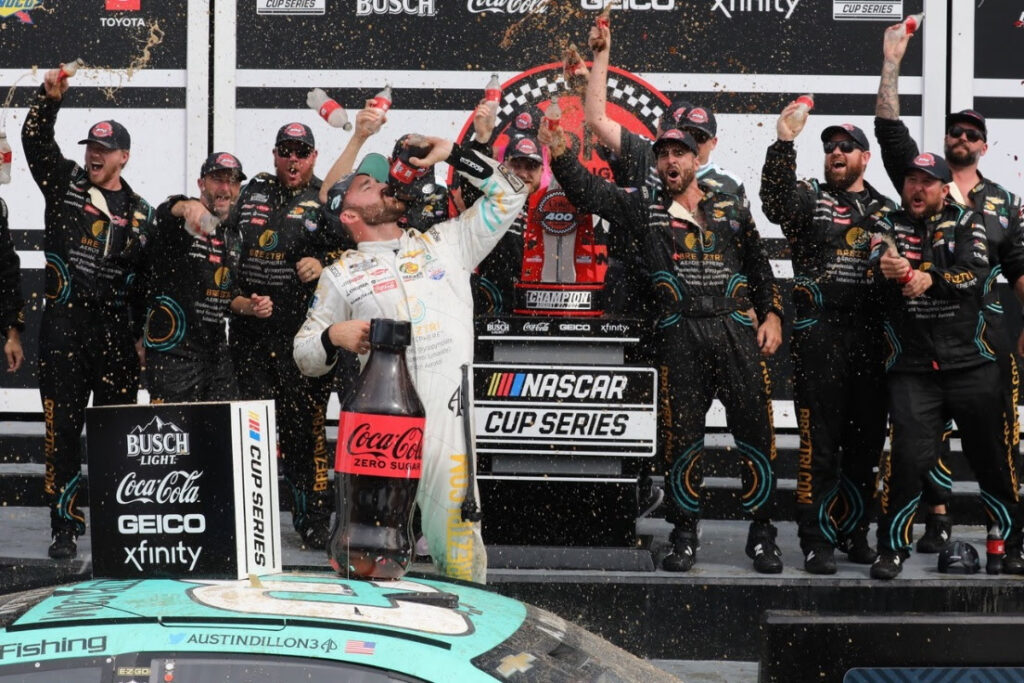 Dillon’s victory in Sunday’s rain-delayed Coke Zero Sugar 400 at Daytona International Speedway—his first of the season and his second at the track—needed the convergence of several different circumstances to fall into place.

After avoiding serious damage in a wreck off Turn 4 on lap 125, Dillon survived a subsequent 13-car melee in Turn 1 and took the lead before rain halted the race. After a red-flag period of 3 hours, 19 minutes, 57 seconds, Dillon fell behind 2022 Daytona 500 winner Austin Cindric and trailed him from the restart on Lap 145 of 160 until he made the race-winning move on Lap 158.

As the cars reached Turn 1, Dillon tapped Cindric’s No. 2 Team Penske Ford, and the Chevrolets of Dillon, Reddick and Landon Cassill moved past as Cindric made a magnificent save on the apron. Reddick, the race runner-up, closed up to the bumper of Dillon’s No. 3 Chevrolet and drafted with his teammate to the finish line, holding off a last-ditch run from Cindric, who finished third, just .140 seconds behind the winner.

“I had a big run to him, and then I had my teammate, the 8 (Reddick), back there. I knew we were in good shape there to the end. He did a good job checking up any kind of run. Just a little too much push there and got him (Cindric) loose.”

Cindric said the bump was fair game, give what was on the line for Dillon.

“I think that’s fair game any race of the season, but that meant a lot for him to win that race,” Cindric told Fox Sports’ Bob Pockrass on pit road. “He had three cars that were certainly going to be able to work with him…

“I feel like he got the run too late, and then he hit me straight on the entry to the corner. Just glad I saved it, glad I got a shot to still come back up through the field—but I hate losing.”

Dillon’s victory knocked Truex out of the Playoff and handed the final berth to Ryan Blaney, who finished three points ahead of Truex in the final regular-season standings.

When heavy rain stopped the action 21 laps from the finish, it looked as if Dillon might be awarded the victory.

As the cars sped toward Turn 1 on Lap 138, a sudden rain began to fall. The cars of Justin Haley, Daniel Hemric and Denny Hamlin broke loose at the front of the field, and the cars behind them were unable to stop on the slick asphalt and plowed into the wreck.

Dillon’s No. 3 Chevrolet, which had been damaged in a wreck off Turn 4 on Lap 125—and ended its slide facing backward on pit road—was the first to emerge from the Lap 138 chaos at cautious pace and shortly thereafter was confirmed as the race leader by NASCAR.

“We ran into rain in the middle of Turn 1 and just lost it,” Hamlin said of the 13-car pileup. “We had rain down the front. So about 10 seconds before we got into Turn 1, it was raining. I’m sure the fans felt it, and then they watched us all pile in there.”

NASCAR opted to wait out the rain, dried the track and lifted the red flag at 3:54 p.m. The resumption didn’t change the winner, but it enabled Blaney to move up the leaderboard past wrecked cars to a 15th-place finish, enough to eliminate eight-place finisher Truex from the Playoff.

Cassill came home fourth, followed by Noah Gragson, as only 10 drivers finished on the lead lap, and only 17 were running at the end.

Early in the race, Blaney got a serious scare, as far as his Playoff hopes were concerned. On Lap 31, Blaney’s No. 12 Team Penske Ford was third in line in the bottom lane behind Erik Jones and Denny Hamlin when Jones’ No. 43 Petty GMS Chevrolet got loose and lost momentum off Turn 2.

Blaney slammed into the back of Hamlin’s Toyota, turning the No. 11 Camry toward the infield. As the bottom lane compressed, Christopher Bell’s No. 20 Toyota spun behind Blaney, shot across the track and knocked Blaney’s Mustang into the outside wall, severely damaging the right-front quarter of Blaney’s car.

The eight-car accident knocked Bell and Brad Keselowski out of the race, denying Keselowski a Playoff spot for the first time since 2013.

“Somebody wrecked in front of me,” Keselowski said. “I’m not really sure exactly what happened, but there were just a bunch of cars wrecking in front of me. I didn’t have anywhere to go and couldn’t slow down in time, so I hate it for our team.”

“We had a really fast race car. We were working our way to the front.”

Truex earned six points with a fifth-place finish in Stage 1 and raced to a runner-up result in Stage 2, good for nine points, as Blaney continued to lose laps to the lead pack. The first two stages reduced Blaney’s lead over Truex in the standings to 10 points, but a wreck on the backstretch early in the final stage halted Truex’s charge.

On Lap 102, Michael McDowell, running second, pulled out of line with a run on leader Joey Logano, but Reddick’s off-center hit to McDowell’s back bumper sent the No. 34 Ford rocketing into the outside wall. The contact ignited an eight-car melee that eliminated the machines of McDowell, Ross Chastain and William Byron.

The wreck ended the Playoff hopes for McDowell, who had restarted in the lead on Lap 101. Truex’s car was damaged, too, but not terminally. Ultimately, though, it was the damage in that wreck that kept the 2017 series champion from maintaining a gap over Blaney sufficient to earn the final Playoff spot.

“That’s definitely a lot more stressful than I wanted coming into here, but I just got to give a lot of props to the 12 group, you know, for fixing it and sticking with it all day,” Blaney said. “That’s why you do it.

“Your day can start off like that, and you just stay with it and stay in the game. And it was definitely beneficial for us.”

Tickets for the 65th Annual DAYTONA 500, set for Sunday, Feb. 19, 2023, are on sale now and can be purchased online at www.daytonainternationalspeedway.com or by calling 1-800-PITSHOP.

Fans can also stay connected with Daytona International Speedway on Twitter, Facebook and Instagram, as well as the all-new NASCAR Tracks App, for the latest speedway news.

About Daytona International Speedway
Daytona International Speedway is a state-of-the-art motorsports facility and was awarded the SportsBusiness Journal’s prestigious Sports Business Award for Sports Facility of the Year in 2016. Daytona International Speedway is the home of The Great American Race – the DAYTONA 500. Though the season-opening NASCAR Cup Series event garners most of the attention – as well as the largest audience in motorsports – the approximately 500-acre motorsports complex, also known as the World Center of Racing, boasts the most diverse schedule of racing on the globe. In addition to at least nine major event weekends, the Speedway grounds are also used extensively for events that include concerts, civic and social gatherings, car shows, photo shoots, production vehicle testing and police motorcycle training. The iconic venue was the site of a host of motorsports events early in 2022, beginning with AHRMA Classic Motofest and the Rolex 24 At DAYTONA in January, and the 64th DAYTONA 500, which debuted the first points race for NASCAR’s ‘Next Gen’ car as part of Speedweeks Presented by AdventHealth, in February. The tradition-rich 81st Annual Bike Week At DAYTONA returned in March, featuring DAYTONA Supercross and the DAYTONA 200. May saw the “Welcome to Rockville” concert and the Heroes Honor Festival while during July 4th weekend, the track, in association with Torneos, hosted the first annual Daytona Soccer Fest. The NASCAR Cup Series returns for the final race of the regular season with the Coke Zero Sugar 400 on Aug. 27 while Saturday, Aug. 26 will see the Wawa 250 for the NASCAR Xfinity Series.