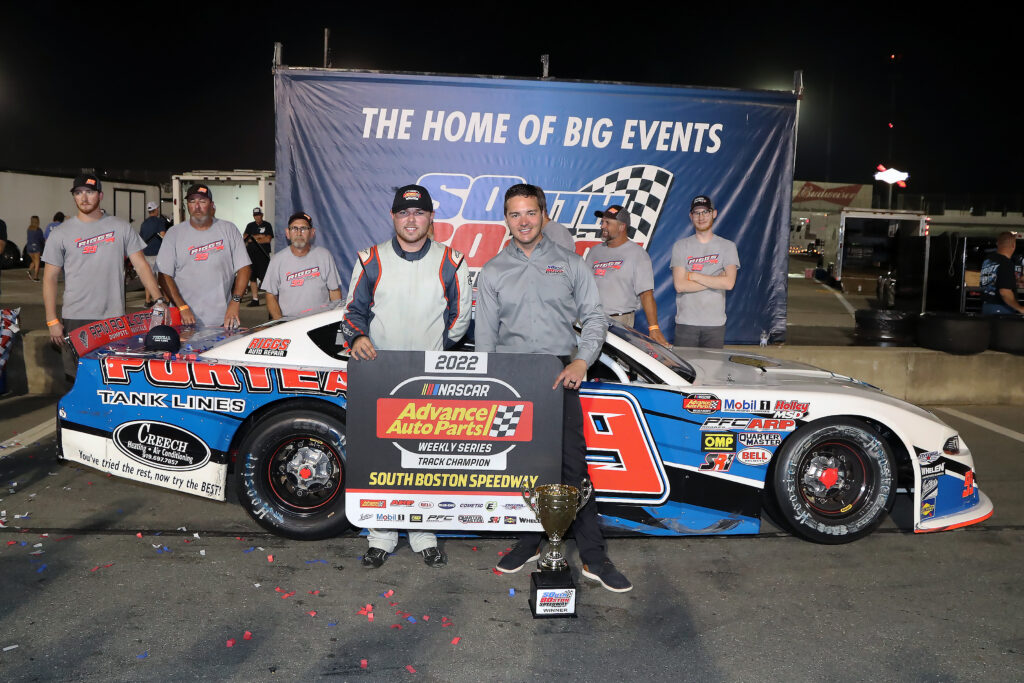 The Bahama, North Carolina resident entered Saturday night’s twinbill with a 20-point lead over Sellers and a 22-point edge over Jacob Borst of Elon, North Carolina. The pair of runner-up finishes was more enough to give Riggs, a 10-time winner at the speedway this season, the track championship.

The magic Sellers has known at South Boston Speedway in recent seasons returned over the final two nights of the season. He won three of the season’s final four races to cap his season at the .4-mile oval with four victories.

“Man, this was an amazing night,” Sellers said of the sweep. “We executed perfectly. Everybody said you’re worried about points, and I said all we can do is go win the race. Everything else would have to fall into place. We came up a little short.”

While Sellers lost the battle for the South Boston Speedway championship, he was able to further close the gap on Riggs in the chase for the NASCAR Advance Auto Parts Weekly Series national championship.

“We gained some good points tonight,” Sellers pointed out. “We’ve just got to go out and do what we know to do and that’s just stay focused and try to win races.”

With an inverted start among the top 10 finishers of the first race, Sellers started tenth in the nightcap but needed only nine laps to get to the front of the field, Once Sellers passed Borst for the lead on the ninth circuit he never relinquished the lead, finishing 1.6 seconds ahead of Riggs in taking the win and the sweep.

Myers finished second in both races, cutting into Barnes’ final margin, but it was not enough to prevent Barnes from winning the championship.

The night belonged to Eric Winslow of Pelham, North Carolina. Competing in the division at South Boston Speedway for the first time this season, Winslow swept the twinbill, with Myers taking second place in both races and Barnes finishing third in both races.

Winslow started on the pole and led the entire distance in the first race and led all but one lap in the second race.

Entering Saturday night’s 25-lap Southside Disposal Pure Stock Division race, Phillips had finished second six times and was still looking for his first win of the season. He started the night with 10 Top-Five finishes and held an eight-point edge over Johnny Layne of Halifax, Virginia, who entered the event with four wins this season.

Crews, running a partial schedule of races this season, earned his seventh victory in eight starts at South Boston Speedway in the 25-lap race. He passed Layne, the pole winner, on the opening lap and never lost the lead. He sped across the finish line 1.822 seconds ahead of Layne in taking the win.

DeCarlo did not have the best performance Saturday night, but it was good enough as he finished fourth while Currin finished fifth, a result that earned him the South Boston Speedway Virginia State Police HEAT Hornets Division championship.

Steven Layne of Nathalie, Virginia took the checkered flag first in the 20-lap race, but his car failed a post-race inspection by track NASCAR officials, resulting in disqualification.

That turn of events gave apparent runner-up Kendall Milam of Keeling, Virginia the win. The victory was his second of the season.

Dillon Davis of Nathalie, Virginia was listed as the runner-up in the final results, with Landon Milam of Keeling, Virginia, DeCarlo and Currin rounding out the top five finishers.

Cameron Goble of Ringgold, Virginia won the pole for the race and led the first 16 laps before being sidelined in a mishap.

Wray, the pole winner, wrestled the lead away from Trey Masengill of Dudley, North Carolina on the second lap and held on to edge Phillips for the win.

The first race of the day will get the green flag at 2 p.m.

Advance adult general admission tickets are priced at $15 each and may be purchased online on South Boston Speedway’s website, www.southbostonspeedway.com, through Friday night, October 21. Advance tickets may also be purchased by calling the speedway office at 434-572-4947 or toll free at 1-877-440-1540 during regular business hours.

Other events at South Boston Speedway this fall include the Country Roads Truck Show on Saturday afternoon, September 17. Classic cars and trucks, low-riders, big rigs, ATVs and more will be on display. That event is managed and promoted by Thorpe Money Enterprises and not South Boston Speedway.

In addition, South Boston Speedway will host the SoBo Drifts Powered By Barlow’s Tire on Saturday, October 29 from 2 p.m. to 7 p.m. More details regarding that event will be announced in the near future.