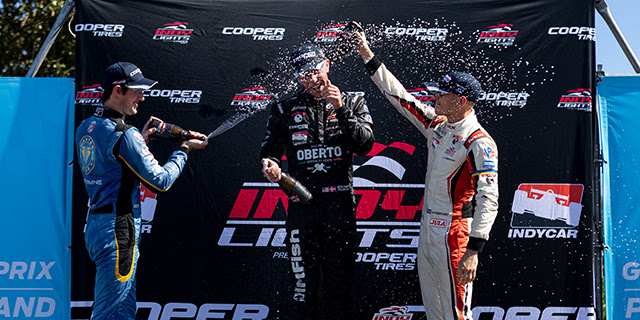 PORTLAND, Ore. (Sunday, Sept. 4, 2022) – Benjamin Pedersen finished the job Sunday in the Indy Lights Grand Prix of Portland, while Linus Lundqvist still has a bit of work to do to reach his ultimate goal.

Danish driver Pedersen, who grew up in Seattle, earned his first career Indy Lights Presented by Cooper Tires victory to complete a dominant weekend at Portland International Raceway in the No. 24 Global Racing Group with HMD car. The win came in the 32nd career Lights start for Pedersen, who started from the pole and led both practice sessions at this event.

“Definitely a dream,” Pedersen said. “We were fastest in every session this week. I don’t think I’ve ever done that before, but at a home event where I grew up, in Seattle, only a couple hours from here, a bunch of local support. It’s just so awesome. I’ve loved every minute.

“I’m so relieved, so thankful.”

Matthew Brabham finished second in the No. 83 Andretti Autosport car, .9651 of a second behind Pedersen, to sustain his faint championship hopes. Championship leader Lundqvist needed to leave this race with a 109-point lead to clinch his first Indy Lights title, but he is 103 points ahead of Brabham after finishing third in the No. 26 HMD Motorsports with Dale Coyne Racing car.

The season ends with a doubleheader on Saturday, Sept. 10 and Sunday, Sept. 11 at WeatherTech Raceway Laguna Seca. Lundqvist only needs to lead by at least 54 points after the Saturday race to lock up the championship. The deal is nearly sealed.

While Lundqvist almost certainly will hoist the 2022 championship trophy next weekend in picturesque Monterey, California, this weekend in the scenic Pacific Northwest belonged to Pedersen. He capped his magic carpet ride by leading all 35 laps of the race.

The only thing that slowed Pedersen on the 12-turn, 1.964-mile road course was two caution periods for separate incidents. But Pedersen never was challenged on either restart in a command performance.

Brabham inherited second after showing the wisdom of a series veteran during a three-way joust for second place on Lap 6 immediately after a restart.

Danial Frost, Christian Rasmussen and Brabham darted around each other for position on the first full lap after a restart. Brabham wisely backed off while Rasmussen and Frost went side by side into the fast Turn 11. The two cars touched, and Frost’s No. 68 HMD Motorsports with Dale Coyne Racing car speared into the tire barrier while Rasmussen’s No. 27 Road to Indy/Stellrecht car was forced across the grass to the escape road.

Frost was unhurt after his race-ending crash, while Rasmussen continued and finished seventh.

That fracas elevated Brabham to second and Lundqvist to third, where they held station for the rest of the race. Lundqvist never mounted a challenge to Brabham over the closing 28 laps, finishing 5.4 seconds behind his closest championship rival to earn his ninth podium finish in 12 starts this season.

“It’s all right,” Lundqvist said. “You always want a little more, you want to win every race if you can, but we just didn’t really have the pace this weekend. Benjamin has been on it since session one. Congratulations to him. It’s always a good feeling to get that first win under your belt.

“But from our side, it was all right. Happy to get away with a podium. We’ll take the points. Obviously, it would have been nice to finish ahead of Brabham and be finished with it, but we’ll see. We still have a good gap, and we’re going to Laguna with some good energy.”