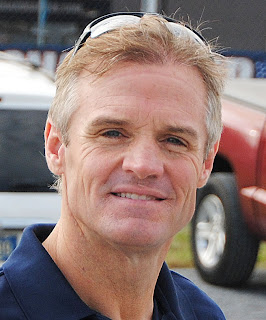 Ok, I admit to being a bit biased on one level. But when I go to the track and put on the honored orange vest to take pictures, I would think the Nascar drivers would cooperate. Instead, many of the drivers turn or have someone stand to block them from photographers, orange vested and the fan variety.

However, some drivers, like Kenny Wallace here, goes out of their way to be accommodating to fans and professionals alike.
This picture was taken when Kenny Wallace walked past me and I looked up and saw who it was. I jogged (as well as a 55 year old can jog) and called to Kenny pointing to my camera. He simply said sure, stopped and let me take several pictures. Kenny then asked if I had what I needed. When I said yes thank you, he said “My Pleasure”.
This makes Kenny Wallace one of my favorite people. I can not tell you how many drivers on pit road before a race turn towards the track to avoid the cameras. Kenny’s brother Rusty, before the race would walk between the cars and the outside pit wall to his car and sit against his car facing the stands until time to get in the car. Never looking up or at the media or fans. If a pretty girl came along with a camera crew, he hit the million dollar smile, but if it was this old man, nothing.
Kenny and several others are truly nice people who know that the fans and photographers make them what they are. I have had similar experiences with Robby Gordon, JJ Yeley, and Ron Hornaday as well. These drivers take the time to give the fans and professional access to a photo because they know it is important. Not every time and every situation after all since sometimes the guy just has to go, but Kenny Wallace has done this kindness several times for me and I have seen him do it for many others time and time again.
That is one reason why I love to watch him on TV whether he is racing or talking. Thank you Kenny. I got what I needed. I hope you get what you need too. An it was a real pleasure. Signed Nascar fans.