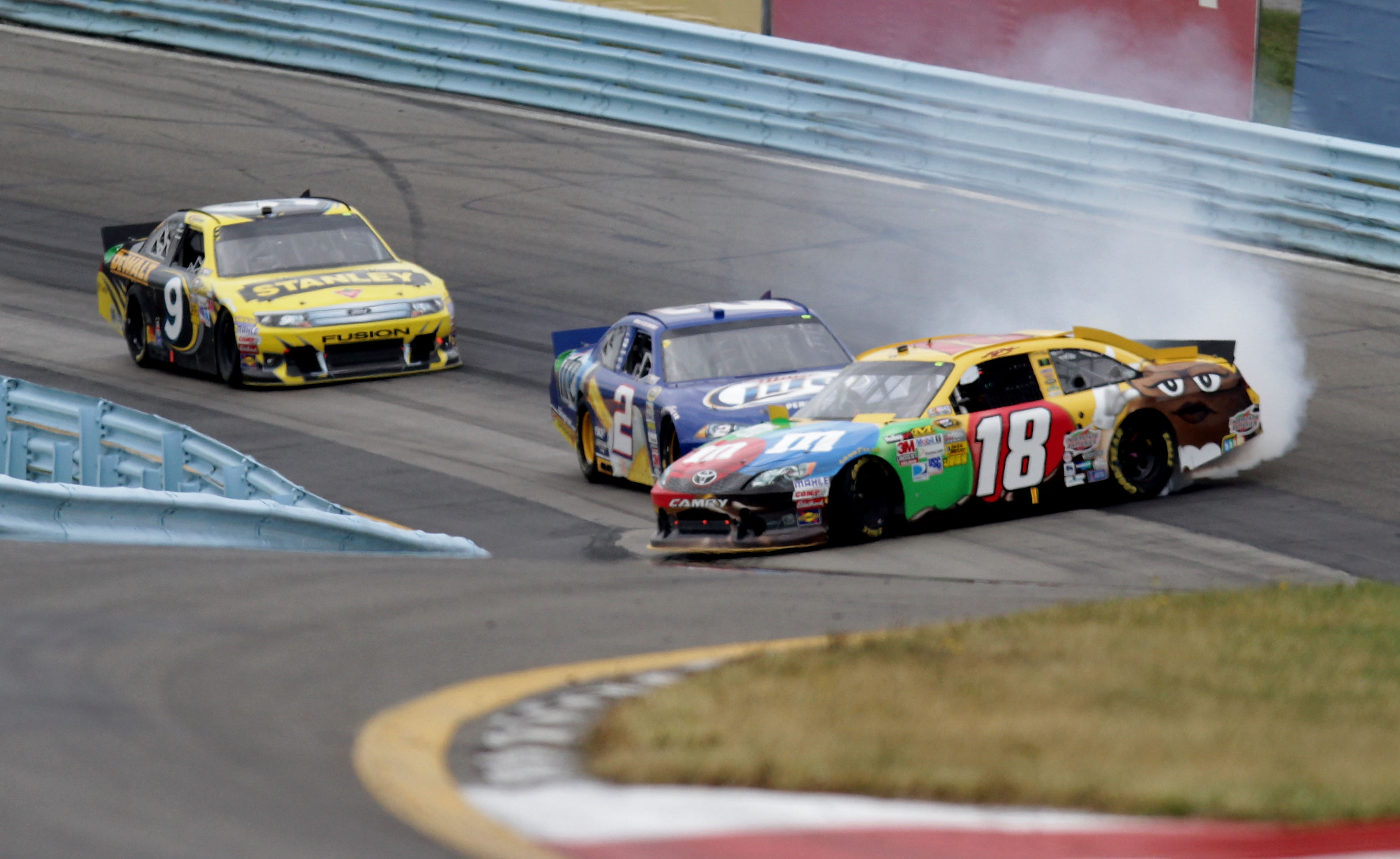 Kyle Busch had the car to beat Sunday at Watkins Glen, but he couldn’t take home the win.

After leading nearly half of the 90-lap race, Busch was able to re-gain the lead of the attrition filed race on a restart with 16 laps to go, using the extra pavement on the outside of turn one to do so.

From there, it looked to be smooth sailing for the No.18 as he opened his gap to more than two seconds of the cars of Brad Keselowski and Marcos Ambrose.

As the field made their way to the white flag, Busch’s car began to slow entering turn six, allowing Ambrose and Keselowski go close as the three made their way back to turn one.

Coming off the corner three-wide, Busch was able to hold the lead into the esses with Keselowski all over his back-bumper.

That’s when it all let loose as Busch spun off the second corner in front of the Keselowski and Ambrose, with Keselowski suffering damage to the right-front of his Dodge.

Heading into the inner-loop, Keselowski’s car began to smoke from the contact with Busch, allowing Ambrose to close up to his back bumper as the two went into the grass exiting the corner.

Sliding from the oil-slicked turn-five, the two slid, with Keselowski holding the advantage down the short-shute.

With a bold move to the inside, Ambrose was able to get around Keselowski into turn six, only to slid on the exit, making for a side-by-side battle into the final corner.

Off the final corner, the two slid again, with Ambrose taking the lead off the corner and grabbing the win in the Finger Lakes 355 at Watkins Glen International.

“I was the first one to slip in the oil in the brake parts,” said an overjoyed Ambrose in victory lane. “It was just getting worse and worse.

“The oil was moving around the race track, and you’re just taking chances. You gotta commit at that point of the race.

“It’s bad luck to Kyle, great racing though….Just awesome fun, that’s the way it should be.”

As the race wound down, it looked as though Ambrose was going to run out of time to take the victory after pushing his No.9 Ford to the limit in the closing laps.

“I just burned everything up. Our strategy was to do three stops. All of the sudden, that caution came out and we had to pit and got to ninth or tenth or something.

“I just used the stuff up coming through, and you just gotta take ‘Lady Luck’ when she strikes. Today was our day.”

For Ambrose, this is his second-consecutive win at Watkins Glen, and the second Sprint Cup Series win of Ambrose’s career.

The win also extend’s the Australian driver’s streak of no finishes outside the top-three in his five starts at Watkins Glen International.

The results of the race weren’t the only thing that changed during the closing laps. The points battle did just about the same thing.

After his third place finish in the wild ending, Jimmie Johnson in the new Sprint Cup point leader by one point ahead of Greg Biffle.

Dale Earnhardt Jr., who was the points leader entering the day, spun in the closing laps and fell to fourth in the standings.

Next up for the Sprint Cup Series is the two-mile Michigan International Speedway.