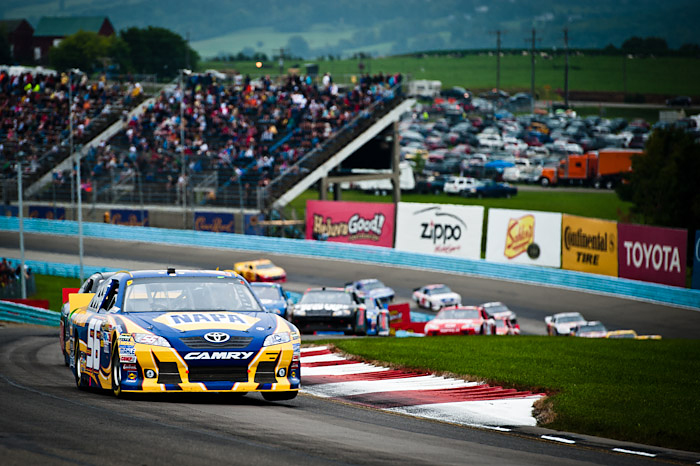 Friday,August 10,2012: For the final time this season, it’s time to go road racing, this time at the famed Watkins Glen International for the Finger Lakes 355.

When you hear “Finger Lakes”, you think of a beautiful place to take  family vacation. This weekend didn’t start anything near the word “beautiful” as rain plagued much of Friday, which was two hold two Sprint Cup practice sessions and one Nationwide Series practice.

As the rain lifted, the Sprint Cup cars had a chance to get an hour of practice after the Nationwide Series practice session.

Brad Keselowski jumped to the top of the time sheets early, with Marcos Ambrose, Tony Stewart and others close behind in speed.

An incident in the closing moments of the session when the No.30 Toyota of Patrick Long lost an engine in turn two, spraying fluid on the racing surface. Denny Hamlin, who wasn’t far behind the Long car, slid in the fluid and into the wall as Jeff Burton’s Chevrolet hit the back of Hamlin’s Toyota.

All three drivers went to backup cars for the rest of the weekend.

As the session came to a close, the No.39 of Ryan Newman jumped to the top of the practice sheet, but it was short lived. Before NASCAR stopped practice, Kurt Busch was able to set the fast time in his Chevrolet.

With this being the last time drivers and teams would be able to fine-tune their setups for the race, many teams opted to run near 20 laps in the session.

This was also the last tune-up before qualifying which was to be held later in the morning.

Early on, Marcos Ambrose set the top mark. But it was short lived when the Michael Waltrip Racing Toyota of Clint Bowyer, who won the most recent road course race in Sonoma,Cali. back in June, put his number atop the board.

When the session was over, it was the 2008 winner at Watkins Glen, Kyle Busch, placing the fastest lap in preparation for the race and qualifying.

For the second consecutive week, Juan Pablo Montoya was able to take the top-spot in qualifying after winning the pole for Sunday’s Finger Lakes 355.

Montoya’s lap in 69.438 seconds seconds at 127.020 mph broke the track record for Sprint Cup Series cars which was set by Kyle Busch, who will start alongside Montoya for Sunday’s race, one year ago.

“I think the lap was a really good lap.  You always make mistakes here and there.  It’s never perfect.  You always think I went too far here, I went too little there, I lost it there, but I think everybody does.  It’s about how well you can put it all together.  I thought we did a pretty good job of that,” said Montoya after his qualifying lap.

Only 43 cars attempted to qualify for Sunday’s race at Watkins Glen, so no drivers missed the starting field.