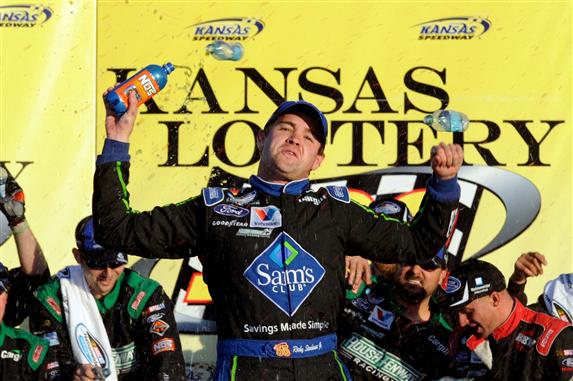 It’s not every day that you see a driver come back from two laps down to win a race. But that’s what Ricky Stenhouse Jr. had to do if he wanted to find his way to victory lane Saturday at Kansas Speedway.

While racing with Joey Logano near the mid-race point, the drivers with the most wins in the 2012 season made contact off the fourth turn, leaving both cars with damage. However, Stenhouse Jr.’s Ford Mustang was left with the bulk of it, falling two laps down with repairs on pit road.

In order to salvage as many points as possible, the No.6 crew was forced to play the strategy game if they wanted to have any chance to stay in the hunt for the championship.

Through timely caution flags, Stenhouse Jr. brought his Ford to the attention to his crew under numerous occasions through tires and fuel. While the tires provided him with speed, the fuel ultimately was the deciding factor.

That would hold true for others as well as the race hit its closing stages.

Looking to grab his first Nationwide Series win since September, 2011, Kyle Busch was holding a sizeable lead over Paul Menard who had led the most laps on the day (109). But as the laps wound down, Menard began to cut into Busch’s lead before the final caution of the race flew with 3 laps to go.

However, while fuel was the king in Stenhouse Jr.’s deck of cards, it was the joker in the deck for Busch.

In order to assure enough fuel to make it to the finish, championship leader, Elliott Sadler, Austin Dillon and Danica Patrick all went to pit road for a splash of fuel. That would prove critical on the race’s final restart.

Coming to the green flag, Menard’s Chevrolet sputtered and slowed onto the apron of the track as Busch pulled away with the lead, but Stenhouse Jr. was closing in fast.

On the white flag lap, Busch still held the lead until his No.54 Toyota slowed in the middle of the third and fourth turn, allowing Stenhouse Jr. to bypass him for the lead off the final corner to win Saturday’s Kansas Lottery 300 at Kansas Speedway.

“I thought it was over for sure,” said Stenhouse Jr. regarding his chances for victory after the contact with Logano.

“I was trying to get some debris off the grille, and Joey (Logano) checked up and I ran into the side of him. Thought it killed us but we don’t ever give up.”

The win marks the sixth time in 2012 that Stenhouse Jr. has gone to victory lane, most among drivers who compete for the Nationwide Series championship.

For Busch, his sixth place finish at Kansas sums up the way his 2012 season has gone in the Nationwide Series.

“That’s our year, man. What a frustrating day, but oh well. You get defeated sometimes.”

“Just killed us, took a lot of points from us. We struggled with the car all weekend and though we managed the best we could to get the best finish we could.

“Running for a championship, we had to pit at the end and give up track position.”