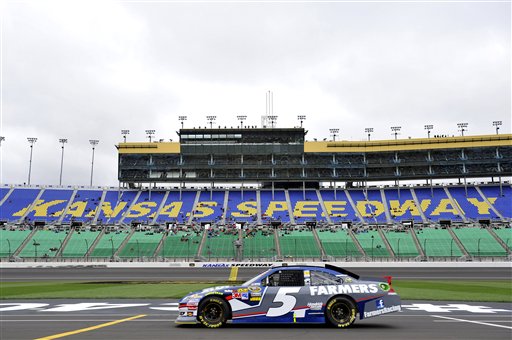 What You Need To Know:

Weather Forecast: Partly sunny, with a high of 82°

What To Watch For:

– The newly reconfigured Kansas Speedway has given each team a big learning curve throughout the weekend. Even with two extra days of testing the new track, some teams are struggling to adapt to the treacherous tracks surface which has produced the fastest speeds in the history of the track.

– With any new track surface, it seems to always present an extra importance on track position for drivers and teams. What comes wit that territory in recent years is a lack of four-tire pit stops and fuel strategy being used from the beginning of the race with it being difficult to pass on a one-groove race track.

– In the two preliminary races held this weekend (ARCA and Nationwide), we’ve seen that passing can be done. However, the majority of it comes on restarts which have been often in each of the two races. While the bottom groove has been the fastest way around the track the entire weekend, in order to make a pass, drivers will need to navigate towards the middle of the banking.

– After five of the ten Chase races in the books, it’s safe to say the championship is down to five drivers. With Brad Keselowski, Jimmie Johnson, Denny Hamlin, Clint Bowyer, and Kasey Kahne all proving to show good results at Kansas Speedway in the past, Sunday’s race could very well be the race where two drivers separated themselves from the rest.

News of the Weekend:

– We finally learned when the 2013 Chevrolet SS that will be used in the Sprint Cup Series next season will be unveiled to the public. That unveiling will take place in Las Vegas on Nov. 29.

– It was confirmed on Friday that Tony Gibson will take the role of crew chief for Danica Patrick in 2013. Gibson, who currently is crew chief for Ryan Newman, will step down from the No.39 pit box following Sunday’s race at Kansas and will begin work as crew chief for Patrick at Texas Motor Speedway.

-Matt Borland will take over as crew chief for Newman effective next weekend at Martinsville Speedway. Borland and Newman have a past history together which includes 12 wins in the Sprint Cup Series and 37 poles.

– After months of speculation which manufacture Richard Petty Motorsports would have ties to in 2013, it was made official that the team will stick with the Ford Motor Company for next season. Although driver lineups were not confirmed in the announcement, Marcos Ambrose said he was close to a deal with the team. The status of Aric Almirola for next season is unknown.