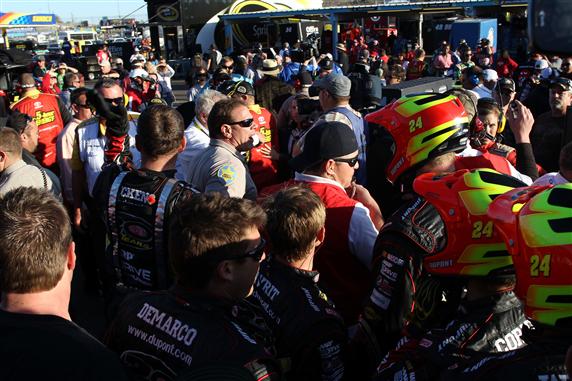 Jeff Gordon, driver of the No. 24 car, was found to be in violation of Sections 12-1 (actions detrimental to stock car racing) – altercation with another competitor on the race track during the race – and has been fined $100,000, docked 25 championship driver points and put on NASCAR probation until Dec. 31. Rick Hendrick, owner of the No. 24 car, has also been penalized with the loss of 25 championship owner points. Alan Gustafson, crew chief of the No. 24 car, also was found to be in violation of Section 9-4A (at all events, crew chief assumes responsibility of his driver, car owner and team members) and has been placed on NASCAR probation until Dec. 31.
Brian Pattie, crew chief of the No. 15 car, violated Sections 12-1 and 9-4A and has been fined $25,000 and placed on NASCAR probation until Dec. 31.
Brad Keselowski, driver of the No. 2 car, has been fined $25,000 and placed on probation until Dec. 31 for violating Sections 12-1 and 20-6.7A (cars and drivers will not be permitted to carry onboard computers, automated electronic recording devices, electronically actuated devices, power distribution modules, power conditioners, micro-processors, recording devices, electronic digital memory chips, traction control devices, digital readout gauges and the like, even if inoperable or incomplete) – driver had a cell phone in his possession onboard the race car.
All of these violations occurred during the Nov. 11 event at PIR.
DAYTONA BEACH, Fla. (Nov. 12, 2012) – “Following a thorough analysis of the actions that took place during Sunday’s race at Phoenix International Raceway, we have issued penalties based upon our review. The decisions announced today cover NASCAR’s full assessment of penalties for the incidents that occurred.
“There’s no doubt that a unique set of circumstances combined with a championship battle on the line resulted in raw emotions coming into play. We consider the penalties appropriate and those involved understand our decision and we expect them to abide by them.”
Tags: 2012 NASCAR Sprint Cup Series season AdvoCare 500 Brad Keselowski Clint Bowyer Featured Fight Jeff Gordon NASCAR Sprint Cup Series News Official Release Phoenix International Raceway