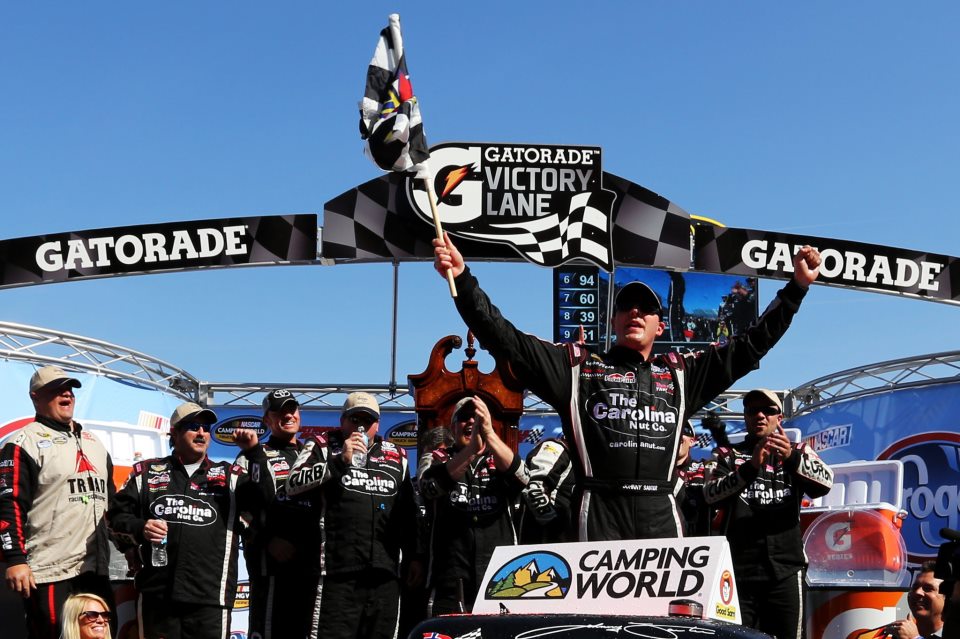 There’s not a better way to start out a season than to win the opening two races.

Johnny Sauter took claim to that statement as he won Saturday’s Kroger 250 at Martinsville Speedway.

Starting the race fourth, Sauter didn’t have far to go in taking his second win of the season.

“It was a long day,” said Sauter in a makeshift victory lane on the front stretch of Martinsville Speedway.

“Tire wear was amazing. We kinda had an idea that it was going to be like that all day.”

The majority of the 250-lap event was dominated by first-time pole sitter Jeb Burton, who lined up next to Sauter on the final restart of the race with thirty-three laps to go.

“We just lost forward bite off the corner. We could kill them going in the middle, coming off we just just couldn’t stay with them at the end,” said Burton who led a race-high 154 laps on the day.

Sauter was able to make the pass on Burton in the “slow lane (outside)” of the track while Burton was on the bottom.

Able to drive his truck deep into the first corner, Sauter pulled ahead of Burton’s Chevrolet  down the backstretch and took the race lead for good heading into turn three.

“I just tried to time it just right, that’s the key,” said Sauter about his pass on the final restart.

“Two-for-two starting out, this is just unbelievable.”

By taking the early season wins at Daytona International Speedway and Martinsville, Sauter becomes the first driver to win the opening two races in a Truck Series season in the nineteen-year history of the series.

That meant 16-year-olds and up could compete in the series for the first time since Kyle Busch back in 2001.

17-year-old Chase Elliott, son of former NASCAR champion Bill Elliott, was the highest finishing driver under 18 in the sixth position.

Erik Jones, driving a truck for Sprint Cup diver Kyle Busch, ran in the top-five at parts of the day and ultimately finished in ninth.

The next race for the Camping World Truck Series is Sunday, April 14 at Rockingham Speedway in North Carolina.

Sauter will head into that race with a twelve-point lead over Burton in the championship standings.