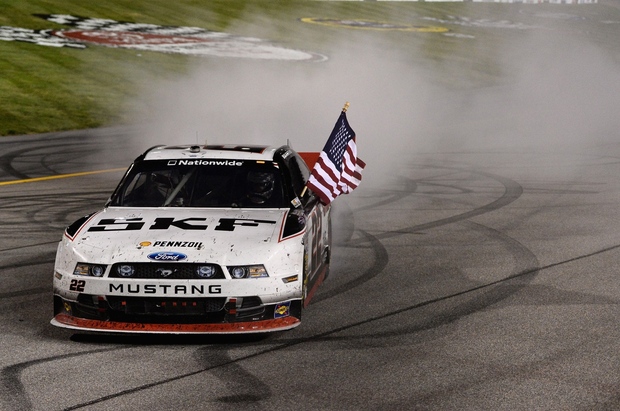 Keselowski passed Kyle Busch to the lead with nine laps left, with Harvick following into second place a lap later. Keselowski crossed the finish line .718 seconds ahead of Harvick with Busch rolling home in third.

The victory was Keselowski’s first of the season in the Nationwide Series and the 21st of his career.Brian Vickers finished fourth, followed by Regan Smith.

The victory was a breakthrough of sorts for Keselowski, who won for the first time this year in either the Nationwide or Sprint Cup Series, after Penske Racing switched from Dodge to Ford during the offseason.

“It’s very gratifying,” Keselowski said. “We’ve had a lot of seconds this year (two in the Nationwide Series), and we’ve been really close on the Cup side. We just haven’t been able to get that win. We’ve struggled here at Richmond, too, both in the Cup and the Nationwide cars, so it’s great to get that turned around and finally get to Victory Lane in a Ford.

“This is a Mustang (in NNS). Now we’ve got to win a Fusion (in Cup). The Fords have been really fast, and we finally closed one out today.”

Harvick’s car was superior over long runs, but he didn’t have time to Keselowski over the final run.

“Our car was pretty good on the longer runs,” Harvick said. “The 22 (Keselowski) was really good for the short runs, and I had to try to fend him off as good as I could… All in all, it was a fun night. He just had a better car for the short runs. I enjoyed the race, back and forth. I always want to win, but it was still enjoyable.”

Harvick dominated a long green-flag run from Lap 107 until NASCAR called the third caution for Juan Carlos Blum’s contact with the Turn 2 wall on Lap 151. After pit stops under the yellow, however, Keselowski wrestled the lead from Harvick on Lap 158, powering his No. 22 Ford to the inside of the No. 33 Chevrolet.

Keselowski’s lead was short-lived. On lap 170, Harvick regained the top spot near the start/finish line. After two laps of intense racing, Busch took over the second spot from Keselowski on Lap 177 but trailed Harvick by 1.763 seconds.

Busch was closing the gap when Tanner Berryhill’s spin in Turn 2 brought out the fourth caution on Lap 190. Harvick was off pit road first for a restart on Lap 197, and he, Keselowski and Busch were running 1-2-3 when Kevin Swindell spun in Turn 2 to cause the fifth yellow on Lap 201.

Keselowski grabbed the lead after the subsequent restart on Lap 210, but one lap later, a hard wreck in Turn 3 involving series championship hopefuls Austin Dillon, Brian Scott and Justin Allgaier slowed the field once again and set up a Lap 221 restart with Keselowski at the point.

Harvick passed Keselowski to the outside off the restart, but on Lap 225, as Harvick went to the inside to block Keselowski, Busch powered around both cars to the outside to take the lead before the seventh caution slowed the race on Lap 228.

Note: Seventh-place finisher Sam Hornish Jr. retained the series lead by one point over Smith… Scott and Nelson Piquet Jr. — and their crews — skirmished after the race after repeated contact between their cars in the closing laps.  Scott accused Piquet of kicking him below the belt. Both drivers were called to the NASCAR hauler for further discussion.