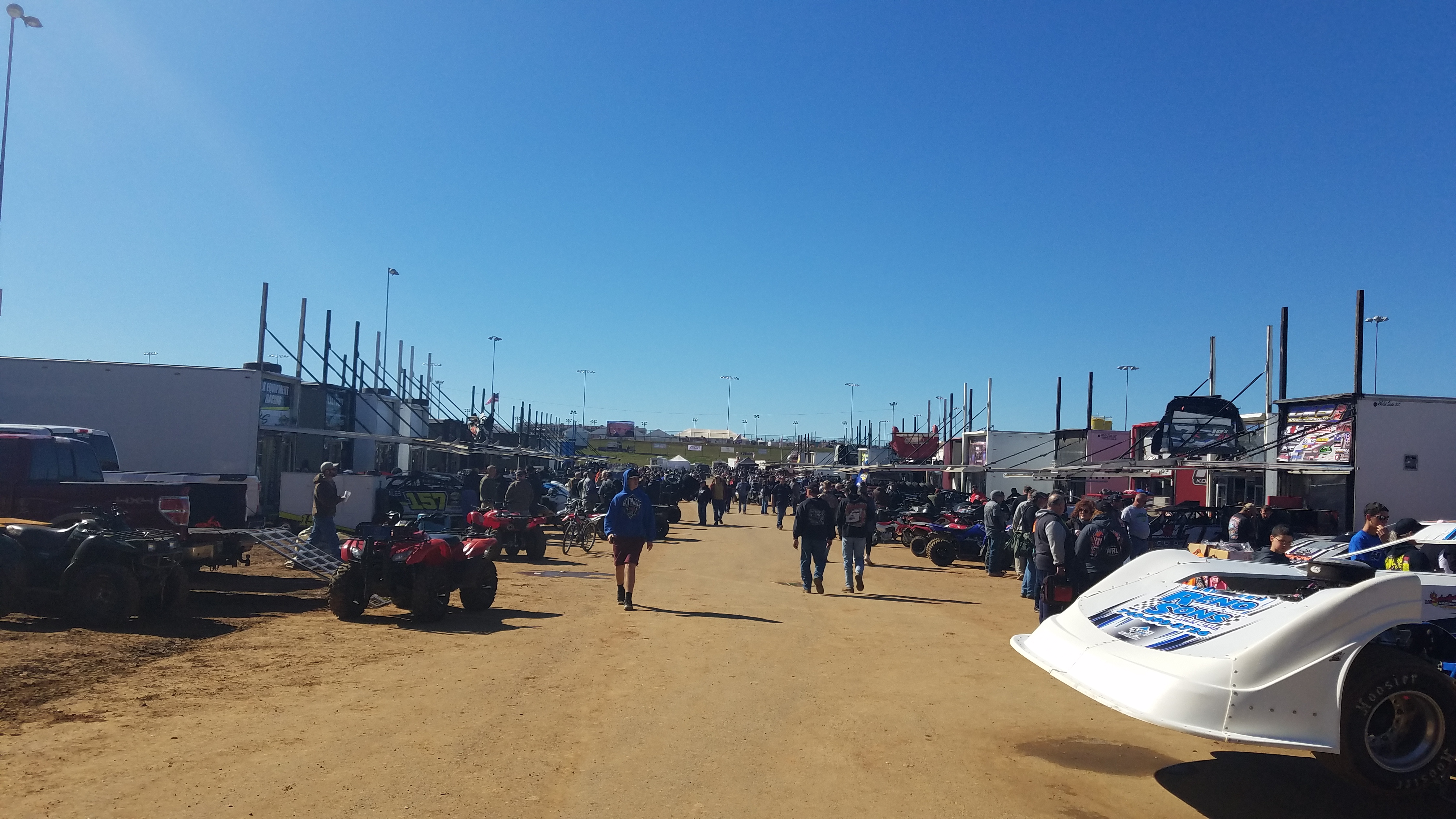 After a whirlwind trip to Charlotte for the World of Outlaws World Finals that featured Sprint Cars, Super Late Models, and Big Block’s over a three day period I have come to the conclusion that dirt racing is definitely thriving. Thousands of people flocked to Charlotte to see some of the biggest dirt stars in the sport battle it out for this yearly supershow. This isn’t a Crown Jewel event for any of the three series but it is an event that thousands put on their calendars in January and look forward to all year long.

There is nothing quite like the World Finals at Charlotte. As a lifetime fan of dirt track racing there is just something about the atmosphere at Charlotte for this event that makes it feel like no other dirt racing event on the planet. This event can’t compare at all to the prestige of the Knoxville Nationals, the World 100, or Super Dirt Week but it’s something special. You have fans of each series converging in Charlotte to watch their favorite drivers and cars. Some fans like all three series and others just come to see great racing. It’s kind of like going to a college football game and having fans of the opposing teams talking smack to one another about who is better.

The Sprint Car fans proudly trump the fact that their cars are the fastest on planet dirt and the reaction time and overall skill it takes to pilot these vehicles is just a notch above the other classes. Late Model fans like to call the Sprint’s the “push and flip” class. Late Model racing is much bigger in the south than Sprint Cars or Big Blocks so the biggest contingent of fans seem to be the Late Model folks. Big Block fans are the more polite, level headed bunch of the three. They seem to just want everyone to get along.  At the end of the day all of these jabs are in good fun for the most part and each fanbase can appreciate the other cars that are participating in the weekend events. But, to watch the fans bicker among each other about who is better really does remind you of a college football rivalry.

Despite weather moving in on Thursday night forcing an early stoppage and the Friday show being delayed for several hours due to continued rainfall, the fans still came out in droves. For the Saturday finale the grandstands actually sold out. The pits were packed with fans as well. I looked around on Saturday afternoon at the full stands and full pits and thought to myself that dirt racing is in a great place. Looking at the stands at the three NASCAR races at Texas this weekend, the same couldn’t be said for them.

All three divisions of cars at Charlotte had great turnouts with 40+ Big Block Modified’s, 50+ Sprint Cars, and 75+ Super Late Models. When you have over 150 cars show up for your race, you are doing something right. The first several years of it’s existence the Dirt Track at Charlotte had a reputation for a track that just ate cars alive. Whether it be Sprint Car’s or Late Models, the track often produced very rough conditions and lots of torn up sheet metal. They have turned the corner and the racing over the past several years has been great.

The first set of features on Saturday afternoon were all great races. When you say the words day racing to dirt fans most of us will roll our eyes and groan. Because day racing is as bad as a four letter word 99% of the time for dirt racing fans. Most of the time for day races tracks become locked down, one groove, drizzling crapstorms. While dusty, the Saturday afternoon races all produced some top flight competition.

The first Saturday afternoon feature saw Brett Hearn hold off a hard charging Tim McCreadie, who started in 25th, in the 40 lap feature event. Matt Sheppard, who secured the 2018 championship this weekend, started in fifth and finished third. However, Sheppard had a flat tire early in the event and had to go all the way to the tail before he rallied back to a top three finish. There was racing all through the field in this afternoon race with fans on the edge of their seats as McCreadie and Sheppard rallied towards the front.

Next up, the Super Late Models put on a heck of a show with Brandon Sheppard and Tim McCreadie swapping the lead back and forth several times with Sheppard narrowly edging McCreadie out in the 50 lap feature event. Racing was intense throughout the field with a lot of three wide racing in the middle of the pack. A tight Super Late Model points battle saw Chris Madden lose out on his championship pursuit when his No. 44 broke an oil line on the sixth circuit. Sheppard came into this race third in the standings but with the win he edged closer to Mike Marlar, who worked his way from an eighth starting spot to finish third.

Not to be outdone, the Sprint Cars had a fast and furious 30 lap feature that saw slidejobs a plenty and the 2018 Kevin Gobrecht Rookie of the Year Ian Madsen taking home the win. Kyle Larson Racing’s Shane Stewart blew a tire and smacked the wall while leading and running away from the field on lap 13. On the restart, Brian Brown got pushed up into the outside wall and launched into a vicious flip in turn one. Luckily, he walked away from the crash. Again, the daytime track conditions proved to be on point with Logan Schuchart rallying to third from a 20th place starting spot.

The nightcap races were all good as well with the Sprint Car race being phenomenal. 2018 series champion Donnie Schatz clawed his way from 10th to have a war of slidejobs with Logan Schuchart. Schatz, who is now a 10-time World of Outlaws Craftsman Sprint Car Series Champion, edged Schuchart for the win.

Tim Fuller was able to track down series champ Matt Sheppard in the closing laps of the 40 lap Big Block feature to take home the win. Billy Decker came home third and the winner of the first feature on Saturday, Brett Hearn worked his way from a ninth starting spot to finish fourth in the second feature race.

The World of Outlaws Super Late Models were last on track Saturday night for their second feature of the day. Legendary campaigner Scott Bloomquist dominated the race taking home the $12,000 check for his efforts. Mike Marlar, in his first run at a World of Outlaws championship, was able to clinch the title by 28 points over Brandon Sheppard by running a calculated and smart race. Marlar went into tire conservation mode while running second and slid back to a comfortable sixth place finish. Sheppard finished third but it was not enough to overtake Marlar in the points.

Six huge races took place on Saturday, and judging from the smiling faces leaving the track, I think a lot of them will be returning again in 2019. With so much talk about how racing is down and the sport is in bad shape I don’t think those folks are looking at dirt track racing. It’s not just Charlotte, dirt tracks across the country have had spectacular crowds all season long. But the attendance at Charlotte definitely puts an exclamation mark on the dirt season.

Big thanks to all those who make the World Finals at Charlotte possible and I hope this tradition continues for years to come. Judging by the attendance and quality of racing, I think it’s a safe bet that truly “All Dirt Roads” will continue to lead to Charlotte for the end of the season extravaganza!