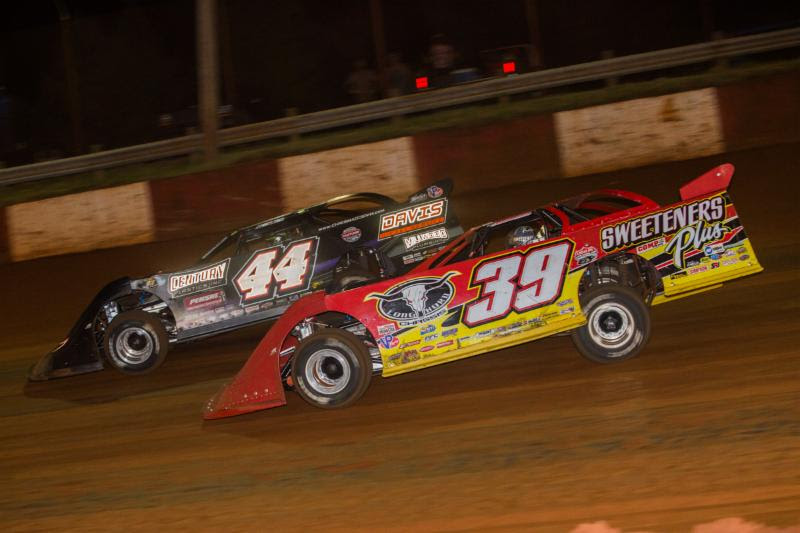 ROME, GA (September 30, 2018) – Chris Madden found his way to Victory Lane on Sunday night at Rome Speedway to become the twentieth different winner in Lucas Oil Late Model Dirt Series competition this season.
The South Carolina-native held off a charging Tim McCreadie to win the Lucas Oil Rome Showdown. Jonathan Davenport finished third, with Tyler Millwood and Dale McDowell rounding out the top five.
Madden made a daring move around Jimmy Owens and race-leader Scott Bloomquist after a lap-eight restart to take control of the race. The South Carolina native then had to withstand not only a number of caution flags, but a hard-charging from McCreadie, who came from his tenth starting spot to challenge Madden for the top spot. A restart with two laps to go set-up a dramatic finish with Madden holding off McCreadie to score his first Lucas Oil victory of the year.
Madden, in Lucas Oil Victory Lane for the ninth-time in his career, commented “With about 20-23 laps to go I developed a skip in the motor. It was down just a little bit, but it worked out for us. I knew we had to get the lead pretty early if we were going to have a shot at the win. I was trying to set my own pace, but that is so difficult now in our sport because the competition is so stout.”
“This is awesome,” Madden said when informed that he was another new winner on the series tour in 2018. “I told Barry I wanted to go to Rome today. We traveled eight hours from Ohio. My crew did a heck of a job getting this car ready today. Thanks to everyone that is a part of our sport and our team.”
“The track was a really awesome tonight. When we first got here I saw how wet the bottom was and thought that it was going to be a bottom-feeding race track. I didn’t get a glimpse of Tim [McCreadie] there at the end. I figured he was in the middle or top of the track. We had a good race car. It’s good to win in front of this big crowd.”
McCreadie felt like the last caution doomed his chances of overtaking Madden for the win. “The last caution didn’t help me. It was a green-white-checkered finish I was hoping it was going to be something different. On the long green flag runs I started to track Chris [Madden] down a little bit. I didn’t know if he could see me or not. The oil tank got knocked out of the car in hot laps after we were really good. That put us behind. We only got one-lap to time and that kind of put us behind as well. To overcome that and pass a bunch of cars in the feature we are really happy about that.”
Davenport leaves the race with a 300-point stranglehold on the championship standings. “I was just points racing tonight. I tried to stay off the cushion. I was just biding my time tonight. I got caught behind one car there and on the restarts, he would get passed me and then I would pass him back. I finally got clear of him and got to rolling pretty decent on the bottom. Congrats to Chris, Barry and Lance on the win. This is probably one of the best group of drivers ever assembled on a touring series. I hate it for Josh tonight, he was up on the wheel doing what he had to do. We are close to our ultimate goal of winning the championship.”
The winner’s Barry and Lance Wright-owned Barry Wright ICON Chassis is powered by a Clements Racing Engine and sponsored by: Harrod Logging, C&H Paving, Davis Diesel Service, Century Plastics, Penske Racing Shocks, Millwood Plumbing, Henderson Amusement, Modern Images, Crowder Trucking, VP Fuels, and All-Star Performance.
Completing the top ten were Michael Page, Jason Hiett, Dennis Erb Jr., Clint Smith, and Gregg Satterlee.
Lucas Oil Late Model Dirt Series
Race Summary
Sunday, September 30, 2018
Lucas Oil Rome Showdown
Rome Speedway – Rome, Ga.